Biden’s granddaughter, Naomi Biden, posted one of the photos in the meme — of the Biden family — on her Instagram account in November 2021. But the other three photos are mischaracterized by the meme: One was not taken in the U.S., another was taken before Biden became president and a third was taken outside of the U.S. and before Biden’s presidency. 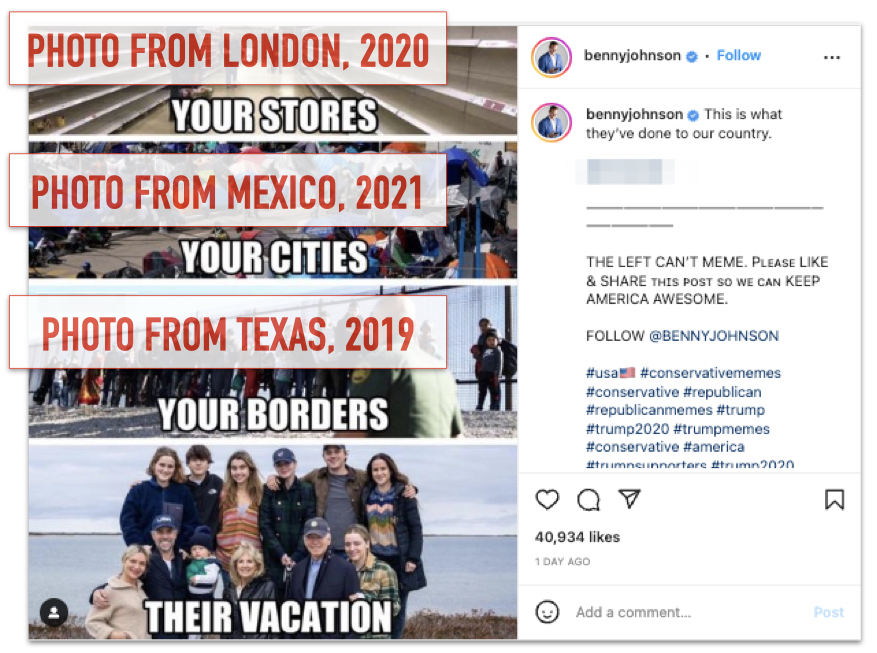 The meme was originally posted June 19 by a Twitter account that regularly shares content making fun of Biden. It showed four photos, each with text overlaying it.

"Your stores," the text said over a photo of a supermarket with empty shelves.

"Your cities," the text said over a photo of tents popped up along a street.

"Your borders," the text said over a photo of migrants lining a fence at the southern U.S. border.

"Their vacation," the text said over a photo of Biden with his family.

"This is what they’ve done to our country," Johnson wrote in a June 20 Instagram post sharing the meme.

But aside from the November 2021 photo of Biden with his family, none of the pictures highlighted in the meme depict the U.S. under Biden’s presidency, according to reverse image searches.

The photo of empty shelves at "your stores" was actually taken at a supermarket in London in March 2020, before Biden took office and after the outbreak of the COVID-19 pandemic.

The photo of the encampment in "your cities" was actually a photo of a makeshift migrant camp in Tijuana, Mexico, just across the border from San Diego. It was captured in March 2021.

The photo of migrants at "your borders" was actually snapped in March 2019, before Biden became president, south of the border fence in El Paso, Texas.

Johnson, the chief creative officer at Turning Point USA and a Newsmax host, did not respond to PolitiFact’s requests for comment, but he deleted his post shortly after we reached out.