Members of Congress and activists demonstrate for abortion rights in front of the Supreme Court on July 19, 2022 in Washington. (AP)

Rep. Alexandria Ocasio-Cortez, D-N.Y., and 16 other House Democrats were arrested during a July 19 rally outside the Supreme Court to protest the decision to overturn Roe v. Wade.

The U.S. Capitol Police said the arrests were in connection with crowding, obstructing or incommoding after the protesters continued blocking a street despite three warnings from the police. Ocasio-Cortez and Rep. Ilhan Omar, D-Minn., posted photos of their arrest paperwork to their Instagram stories indicating that they had been ordered to pay $50 fines. 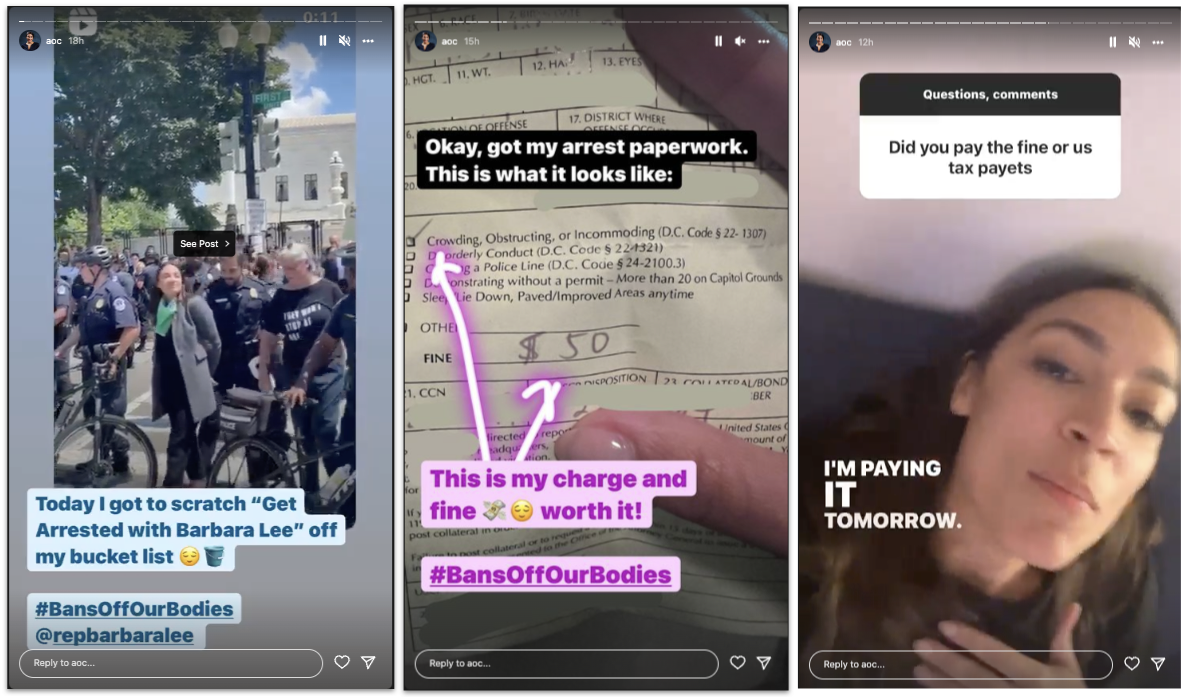 Across social media, however, conservative critics of Ocasio-Cortez and promoters of the QAnon conspiracy theory falsely claimed that the entire ordeal was staged.

"The D.C. Police fake arrest AOC. I wonder what else they fake?" said a post from a QAnon channel on Telegram, in a reference to the Jan. 6, 2021, insurrection at the U.S. Capitol.

"AOC and ‘the squad’ are the best at one thing, self-promotion. That’s all this was about," said former Rep. Doug Collins, R-Ga., on Fox Business Network. "I guess the attention wasn’t on them enough lately, so they decided to go out and get basically fake arrests."

"Why would AOC be faking being arrested," said Graham Allen, a conservative podcaster and Turning Point USA contributor, in Twitter and Instagram posts shared after the arrests. "Only to forget and then wave to people?! What kind of crazy is this?!"

The Instagram post was flagged as part of Facebook’s efforts to combat false news and misinformation on its News Feed. (Read more about our partnership with Facebook.)

Ocasio-Cortez was arrested, and there’s no evidence it was faked. She retweeted a video of the arrest taking place, and she said on her Instagram story that she would pay the fine in cash.

Shortly after PolitiFact reached out to her office, the congresswoman addressed the allegation that she had staged the arrest in a post shared to her Instagram story.

"As for ‘faking arrest,’ that is also false," Ocasio-Cortez wrote. "I was arrested, charged, and fined. Police confirmed this fact and I posted the paperwork." 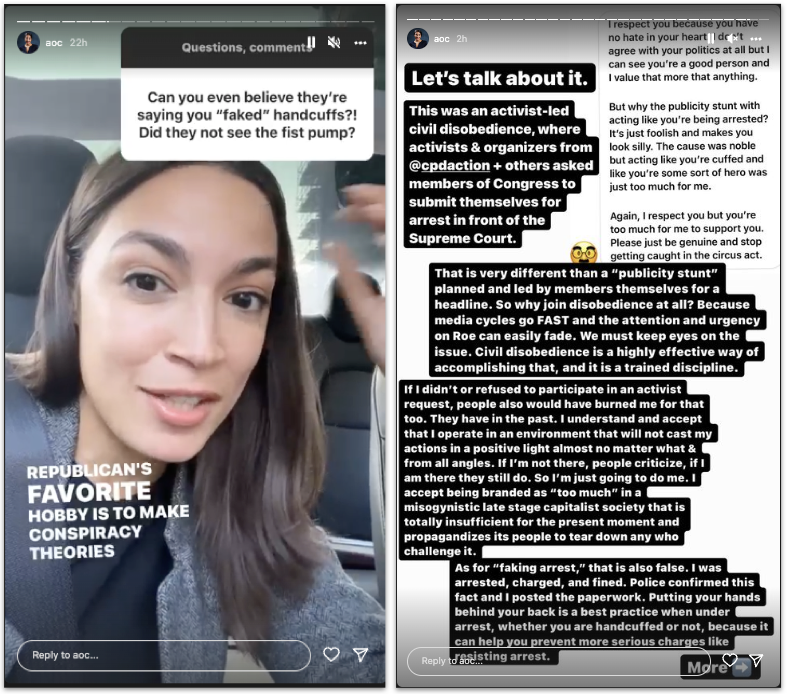 The offices of Omar and Rep. Jackie Speier, D-Calif., who was also arrested, confirmed to PolitiFact that the arrests were real and Ocasio-Cortez was among those arrested.

Cori Bush, D-Mo., shared a photo with Ocasio-Cortez on Twitter and wrote that "they arrested us." A freelance journalist also tweeted photos of Ocasio-Cortez being processed for her arrest, and several news organizations published reports detailing what happened.

Ocasio-Cortez put her hands behind her back

The claim that Ocasio-Cortez faked her arrest was an extension of a similar narrative that was spread by other conservative commentators and media outlets, such as the Post Millennial.

As the police escorted Ocasio-Cortez away, she walked at first with her hands crossed behind her back. Then she pumped a fist in the air. That change in posture led to accusations that she was pretending to be handcuffed for show at the beginning. (The U.S. Capitol Police told PolitiFact none of the demonstrators were handcuffed because the arrests were noncustodial.)

But Ocasio-Cortez also addressed those allegations on her social media.

"Republicans’ favorite hobby is to make conspiracy theories out of everything to distract you and keep you from talking about what’s actually important, which is the fact that they are trying to take away your right to bodily autonomy," Ocasio-Cortez said in an Instagram story. "If I was faking that, why would I intentionally fist pump somebody? It’s so silly."

"Putting your hands behind your back is best practice when under arrest, whether you are handcuffed or not, because it can help prevent more serious charges like resisting arrest," she wrote in another Instagram story. She said the same on Twitter, adding, "No faking here."

An Instagram post said Ocasio-Cortez was "faking being arrested" during an abortion-rights protest outside the Supreme Court.

Ocasio-Cortez’s arrest was not faked; it took place on video and was corroborated by news reports, social media postings and the offices of other lawmakers who were arrested alongside her. Ocasio-Cortez called the claim "false."