Tony Evers
stated on January 22, 2020 in the State of the State:
“I delivered on my campaign promise for a 10% tax cut for Wisconsin families.”

Gov. Tony Evers recognizes people in the gallery before his State of the State address Wednesday, Jan. 22, 2020 at the Capitol in Madison, Wis. (Mark Hoffman/Milwaukee Journal-Sentinel)

Gov. Tony Evers has run into a Republican buzzsaw in attempting to get many of his policies through the state Legislature.

But he still identified plenty of progress to celebrate in his latest State of the State speech. He touted changes in education, transportation and healthcare, then circled back to an earlier pledge on taxes.

We’ll need to look back at his promise and forward at tax projections to see if that’s the case.

Evers’ speech didn’t go into much detail on the nature of that tax cut, but he was quite specific in 2018 on the campaign trail.

Under Evers’ plan, everyone with annual incomes up to $100,000 would receive a 10% tax cut. Evers would also provide the tax cut to families making up to $150,000. Altogether, this cut would reach approximately 86% of tax filers.

That news release remained on Evers’ campaign website as of late 2019 but has been removed. A copy is still accessible through archive.org.

Regardless, that gives us a firm benchmark to examine Evers’ claim that he "delivered" on that promise.

When asked for evidence of Evers’ claim, spokeswoman Melissa Baldauff pointed to Wisconsin Department of Revenue projections for the 2020 tax year.

The agency generated projected tax impacts for each income bracket based on the policies written into law through the budget and an accompanying bill (Acts 9 and 10).

Department of Revenue spokeswoman Patty Mayers noted these are estimates that can change, but they are the best existing projections for the tax changes passed under Evers.

Baldauff highlighted estimates for married filers with incomes between $30,000 and $60,000. Each of the three income brackets in that range are projected to see tax cuts of 10% or more.

Dan O'Donnell
stated on February 3, 2021 in in a commentary
November election data shows a “stunning anomaly in the rejection rate of absentee ballots.”

But Evers promised a tax cut to all families with an income of $150,000 or less, and the full Department of Revenue projections show tax brackets under and over that amount fell well short of that 10% mark.

Across all income brackets under $150,000, the changes from Acts 9 and 10 generate an average tax cut of 4.9% for married filers who owe taxes — half of what Evers promised. That works out to about $129 per tax return.

If you look at the impact in terms of people, about one-fourth of married filers will see the promised cut of 10% or more, according to the Department of Revenue projections. That’s among the group that owe some amount of taxes and fall in the under-$150,000 bracket Evers referenced. 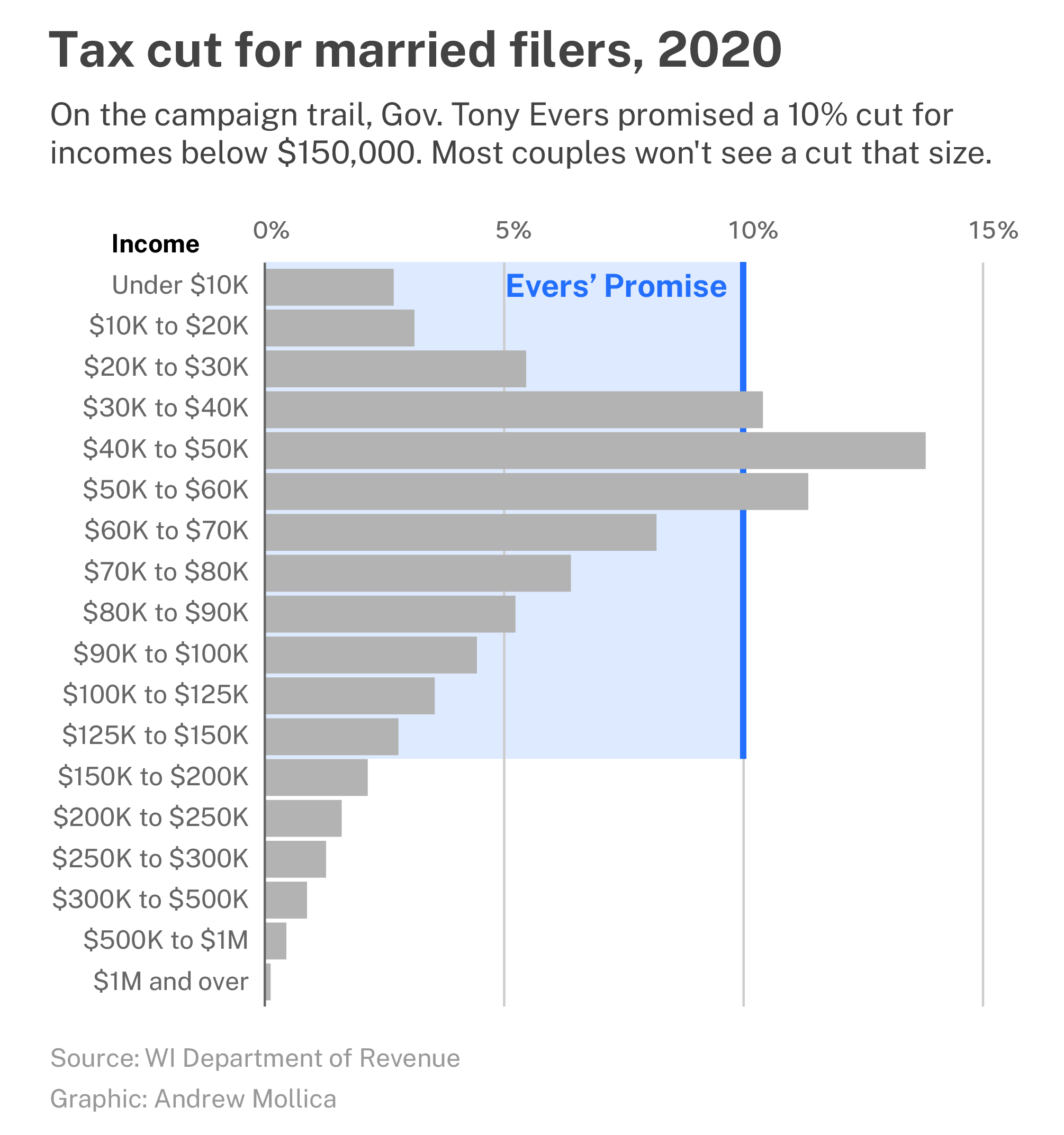 Baldauff asserted Evers always intended to focus his 10% tax cut on "middle-class" families, meaning the 10% tax cut in the $30,000 to $60,000 fulfilled his promise. But neither his original pledge nor his wording in the State of the State reflected that.

In any case, the definition of middle-class offered by Baldauff doesn’t make much sense in a state where the median family income is about $59,000. Her range only goes down from the median, not up.

We should also note that we’ve visited this topic before with our Evers-O-Meter, which tracks promises Evers made while seeking the state’s highest office.

In July 2019, we rated a promise to cut middle class taxes by 10% as a Compromise, since initial projections showed Evers’ proposed tax break was cut roughly in half by the Republican Legislature. That’s in line with the updated projections.

We focused on married filers since Evers’ speech referred to families, but we should note he also promised a 10% tax cut to "everyone" filing an individual tax return with an income of $100,000 or less.

The latest projections for single filers show a similar trend to the married filers in 2020. Those with incomes of $20,000 to $40,000 are expected to see a tax cut of more than 10%, but the reduction is noticeably less for the income brackets above and below that. 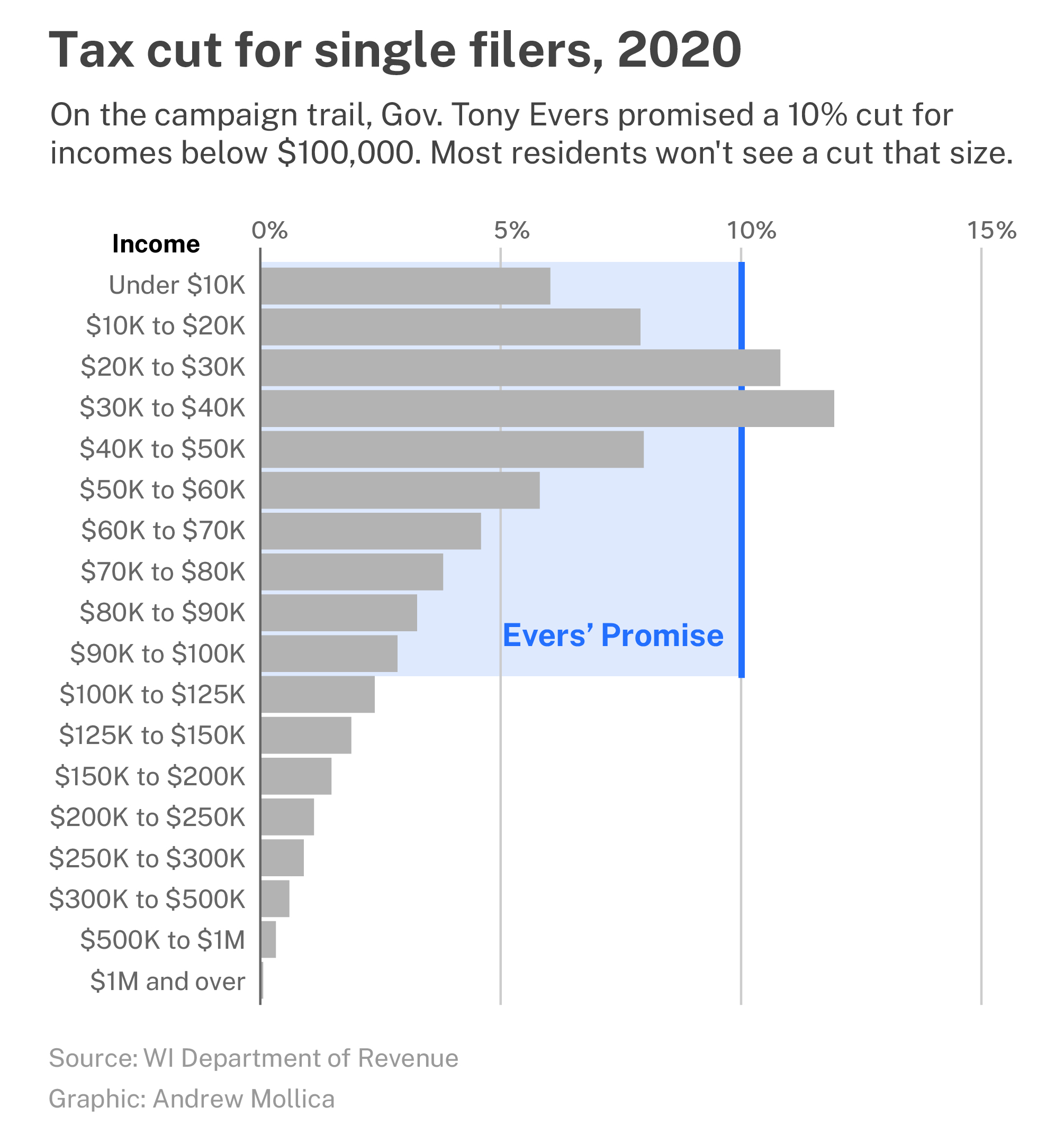 Evers said he "delivered" on his promise of a 10% tax cut for Wisconsin families.

The final changes passed into law will yield a 10% tax cut for only about one-fourth of that group, according to the latest projections. On average that sub-$150,000 group will see a tax cut of 4.9%.

Only married filers with incomes between $30,000 and $60,000 are expected to see an average cut of 10% of more. In other words, there’s an element of truth, but it ignores critical facts that would give a different impression.

Which is our definition of Mostly False.

Jim Steineke
stated on January 17, 2021 a TV interview:
Gov. Tony Evers “has the authority and revenue necessary” to upgrade the Wisconsin unemployment system without the Legislature.

Jim Steineke
stated on January 26, 2021 a tweet:
Assembly Republicans “have come to the table” and were part of “give and take” compromise on a coronavirus bill.

Rebecca Kleefisch
stated on January 14, 2021 a tweet:
“Wisconsin is second to last in the Midwest in our vaccination rate and the governor says he’s ‘satisfied.’”

Devin LeMahieu
stated on January 10, 2021 a TV interview:
"It takes quite a while on Election Day to load those ballots, which is why we have the 1 a.m. or 3 a.m. ballot dumping in Milwaukee."

Jonathan Brostoff
stated on January 7, 2021 a tweet:
The woman killed during the Jan. 6 U.S. Capitol assault was shot by a Secret Service agent, not Capitol Police.

Mike Gallagher
stated on January 3, 2021 a statement:
“Congress has one job here: to count electoral votes that have in fact been cast by any state.”