Bloggers
stated on February 9, 2020 in a story:
Says Melania Trump lied under oath in 2013 about graduating from college with a bachelor’s degree in architecture.

The liberal website "Political Flare" posted a story in February 2020 about an answer Melania Trump gave during a 2013 court deposition that involved her defunct caviar skincare line.

Its headline: "BUSTED: Melania Trump Lied Under Oath in 2013 About Graduating From College With a ‘Bachelor’s in Architecture.’"

The story was flagged as part of Facebook’s efforts to combat false news and misinformation on its News Feed. (Read more about our partnership with Facebook.) In this case, the headline is accurate, but the news is several years old.

Melania previously touted the inaccurate credential on her old website, MelaniaTrump.com, before it was scrubbed in 2016 and its URL rerouted to the Trump Organization website. It now goes to her Facebook page.

Racked, a defunct fashion blog, in 2016 investigated what happened to Melania Trump’s skincare line, which disappeared along with the website. Its report unraveled a tale about multiple lawsuits between multiple rich people. The story included detail from the deposition in which Melania again provided a false account of her educational background.

A number of reports found that while Melania gained entry to the University of Ljubljana in Slovenia, she dropped out in her first year. Shortly after the 2016 election, a new biography on the future first lady was posted on Trump’s website that said she "paused her studies to advance her modeling career in Milan and Paris." The change was noted in a number of news reports.

The current biography of Trump on the White House website does not include anything about her educational background.

The 2013 lawsuit that Racked detailed was a result of a business partner feud and the eventual failure of the holding company of Melania’s heavily promoted skincare line that apparently never made it into stores.

A screenshot of the court deposition shows that an attorney asks Melania to please "explain to the Judge your formal education including what schools you attended and from which you graduated?"

"I attended and graduated from design school, from Fashion and Industrial Design School and also attended, graduated from architecture degree, bachelor degree," she responds. 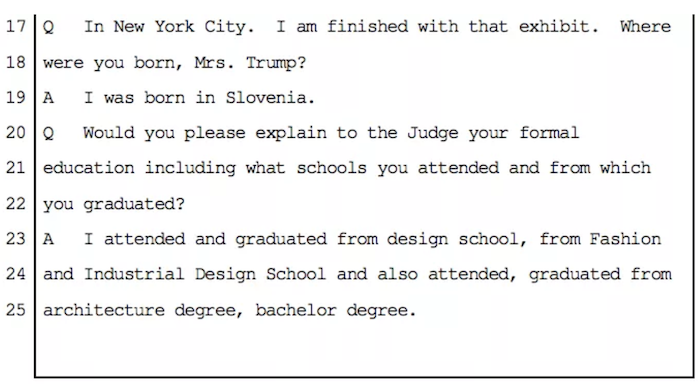 We reached out to the White House but did not hear back in time for publication.

Evidence and previous reporting shows that Melania falsely stated she graduated college with a bachelor’s degree while under oath. But Political Flare’s inflammatory headline, along with others published by left-leaning websites, makes readers believe this is a new piece of information. It isn’t.

Web Archive PoliticalFlare, BUSTED: Melania Trump Lied Under Oath in 2013 About Graduating From College With a ‘Bachelor’s in Architecture’, Feb. 9, 2020