The post shares a collage of photos that include Obama and Winfrey, as well as Hillary Clinton and Ellen DeGeneres. Text above the photo says, "Elite/Hollywood figures on house arrest with ankle monitors, due to child trafficking crimes." 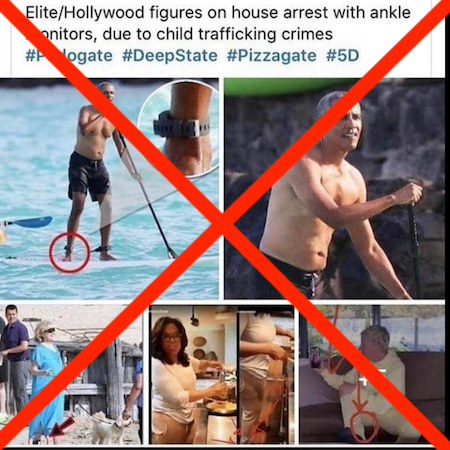 The post attempts to prove this by revealing that all are wearing ankle bracelets in the images.

But some of the photos are obscured, while others were digitally altered. One image accurately shows ankle wear on Obama, but it’s not a house arrest monitor.

First, there is no evidence that Obama, Winfrey, DeGeneres or Clinton are involved in child trafficking and none have been arrested, or placed on house arrest, for any crime.

The photos of DeGeneres and Winfrey are both obscured and show bulges underneath their pants, near their ankles. This is far from proving these are house arrest monitors, and we couldn’t track down the original images. Winfrey also addressed false rumors in March that she had been arrested.

The photo of Hillary Clinton was taken in 2014 in the Hamptons. The Facebook post’s version was digitally altered to include a device on her right leg. Clinton is not wearing any kind of bracelet or monitor, on either leg, in the original photo or in other photos from that day.

The photo of Obama shows him paddle boarding in January 2020 in Hawaii. The bracelet on his ankle is real, but it’s not a house arrest monitor. The device is called a "SharkBanz," which uses technology to deter a shark attack. (Note: It’s difficult to be on house arrest and also paddleboard in Hawaii).

Daily Mail, A straw visor and muumuu for Hillary and SoulCycle shorts for Bill: Relaxed Clintons enjoy some downtime on the beach with their dogs, Aug. 8, 2014