Facebook posts
stated on June 22, 2020 in a Facebook post:
Says NASCAR announced that driver Bubba Wallace mistook a serpentine automotive belt for a noose in his garage stall.

A noose was recently found in the garage stall of Black driver Bubba Wallace during a NASCAR race at the Talladega Superspeedway in Alabama.

The incident occurred just weeks after Wallace — who is the only fulltime Black driver in NASCAR’s Cup Series — painted his car in a Black Lives Matter scheme for a race and successfully helped push NASCAR to ban the Confederate flag at its events and facilities.

NASCAR issued a statement saying it’s launching an immediate investigation. The FBI and U.S. Justice Department said they are also looking into it.

But one Facebook user claims that these investigations are apparently already over, sharing a purported announcement from NASCAR that Wallace confused a circular serpentine automotive belt for a noose.

"Talladega, Ala. – NASCAR said a serpentine belt was confused as a noose in Bubba Wallace’s garage stall at Talladega Speedway in Alabama on Sunday. Wallace, who is from Mobile, is the only Black driver in the Cup Series

In a statement released Sunday night, NASCAR said, ‘Late this afternoon, NASCAR was made aware that something that resembled a noose was found in the garage stall of the 43 team. We were angry and outraged, and cannot state strongly enough how seriously we took this allegation. We launched an immediate investigation, and determined Bubba Wallace had mistaken a 26" serpentine automotive belt for a noose.’" 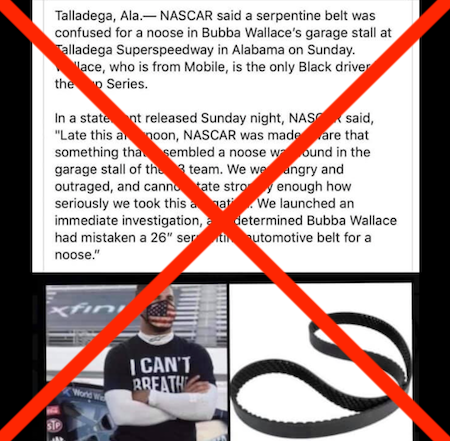 In the caption, the user wrote: "What a moron! Can’t drive and don’t even know what a serpentine belt is. Get everybody all stirred up over your stupidity AGAIN!!!!"

Ryan Fournier
stated on June 11, 2020 in a status
“All money donated to Black Lives Matter goes directly to Act Blue, a Democrat Super PAC that then feeds the money to Democrat candidates.”

NASCAR made no such announcement. The post was manipulated to make it look like a NASCAR statement.

Despite its appearance as a news story, the supposed development has not been reported by any news organization. The most we could find was this unsourced photo on social media.

The faux statement contains some similarities to the real one that NASCAR released on June 21, but it also has notable differences, particularly the omission of a serpentine belt.

Wallace released his own statement, and in a show of support, dozens of drivers and crew members pushed Wallace in his car to the front of the field during pre-race activities on June 22.

This isn’t accurate. NASCAR has made no such statement as investigations continue.

(Update: On June 23, 2020, NASCAR released a subsequent statement about the incident. It read: "The FBI has completed its investigation at Talladega Superspeedway and determined that Bubba Wallace was not the target of a hate crime. The FBI report concludes, and photographic evidence confirms, that the garage door pull rope fashioned like a noose had been positioned there since as early as last fall. This was obviously well before the 43 team’s arrival and garage assignment. We appreciate the FBI’s quick and thorough investigation and are thankful to learn that this was not an intentional, racist act against Bubba. We remain steadfast in our commitment to providing a welcoming and inclusive environment for all who love racing.")

Facebook posts
stated on May 31, 2020 a Facebook post:
Says President Trump tweeted that he spoke with George Floyd’s family and said they were “honored” to hear from him.

Bloggers
stated on May 13, 2020 a story:
Says Nancy Pelosi tried “once again” to include abortion funding in the latest coronavirus bill.