Joe Biden
stated on May 21, 2020 in a video:
"You weren't allowed to own a cannon during the Revolutionary War as an individual."

• The Biden campaign didn’t offer evidence to support his statement, and historians of the period are dubious laws against private cannon ownership existed.

• There are documented instances of privateers, or privately owned vessels that legally attacked enemy ships during wartime, setting sail with cannons during the period.

Joe Biden, the presumptive Democratic presidential nominee, recently sat for a video with Wired, part of the magazine’s series of interviews in which celebrities answer the most searched-for questions about themselves on the internet.

One of the questions Biden addressed was, "What is Joe Biden’s stance on gun control?" He proceeded to answer that he favors outlawing assault weapons. 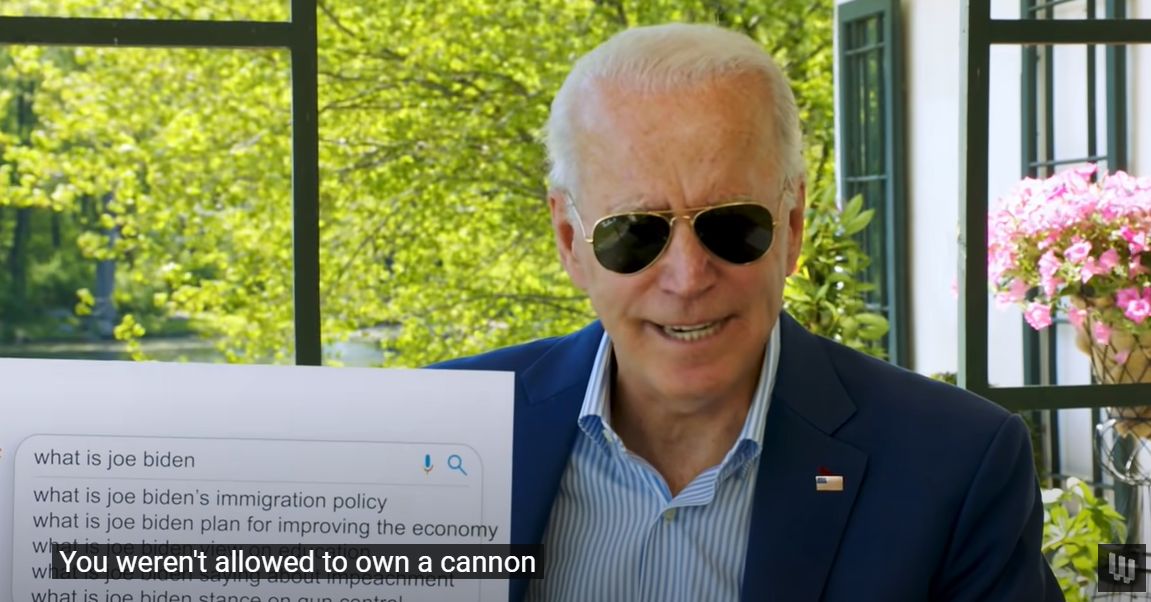 A reader suggested we look at Biden’s assertion on Revolutionary War cannons. The historians we reached out to were dubious.

To confirm Biden’s point, "you would need to point to something — a law, or a tradition, or a case where someone was not allowed to possess a cannon," said University of Pennsylvania law professor Kermit Roosevelt.

But the Biden campaign was unable to point to a specific law. "The vice president's point is that to help end the tragic epidemic of mass shootings that is taking so many American lives, we need to ban weapons of war from our streets," the campaign told PolitiFact.

Historians say they are doubtful that there were laws to bar individual ownership of cannons during the Revolutionary War period.

"It seems highly unlikely that there were restrictions on the private ownership" of cannons, said Julie Anne Sweet, a historian and director of military studies at Baylor University.

David Kopel, the research director and Second Amendment project director at the free-market Independence Institute, agreed. "I am not aware of a ban on any arm in colonial America," he said. "There were controls on people or locations, but not bans on types of arms."

The legal framework in the colonies was haphazard during the Revolutionary War period.

"At that time, there was no United States, just a bunch of very confused former colonies trying to cooperate, and often failing, to defeat the British military," Sweet said. "Any sort of gun regulations would have been at the local level, and therefore incredibly difficult and tedious to chase down. The new states were still writing new constitutions and probably did not take this matter into consideration."

There is at least one group of private citizens that owned cannons during the period: privateers.

Privateers were privately owned and operated ships that in wartime captured enemy ships for profit. While privateers received a license from the government that allowed them to avoid being prosecuted for piracy, they were not a part of the official navy. So any cannons they set sail with (or that they seized from the enemy) would be private property, not the property of the government or the regular military.

The 1899 book "A History of American Privateers" by Edgar Stanton Maclay notes several cases in which privateers during the Revolutionary War set sail using cannons.

Biden said, "You weren't allowed to own a cannon during the Revolutionary War as an individual."

The campaign was unable to come up with an example of a law banning private ownership of cannons, and historians of the period doubt that any existed. To the contrary, there are documented instances of privateers, or privately owned vessels, setting sail with cannons during the period.

Email interview with Dennis Baron, professor of English and linguistics at the University of Illinois at Urbana-Champaign, June 29, 2020

Email interview with Kermit Roosevelt, law professor at the University of Pennsylvania, June 29, 2020