Online disinformation about the coronavirus continues to spread, sometimes more quickly than the disease itself, but the rumors aren’t based in fact. There is no evidence linking a deadly case of coronavirus to a Chinese restaurant in Albany, N.Y.

At first glance, an image on Facebook appears to be a screenshot of a post by ABC News sharing a story about the coronavirus. Anchored by an image of a Chinese restaurant, the headline of the supposed news storysays, "Man visited Albany, N.Y. days before dying from coronavirus."

There is no evidence for these claims. The image is not a real ABC News post. 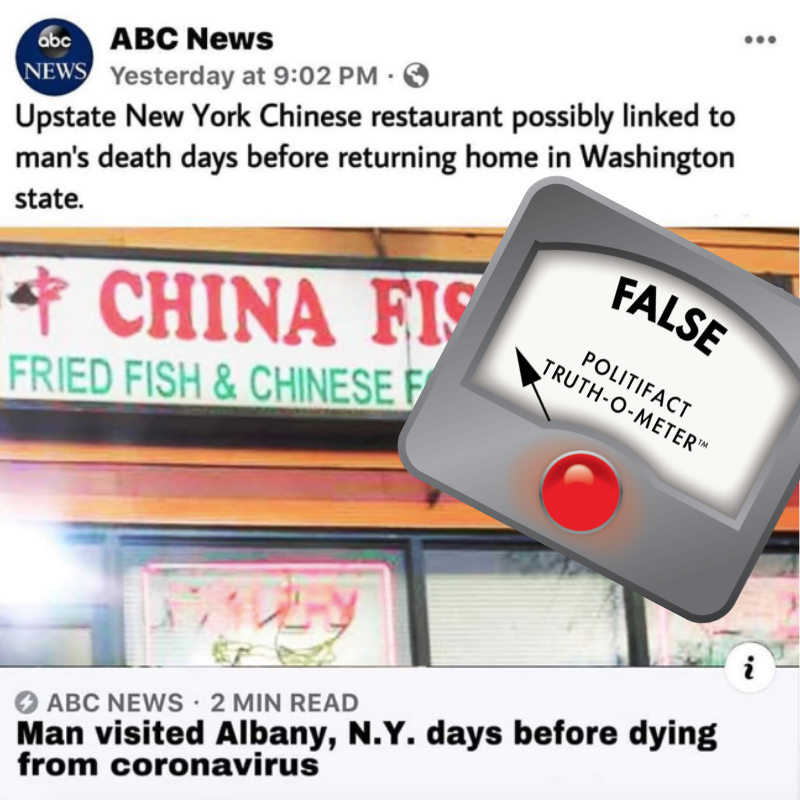 All nine U.S. deaths linked to the illness happened in Washington state, as of March 3, but there is no evidence that any of the individuals who died in Washington had recently traveled to New York.

On Feb. 28, news reports declared a King County, Wash., man the first person in the U.S. to die from the disease, but it was later discovered some deaths linked to the coronavirus occurred as early as Feb. 26.

By March 2, Washington health officials had confirmed six coronavirus deaths in the state, and three more individuals had died by March 3. Seven of the Washington deaths were linked to a nursing home facility, Life Care Center of Kirkland.

No news reports mention any ties to an Albany Chinese restaurant.

There is also no evidence this image is actually a screenshot of an ABC News post. The news organization has not posted this story on its Facebook feed, and no ABC News stories make the same claims as the post.

When comparing this post to actual ABC News Facebook posts, there are a number of differences. The most obvious difference is that the "ABC News" title at the top of a Facebook post typically appears in blue, given that it links to the organization’s main Facebook feed. The post does not match ABC News’ usual font and there are also no other recent Facebook posts from ABC News with an estimated reading time for their articles.

Seattle Times, "Coronavirus daily update, March 4: What to know today about COVID-19 in the Seattle area, Washington state and the nation," March 4, 2020

Seattle Times, "Coronavirus timeline: How the outbreak has unfolded," March 2, 2020

Seattle Times, "King County patient is first in U.S. to die of COVID-19 as officials scramble to stem spread of novel coronavirus," Feb. 29, 2020

Facebook posts
stated on July 21, 2021 a Facebook post:
A photograph shows members of the U.S. women’s soccer team kneeling during the national anthem at the Tokyo Olympics.

Tweets
stated on July 15, 2021 a tweet:
“You must give EVERY PENNY” of the advance child tax credit payments back when you file your 2021 taxes.

Instagram posts
stated on May 30, 2021 an Instagram post:
"Airlines are meeting today to discuss the risks of carrying vaxed passengers due to the risk of clots and the liabilities involved.”

Facebook posts
stated on May 17, 2021 a video on Facebook:
An electromagnetic radiation detector can detect radiation from someone’s COVID-19 vaccination.

Bloggers
stated on May 6, 2021 a blog post:
"Scientists Claim to Spot Fungus Growing on Mars in NASA Rover Photos”

Facebook posts
stated on April 27, 2021 a video on Facebook:
"The Unvaccinated Beware, COVID-19 mRNA Shots Cause Death and Disease Through GMO Shedding"

Sherri Tenpenny
stated on April 20, 2021 an Instagram video:
Officials “recommend that women who get one of these (COVID-19) shots should absolutely not get pregnant for at least the first two months after they’ve been injected.”

Viral image
stated on March 29, 2021 a Facebook post:
In this photo, “Man uses a gun to rob a Texas convenience store. Man was shot by every customer inside the store”