A year-old claim about Gov. Tony Evers and firearm confiscation is getting new life online amid the coronavirus pandemic.

Many on Facebook have recently picked up a story from April 2019 headlined "Wisconsin gov. pushing firearm confiscation orders."

When shared, no date for the story is visible on Facebook.

The new life and lack of date gives this claim a very different ring amid the flurry of executive orders by Evers.

The first-term Democrat has taken a series of dramatic steps to limit activity in Wisconsin as he and officials across the country take steps to contain the spread of coronavirus. His latest "Safe at Home" order, issued Tuesday, March 24, 2020, closed non-essential businesses and gathering places until April 24.

But none of those orders deals with gun confiscations. 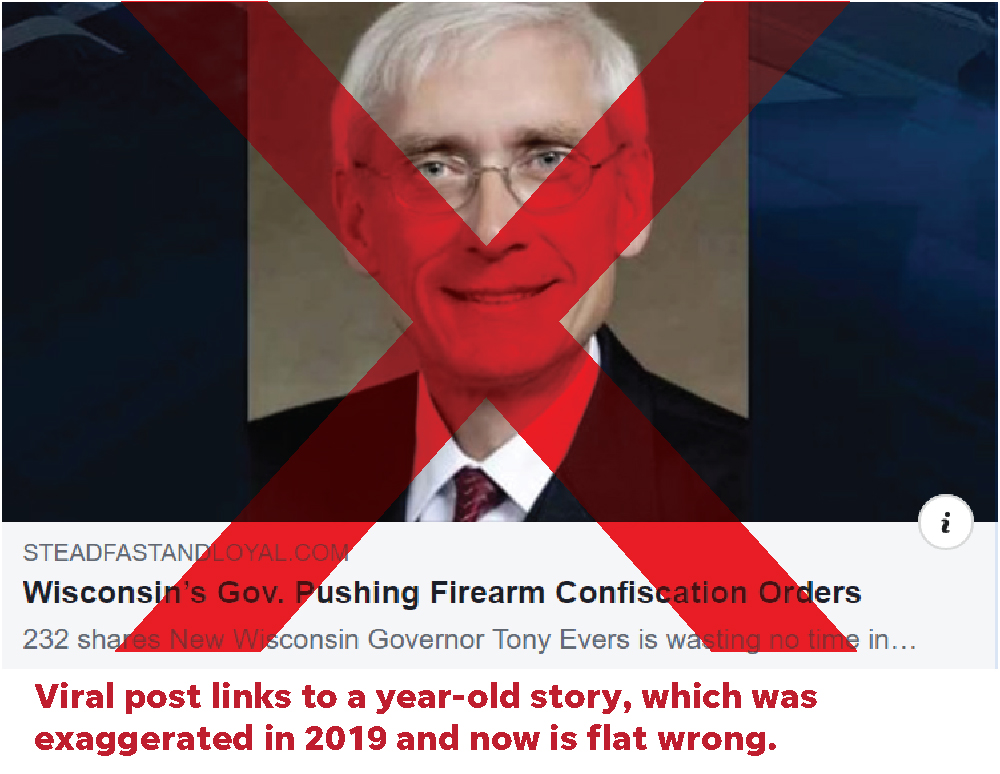 The headline was misleading in 2019.

The article, from a website called Steadfast and Loyal, describes Evers as "attacking the Second Amendment." But it offers zero proof for that claim or the headline reference to the governor "pushing firearm confiscation orders."

Instead it pastes in a series of paragraphs from a similarly headlined story from far-right Breitbart news, published back in January 2019.

But neither story actually details Evers proposing any such thing. The Breitbart story — as quoted by Steadfast and Loyal — refers to a WISN-TV story about Attorney General Josh Kaul, a Democrat, calling for red flag laws during his inaugural address.

We will note, though the stories didn’t, that Evers had generally voiced support for Kaul’s plan in January 2019.

But there’s a huge difference between red flag laws and the widespread gun seizures implied by this headline.

Red flag laws provide a mechanism — with a judge’s approval — to take guns from people exhibiting dangerous behavior before they harm themselves or others.

At the time the Steadfast and Loyal article was written, Evers hadn’t proposed anything in this vein, but he later did, in November 2019. He called a special session of the Legislature to consider proposals for a red flag law and universal background checks, but Republicans who control the Assembly and Senate immediately closed the session without action.

Under Evers’ proposal, a law enforcement officer, family member or household member could petition a judge to intervene if they believe an individual is a danger to self or others. The judge then could issue a preliminary order good for up to 14 days, during which the guns could be taken away. A judge would then schedule a full hearing, where the gun owner could present his or her case and the judge could issue a final order valid for up to one year.

That was an overreach in 2019, and it’s even more absurd now.

The article was referring to red flag laws, but at the time of this post Evers hadn’t proposed one yet. And more importantly, red flag laws are a far cry from the implication this headline gives of some form of widespread gun confiscation.