Amid a pandemic that is believed to affect elderly people most severely, the deaths of several young people from COVID-19 around the world have drawn special attention — and generated misinformation.

A post on Facebook falsely claims that different media outlets misused a boy’s image to report that he died from the coronavirus three times in three different countries.

The post shares a collage of screenshots of various news reports that appear to include the same image. The text above reads: "Child dies in 3 countries of corona virus." 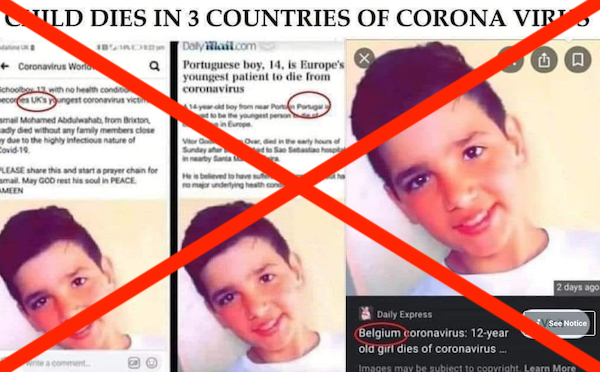 The photo depicts Vitor Rafael Bastos Godinho, a 14-year-old Portuguese boy who died at the end of March after testing positive for the novel coronavirus. The Portuguese newspaper Record wrote about his death.

Other news outlets also reported on Godinho’s death and correctly identified him, including the United Kingdom’s Daily Mail, whose article appears in the center of the collage.

The Daily Express, another U.K. outlet in the collage, wrote about a 12-year-old girl who died from COVID-19 in Belgium. That story includes Godinho’s photo, but not in connection with the girl. It includes his photo in a reference to another young person who died from the virus and correctly identifies him in the caption.

Lastly, an article by the U.K.’s Daily Record that appears in the Facebook post didn’t use Godinho’s photo at all.

That March 31 story covered the death of a 13-year-old boy, Ismail Mohaemd Abdulwahab, from the U.K. There is no photo of any child in the article.

Godinho’s photo does turn up in image searches on the Abdulwahab story headline, but they link to accurate reports about Godinho’s death.

All the articles referenced in the post correctly identify the boy in the photo and did not misuse his image. We rate this Facebook post Pants on Fire!

The Record,  Vítor Godinho was a futsal player and was 14 years old: he died today with coronavirus, March 29, 2020