One America News
stated on May 8, 2020 in a Facebook video:
“The mainstream media pretended there was a deadly surge in COVID cases thanks to Wisconsinites voting.”

The election has remained a hot topic nationally, as it was effectively a study in what can happen when a large number of people go out in public together amid a lockdown order. It’s a unique datapoint as politicians and citizens alike argue over how and when to re-open.

And one TV outlet says you’re being lied to about it.

On the One America News Network, host Liz Wheeler described it this way in a May 8, 2020, clip labeled online as "What the (mainstream media) was afraid to tell you": 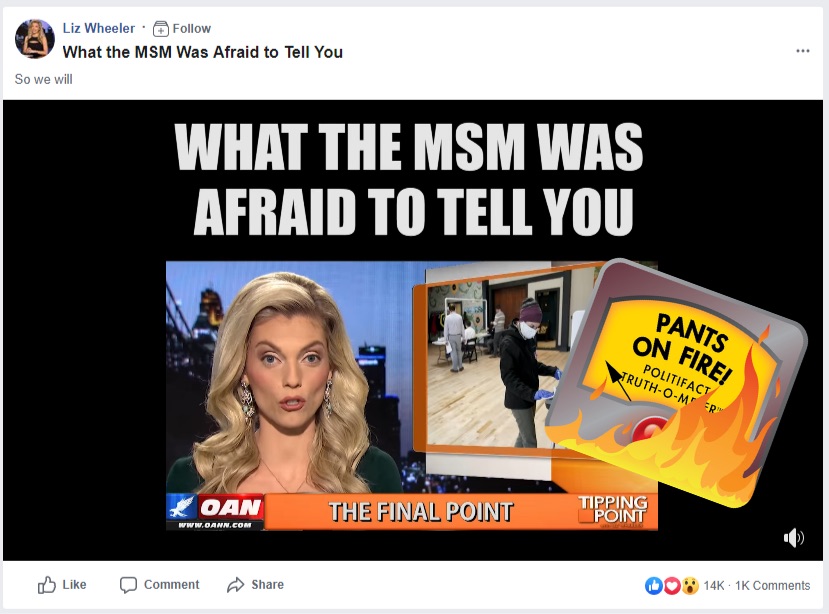 Wheeler is right about there being no evidence of a surge. We’ve repeatedly debunked claims that there was one.

But her generalization about "mainstream media" claiming otherwise? That’s ridiculous.

Let’s take a closer look at how this topic has been covered by prominent media outlets.

For starters, let’s be clear that there was no election "surge."

As of May 11, 2020, the Wisconsin Department of Health Services identified 71 people who tested positive for COVID-19 after voting or working the polls in the April 7 election, according to spokeswoman Elizabeth Goodsitt. The important caveat here is that it’s impossible to say how many were infected at the polls since some reported other possible exposures.

The 71 tally runs from April 9 to 21, when the two-week incubation period for the coronavirus would have ended. There were 1,864 positive tests in that span in Wisconsin, so the cases known to intersect with election activity accounted for less than 4% of that total.

Now on to the "mainstream media" reports.

Wheeler’s report cites no sources for the claim the media said there was a surge in cases, so we cast a wide net looking at news coverage ourselves.

CNN — a favorite target for far-right claims of media bias — reported on April 22 about what was then 19 cases in people who voted or worked the polls. The third and fourth paragraphs of the story detail the caveat that those people had other exposures, so it’s impossible to say the election was the source.

The Associated Press, reporting on updated data April 29, said 50 people connected to the election had tested positive. It noted the origin caveat in the second paragraph. Like the CNN and ABC reports the week before, it contained no hyperbolic language calling this a surge or anything close to that.

In-state sources were even more clear.

An April 22 Milwaukee Journal Sentinel story was headlined, "Two weeks after election, COVID-19 cases have not spiked in Wisconsin but experts urge caution about conclusions."

A Wisconsin State Journal report on April 23 worked the "can’t say for certain" caveat into the lead sentence. It did the same for a May 8 story when the tally had grown to 67.

And a fact-check published by both PolitiFact Wisconsin and USA TODAY rated False a claim from a little-known news outlet that there had been a "surge" in COVID-19 cases in Wisconsin after the election. Here’s what that fact check said about the sloppily-reported claim from SecondNexus.com:

Both the article and the tweet it was based on were removed after that fact-check published.

We won’t bother to dive deeper into Wheeler’s "pretended" claim. That adds another layer of absurdity since it implies some kind of intentional coverup or falsehood, when there’s no proof the coverage was wrong in the first place.

The One America News Network claimed in a video posted to Facebook that "mainstream media pretended there was a deadly surge in COVID cases thanks to Wisconsinites voting."

We didn’t find a single traditional or "mainstream" news outlet that characterized the election-related cases as a surge or anything close to that — much less anything that would support this kind of sweeping generalization.

The reports prominently noted the caveat that officials can’t say for certain that the election caused the cases we are aware of, and they had made no exaggerated claims about how large those numbers were. (And, to be clear, the 71 cases certainly don’t constitute a surge.)

So Wheeler is flat wrong in both her claim about coverage and the related implication from the use of "pretended" that something was reported wrong intentionally.

Wisconsin State Journal, 67 got COVID-19 after visiting polls in state's April 7 election but tie to voting unclear, May 8, 2020

PolitiFact Wisconsin, No proof (yet) of a post-election "surge" in Wisconsin coronavirus cases, April 17, 2020