• Giuliani’s source was an affidavit that mistook Minnesota precincts for Michigan precincts and cited 25 “Wayne County” precincts that are not actually in Wayne County.

• Beyond being misidentified, the data in the affidavit is not consistent with official data from the Minnesota secretary of state’s office.

• When we inquired, a Trump campaign lawyer called the numbers in the affidavit “a simple mistake.”

Giuliani’s source for these percentages was an affidavit authored by Russell Ramsland, a security consultant and former Republican congressional candidate. The document alleges that anomalies in the vote count indicate that Michigan election results were "manipulated."

"There were at least 19 precincts where the Presidential Votes Cast compared to the Estimated Voters based on Reported Statistics exceeded 100%," the affidavit reads. The document then goes on to list the 19 precincts, shown in this screenshot:

But there’s a problem, and it’s a big one: All 19 of the precincts cited in the affidavit are actually located in Minnesota, not Michigan.

A separate part of the affidavit focuses on Wayne County, Mich., which includes Detroit. Of 47 Wayne County precincts, the document lists 25 that allegedly showed 100% turnout. Here’s that portion of the document:

This portion of the document isn’t accurate either: None of the 25 precincts listed are actually in Wayne County. Like the 19 precincts cited above, each is located in Minnesota.

Powerline, a conservative blog, was the first to report that the affidavit cited Minnesota rather than Michigan voting jurisdictions. (A possible explanation is Michigan’s postal abbreviation is MI, while Minnesota’s is MN.) Other media outlets confirmed these discrepancies. 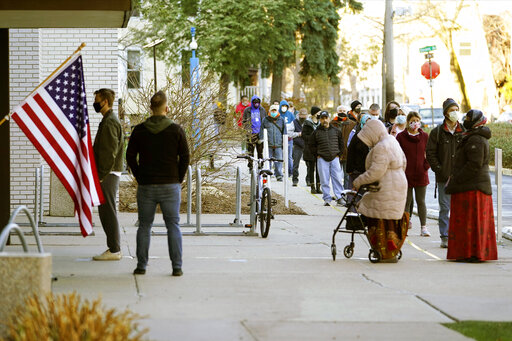 Voters wait to cast their votes on Nov. 3, 2020, at the Minneapolis College of Art and Design. (AP)

When we checked data from the office of the Minnesota secretary of state, we found no support for the affidavit’s conclusions. In the five townships cited as having the largest number of over-votes, the number of votes on election day was smaller than the number of registered voters.

For example, the affidavit cites Minnesota’s Benville Township as having 350% voter turnout, which would be by far the largest over-voting rate alleged in the document. Both Giuliani and Trump lawyer Sidney Powell cited the 350% figure in the Nov. 19 press conference.

However, according to the Minnesota Secretary of State’s election data, 63 people voted in the township, and 71 were registered to vote, a turnout rate of 89%.

The Washington Post, which cross-checked numbers from the five precincts alleged to have the highest number of over-votes, found that the Ramsland affidavit overestimated the numbers in all five precincts.

Risikat Adesaogun, a spokesperson for the Minnesota Secretary of State’s office, told PolitiFact that "we have canvassed at the county level, and we don’t have any clarity about the contents of the affidavit and the source of the alleged data."

Even if the data in the affidavit were accurate, it would do little to further the Trump campaign’s baseless argument that massive voter fraud swung the election to Biden. For instance, election data from the Minnesota secretary of state’s office shows that Benville Township voted overwhelmingly for Trump, not Biden.

It’s unclear what data Ramsland used to arrive at his percentages. We reached out to him but haven’t heard back.

L. Lin Wood, another Trump campaign lawyer, has filed the affidavit as part of a lawsuit in Georgia. When reached by email, Wood called the labeling of the numbers as being from Michigan rather than Minnesota a "simple mistake" and said the document "will be corrected if it hasn’t been already."

"We are imperfect," he told PolitiFact.

The numbers come from an affidavit filed by lawyers working for Trump, but the jurisdictions cited are in Minnesota, not Michigan. Furthermore, the Minnesota data cited in the affidavit do not square with actual data from the Minnesota Secretary of State’s office. The official data shows no over-voting.

A Trump campaign lawyer acknowledged a "simple mistake" and said the document would be "corrected."

Clara Hendrickson contributed to this report.

Office of the Minnesota Secretary of State, Voting Precincts

Office of the Michigan Secretary of State, Candidate listings and election results by county

Office of the Minnesota Secretary of State, Results for selected precincts in Beltrami County, Nov. 12, 2020