President Donald Trump holds a news conference on the North Portico of the White House on Sept. 7, 2020. (AP)

• There was a major decline in the case-fatality rate — the number of coronavirus deaths divided by known cases — compared to an earlier phase in the epidemic. However, “groundbreaking therapies” are only part of the reason.

• One factor in a lower case-fatality rate is the huge increase in coronavirus testing. In the first weeks and months of the outbreak, testing focused on those who were more seriously ill, including nursing home residents. That kept the case-fatality rate high.

• By the time Operation Warp Speed had announced its scope and leadership, most of the decline in the case-fatality rate had already occurred.

Seeking to counter the notion that the United States has failed to make progress against the  novel coronavirus, President Donald Trump offered a positive statistic during a Sep. 7 news conference.

"Under Operation Warp Speed, we’ve pioneered groundbreaking therapies, reducing the fatality rate 85 percent since April," Trump said. "You don’t hear that from the press very often.  They don’t like to talk about that. So the fatality rate, 85% — think of that — since April."

When we asked the White House for supporting evidence, they provided the following chart, which they said was compiled by Stanford University School of Medicine professor Jay Bhattacharya. The time frame is somewhat different from what Trump cited, but the trend line is roughly the same. 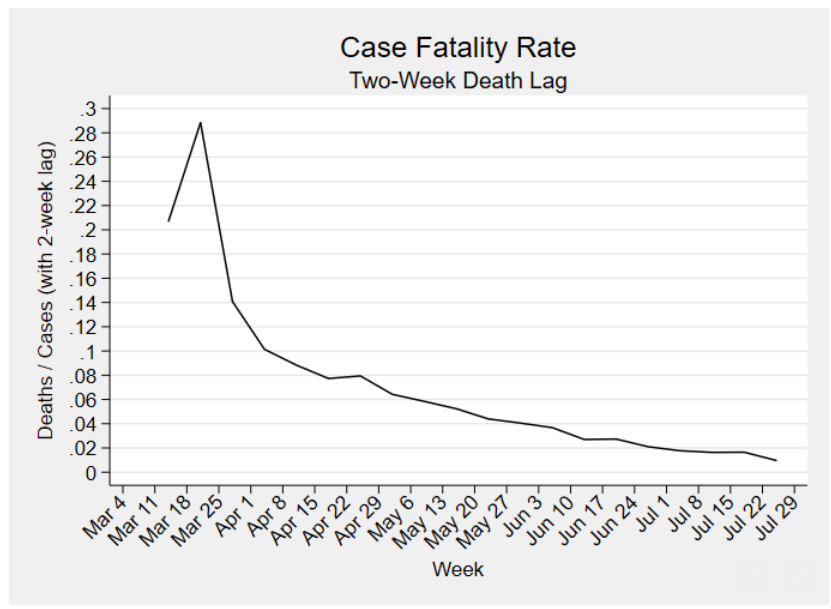 The chart shows the case-fatality rate for coronavirus between mid-March and mid-July. That statistic refers to the number of coronavirus deaths divided by the number of known coronavirus cases — effectively, the likelihood that you will die from coronavirus if you are known to have been infected. (The data adjusts for the typical lag time between infection and death by pairing the infection data with the death data from two weeks later.)

According to the White House’s chart, close to one-third of people who were infected in mid-March ended up dying from the virus. By late April, that rate had fallen to 5%. That’s roughly an 85% decline. (The statistic does not take into account specific risk factors for the disease that an individual may have, and instead looks at the population as a whole. So a person with risk factors may have a greater likelihood of dying, while one without risk factors would have a smaller likelihood.)

Bhattacharya told PolitiFact that the chart shows "a very sharp drop in the case fatality rate from COVID-19 infection in the U.S. since the beginning of the epidemic — people are more likely to survive after infection than they were. It seems very important to me for the public to understand that the lethality of the infection is not what it was when impressions first formed in March. The experience of the Northeast with the epidemic in those early days is atypical of the experience of people infected now."

However, Trump’s focus on this one data point also needs some additional context. The reasons for the drop are not entirely from improved therapies, and Operation Warp Speed, the administration’s effort to devise countermeasures against the virus, doesn’t necessarily get the credit for the drop.

Why did the case fatality rate fall?

Part of the decline likely stems from reasons other than better treatments, said Tara C. Smith, a professor of Epidemiology at Kent State University’s College of Public Health.

One factor is testing. Early on, due in part to shortages in testing equipment, only individuals with significant symptoms were being tested, and those patients would be likelier to end up with a fatal case. Later on, Smith said, testing was catching more individuals with mild symptoms or even no symptoms at all, which helped decrease the case-fatality rate.

"Since the denominator of case-fatality is the number of cases detected, the availability of testing and testing practices is a huge driver of the case fatality," said Brooke Nichols, an infectious disease mathematical modeler at the Boston University School of Public Health.

It is worth noting that the Trump administration has touted its role in expanded testing. But had the same level of testing been in place earlier in the epidemic, the figures on this chart may not have shown the same level of fatality rate decline.

In addition, the coronavirus was especially deadly to residents in nursing homes early in the pandemic. That coincided with the period of when testing was limited, probably exaggerating the case-fatality rate. Later in the pandemic, nursing homes implemented stronger protections.

Better treatments have helped as well, experts said, including improvements from trial and error in how to treat hospitalized patients, and from additional knowledge gained about what had been an entirely unknown virus just months earlier. The White House told PolitiFact that it considers such improvements the key to the U.S. having a better case-fatality ratio than some other countries, such as the United Kingdom, Italy, and France.

Sometimes these improvements have stemmed from things like ventilator use or better positioning of patients on their hospital bed.

In other cases, they have come from the use of drugs, such as an existing steroid known as dexamethasone and experimental drugs such as remdesivir, Bhattacharya said. "Teasing apart exactly how much each treatment advance has mattered is still the subject of scientific work," he said.

Smith said she expects pharmaceutical advances to eventually be shown to be "a much smaller piece of the pie" than the other factors, such as the scope of testing and the age range of those likely to be tested.

Meanwhile, it’s doubtful that Operation Warp Speed played much of a role in the decline Trump was referencing. The administration-designed effort, run by the Department of Health and Human Services, does focus to an extent on therapeutics, but its primary goal is to deliver 300 million doses of a safe and effective vaccine by January 2021.

More to the point, Operation Warp Speed only announced its scope and leadership on May 15, and by that time, the case-fatality rate had already fallen most of the way from its peak.

Finally, it’s worth noting that case-fatality rate is not the only relevant statistic — and many of the other ones are less flattering to the administration.

Here’s a chart comparing the decline of the case-fatality rate against daily deaths from coronavirus. (The data we used, from the COVID Tracking Project, was different than what was used in the White House chart, but it shows the same overall pattern.)

As the chart shows, having a low case-fatality rate is no guarantee of protection against a surge in deaths. Even though the case fatality rate has been lower than ever in recent weeks, deaths have settled into roughly 1,000 a day, far more daily deaths than when the case-fatality rate was much higher.

The decline in the case-fatality rate from an earlier phase in the epidemic is real and notable, but "groundbreaking therapies" are only part of the reason.

When the rate was peaking, it was a period when relatively few Americans were being tested, and when a sizable percentage of those being tested were those who were more seriously ill, including nursing home residents.

In the meantime, by the time Operation Warp Speed had announced its scope and leadership, most of the decline in the case-fatality rate had already occurred.