Facebook posts
stated on September 23, 2020 in a Facebook post:
Says President Trump tweeted that it’s “not fair for a president to leave office because of BAD votes!” and that the Supreme Court “should decide the presidency at every election.”

Did President Donald Trump really tweet that it’s not fair for a president to have to leave office over "bad votes," and that the Supreme Court should be able to pick the president, instead?

"Not fair for a president to leave office because of BAD votes!," the purported Sept. 23 tweet, timestamped reads. "The Supreme Court should decide the presidency at every election. And the president should always be president because that’s what the American people want! #yourpresident." 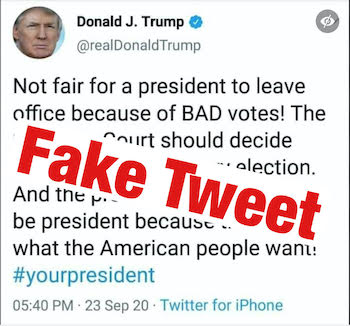 The post was flagged as part of Facebook’s efforts to combat potential false news and misinformation on its News Feed. (Read more about our partnership with Facebook.)

Trump declined to commit to a peaceful transfer of power — on the same day that the tweet was generated — should he lose the presidential election, but there’s no evidence that the tweet is real.

Viral image
stated on October 12, 2020 in a Facebook post
A fly landed on Amy Coney Barrett’s shoulder during day one of the confirmation hearings

ProPublica, a nonprofit journalism organization, maintains a database of tweets deleted by politicians called Politwoops. The alleged post is not captured in the database, and we found no evidence that shows the tweet ever existed on the platform.

If Trump had actually posted this, it would have prompted widespread news coverage and criticism from his opponents. But there’s none — because he didn’t.

There is no record of Trump ever tweeting the statement.

Facebook posts
stated on October 22, 2020 a Facebook post:
"World renowned experts" declare that we should “live normally, practice simple hygiene,” stay home when sick and use protective measures only with “the most vulnerable populations.”

Donald Trump
stated on October 22, 2020 the final presidential debate:
“When I closed (travel from China) he said I should not have closed. ...He said this is a terrible thing, you are a xenophobe, I think he called me racist. Now he says I should have closed it earlier.”

John Cornyn
stated on October 14, 2020 a tweet:
Says Democratic senators were missing “masks” as they huddled close together at the Judiciary Committee hearing for Amy Coney Barrett.

Donald Trump
stated on October 8, 2020 an interview with Fox News:
The Commission on Presidential Debates wrote a letter after the 2016 presidential debates apologizing to Donald Trump.