Facebook posts
stated on April 3, 2021 in a Facebook post:
“Pete Buttigieg’s dog and pony show. He gets out of [the] car to ride his bike a few feet, pretending to save energy.”

U.S. Transportation Secretary Pete Buttigieg has been a longtime proponent of making bicycling more accessible. During his time as mayor of South Bend, Ind., the League of American Bicyclists recognized the city for its efforts to become more bike and environmentally friendly.

But now, social media users are accusing Buttigieg of faking a bike ride near the White House.

"Pete Buttigieg’s dog and pony show. He gets out of [the] car to ride his bike a few feet, pretending to save energy," read the text on a now-removed video shared by conservative commentator Ryan Fournier, who described the action as dishonest in a caption that accompanied the post before it was removed from public view.

The post, which we also found being shared elsewhere with similar claims calling Buttiegieg’s ride fake and staged, was flagged as part of Facebook’s efforts to combat false news and misinformation on its News Feed. (Read more about our partnership with Facebook.) 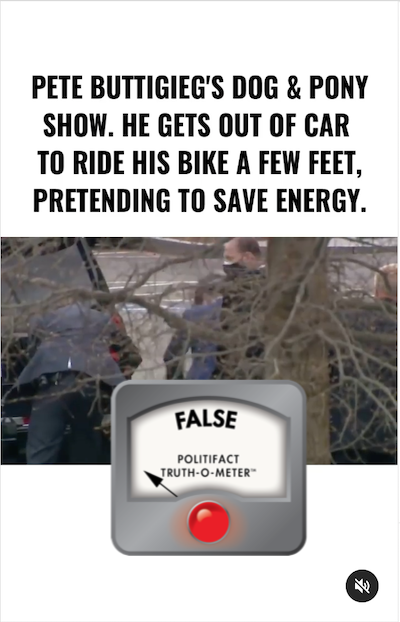 (Screengrab from Instagram)
The video shows Buttigieg behind an SUV as he mounts his bike and begins riding, with a security detail following in the SUV and by bike. A voice can be heard narrating the scene, saying, "Getting on a bike in his suit, riding away. I didn’t know he’d ride in a suit."
The video was originally captured and tweeted by journalist Donald Judd of CNN on April 1, the day President Biden held his first in-person Cabinet meeting at the White House. "Transportation Secretary Pete Buttigieg biked to the White House for today's Cabinet Meeting, it would appear," Judd wrote on Twitter at 4:07 p.m. Eastern time, apparently after the roughly two-hour Cabinet meeting had ended.
The video was retweeted thousands of times by people who believed it showed Buttigieg staging a bike ride, including Kellyanne Conway, counselor to former President Donald Trump.
We reached out to Buttigieg’s office at the Department of Transportation but didn’t hear back. However, an agency spokesperson told Snopes and Lead Stories that the clip shows part of what was a round trip for Buttigieg. "He rode his bike to the White House Cabinet meeting and he rode his bike back to DOT after the meeting," the spokesperson was quoted by Snopes as saying.
The ride from the White House to DOT headquarters is more than 3 miles one-way — roughly 20 minutes by bike, according to Google Maps.
Judd didn’t respond to our questions about the video. But we noted that he did retweet the Snopes report disputing the claim that the ride was staged.
Another journalist, Katie Barlow, tweeted her own video in response to Judd, saying that it showed that Buttigieg also "biked out of the complex." A little later, she tweeted the same video again on her own feed, writing, "Not your every day DC sighting of the Secretary of Transportation biking out of a cabinet meeting, @PeteButtigieg."
This isn’t the first time Buttigieg has garnered social media attention for traveling the nation’s capital on two wheels. When he was spotted using Metro DC’s bike share program in February, fans and detractors weighed in with praise and critiques.
Our ruling

A Facebook video post claims that Buttigieg got out of a car "to ride his bike a few feet,  pretending to save energy."

A spokesperson for the Transportation Department said Buttigieg used the bike for a round-trip journey between agency headquarters and the White House, which is more than 6 miles. The vehicle seen in the video was part of his security detail.

Snopes, Did Pete Buttigieg stage a bike ride after riding in SUV, April 3, 2021

Bloggers
stated on February 21, 2022 in a blog post:
Joe Biden was holding a medical device in a photo he tweeted during the 2022 Winter Olympics.