Joe Biden
stated on April 7, 2021 in remarks at the White House:
“A new, independent study put out last week found that at least 55 of our largest corporations used various loopholes to pay zero federal income tax in 2020.”

A FedEx truck in Olive Branch, Miss. on Dec. 20, 2020. FedEx was one of 55 companies cited in a recent report as having paid no federal income taxes. (AP)

• A study was released days earlier by a non-governmental group that concluded that at least 55 large companies paid zero federal income taxes in 2020.

• However, Biden’s term “loopholes” may not be apt, since many of the relevant provisions are deliberate attempts to set incentives through the tax code and may be broadly popular.

• Some critics say the financial disclosures used to compile the report are imperfect estimates of what these companies actually paid in taxes, since the accounting rules are different for the two types of filings.

With Republicans criticizing the corporate tax hike proposed by President Joe Biden to fund his infrastructure plan, Biden pushed back during remarks on his proposal, the American Jobs Plan.

Biden framed the issue as one of fairness, with big corporations not paying their fair share.

"A new, independent study put out last week found that at least 55 of our largest corporations use the various loopholes to pay zero federal income tax in 2020," Biden said in his April 7 remarks. "It's just not fair. It's not fair to the rest of the American taxpayers."

We found that Biden’s statement is supported by a recently released study from a liberal group, though that study’s methodology has its critics. 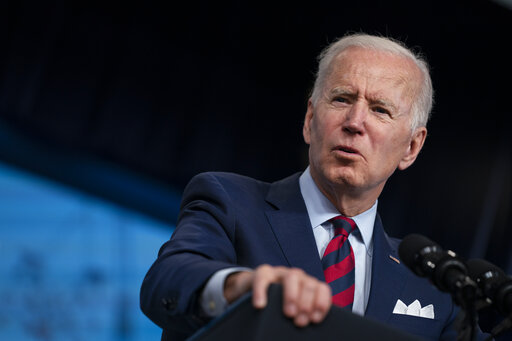 President Joe Biden speaks during an event on the American Jobs Plan at the White House on April 7, 2021. (AP)

What the report said

We didn’t hear back from the White House, but Biden’s remarks make clear that he was referring to an April 2 study by the liberal-leaning Institute on Taxation and Economic Policy. That study, which had received wide media coverage in recent days, found that "at least 55 of the largest corporations in America paid no federal corporate income taxes in their most recent fiscal year despite enjoying substantial pretax profits in the United States."

The list of 55 companies is sprinkled with well-known names, including FedEx, HP, Nike, Salesforce and XCel Energy.

Collectively, the study concluded, the companies earned $40.5 billion in pretax income in 2020 and would have paid taxes amounting to $8.5 billion had this income been taxed by at the standard 21% corporate rate. In reality, the companies collectively received rebates from the federal government worth $3.5 billion.

The study cited several tax laws that helped protect these companies’ income from taxation, including those governing the tax treatment of executive stock options, research and experimentation, renewable energy, deductions for capital expenses, and the reallocation of losses to different tax years.

Some observers told PolitiFact that they took issue with Biden’s characterization of such laws as "loopholes." Reasonable people can disagree over the wisdom of a given tax provision, but they were "deliberate policy choices, not rifle shots," said Douglas Holtz-Eakin, president of the center-right American Action Forum.

"The problem with that framing is that many of the provisions reducing tax rates are either built into the code to properly calculate net income — such as a 100% bonus depreciation, a pro-growth provision — or provisions created to incentivize preferred activity by policymakers, such as the research and experimentation tax credit," Watson said.

Still, even experts who are critical of the study’s methodology told PolitiFact that Biden accurately portrayed the gist of the report’s findings in his April 7 remarks. Notably, Biden’s remark also stopped short of blaming the companies for evading taxes; his remarks suggest that his quarrel is with the tax system that allowed the companies to legally pay so little in taxes.

The group’s study is based on an analysis of annual financial reports filed by publicly traded companies in the Standard & Poor’s 500 stock index or the Fortune 500 list of companies with the largest revenue.

Facebook posts
stated on January 6, 2023 in a video shared on Facebook
“Americans who worked through the pandemic are being paid up to $26,000 by qualifying for the Employee Retention Credit.”

But while this data comes from federally required disclosures, critics say that what is disclosed on these forms is calculated differently from these companies’ actual tax filings, which are private. In other words, the critics say, we don’t really know whether these companies paid zero in taxes or not.

Holtz-Eakin wrote that using Securities and Exchange Commission filings, as the study does, is "tricky," because the way income is counted on these forms "departs substantially" from the way taxable income is reported to the Internal Revenue Service.

Notably, companies have some flexibility to determine their own fiscal years for financial disclosures, whereas the IRS requires a more rigid schedule for tax payments, he wrote. "Financial reports may not cover the same period of time as a tax return," he wrote.

Meanwhile, the tax code allows companies to "smooth out income by allowing losses to be carried forward or backward for a number of years," Holtz-Eakin wrote. As a result, "a snapshot of the company in its single year of profitability is a necessarily distorted view, but one that some tax critics tend to highlight."

In addition, the rules governing the reporting of capital investments in the SEC disclosures may be different from what the IRS allows.

Steve Wamhoff, director of federal policy at the Institute on Taxation and Economic Policy, said he disagrees with the methodological critiques.

Wamhoff said his group’s report focuses on what the companies affirm is their best calculation of taxes they have paid for the year. "It’s very unlikely that the company’s real-world income tax liability will be substantially different from this," he told PolitiFact.

He added that the reallocation of losses to different tax years is reasonable in theory, "but we are finding that corporations are not paying taxes over a longer period. Our report finds that many of these companies — 26 that we have identified — paid nothing over a three-year period.

William Gale, a senior fellow at the Brookings Institution, agreed that it can be difficult to infer a company’s actual tax position from its SEC filings. But he said the idea that many large corporations do pay zero in federal taxes is "by now well-established."

"The non-partisan Congressional Joint Committee on Taxation has shown that in any given year for the past 15 years or so, about two-thirds of corporations with less than $1 billion in assets paid no federal corporate income tax, and one-third of corporations with assets greater than $1 billion paid no federal corporate income tax," Gale said. And the committee, he said, "has access to corporations’ actual tax returns."

Biden is right that a study had been released days earlier by a non-governmental group that concluded that at least 55 large companies paid zero federal income taxes in 2020.

However, it may be incorrect to call the tax provisions cited in the report "loopholes," since many of them are deliberate attempts by the government to set incentives through the tax code and may on their own be broadly popular.

Critics also say that the financial disclosures used to compile the report are imperfect estimates of what the companies actually paid in taxes, since the accounting rules are different for the two types of filings. On the other hand, separate data from the Joint Committee on Taxation, which is based on actual tax returns, has supported the study’s general point.

Email interview with Steve Wamhoff, director of federal policy at the Institute on Taxation and Economic Policy, April 7, 2021