Facebook posts
stated on January 6, 2021 in a Facebook post:
Quotes show Democrats supported riots “when BLM was BURNING down cities and killing people in the streets!”

After pro-Trump rioters stormed the U.S. Capitol on Jan. 6, some have taken to social media to criticize liberals who have condemned the breach, calling them hypocrites for supporting the Black Lives Matter protests over the summer.

Each photo includes a quote purportedly from the lawmaker that sounds like she is encouraging unrest. The post claims these are "direct quotes" from when Black Lives Matter "was BURNING down cities and killing people in the streets!" 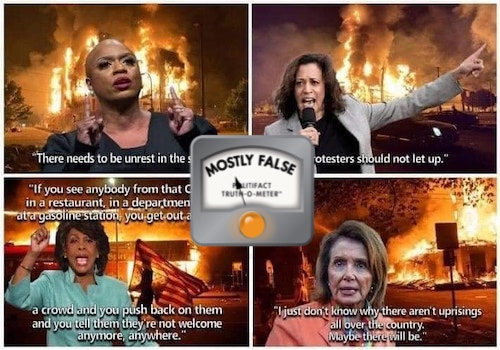 The message isn’t totally accurate. Some of the quotes are legitimate, but some are outdated and unrelated to the Black Lives Matter protests, and others are taken out of context.

Let’s take it one quote at a time.

According to the post, Pressley, D-Mass., said of the Black Lives Matter protests that "there needs to be unrest in the streets."

Pressley did call for "unrest in the streets" in an Aug. 15 interview with Tiffany Cross on MSNBC’s "AM Joy" show.

"This is as much about public outcry and organizing and mobilizing and applying pressure so that this GOP-led Senate and these governors that continue to carry water for this administration, putting the American people in harm’s way, turning a deaf ear to the needs of our families and our communities — hold them accountable," she said.

"Make the phone calls, send the emails, show up," she added. "You know, there needs to be unrest in the streets for as long as there’s unrest in our lives."

"There are moments in real time when you’re offering something — on a stage in a dais, in an interview — where you become aware: ‘I’m going to experience a lot of vitriol for this,’" Pressley recalled about her comment in a Jan. 3 USA Today article. "I have to say, for this particular moment, I had not anticipated that, because it was a framing that I have used many times before."

There was no indication Pressley necessarily meant anything other than peaceful protest.

The quote attributed to Harris, that "protesters should not let up," is legitimate, but she was neither referring to riots nor condoning people burning down buildings.

Speaking remotely to late-show host Stephen Colbert in June 2020, Harris voiced support for the racial justice protests that were going on — but she didn’t say she wanted riots to continue.

In a speech on Aug. 27, Harris said she supported peaceful protesters.

"We should not confuse them with those looting and committing acts of violence," she said.

Rep. Maxine Waters, D-Calif., is quoted as saying: "If you see anybody from that Cabinet in a restaurant, in a department store, at a gasoline station, you get out and create a crowd and you push back on them, and you tell them they’re not welcome anymore, anywhere."

Waters’ comment came in 2018 at a Los Angeles rally after a Virginia restaurant owner refused to serve then-White House press secretary Sarah Huckabee Sanders. It had nothing to do with the Black Lives Matter movement or riots.

Waters urged attendees at the event to keep "pushing back" against members of the Trump administration with whom they disagreed.

"You think we’re rallying now? You ain’t seen nothing yet," Waters said, according to a HuffPost report. "Already you have members of your Cabinet that are being booed out of restaurants ... protesters taking up at their house saying ‘no peace, no sleep.’"

"If you see anybody from that Cabinet in a restaurant, in a department store, at a gasoline station, you get out and you create a crowd and you push back on them and you tell them they’re not welcome anymore, anywhere," she added.

Her comment was met with condemnation from Republicans and distance from some Democrats.

Pelosi’s alleged riot quote — "I just don’t know why there aren’t uprisings all over the country. Maybe there will be" — was said over two years ago about the Trump administration’s policy of separating migrant children from their parents at the U.S.-Mexico border.

On June 14, 2018, Pelosi said that the National Association of Evangelicals told Congress that the U.S. refugee resettlement system was the "crown jewel of American humanitarianism."

"And in order to do away with that crown jewel, they're doing away with children being with their moms," she said. "I just don't even know why there aren't uprisings all over the country. And maybe there will be, when people realize that this is a policy that they defend."

A Facebook post features statements made by four Democratic leaders and claims the comments are all direct quotes that were made "when BLM was BURNING down cities and killing people in the streets!"

This is misleading. Some of the quotes are legitimate, and were made during or around the height of the Black Lives Matter protests over the summer.

Some of the statements received backlash, but none specifically indicated that they meant anything besides peaceful protest. Harris, in particular, condemned violent rioters and said she supported peaceful protesters.

Other comments were made years ago and were not referring to any looting or violent civil unrest that occurred during riots in 2020.

Real Clear Politics, Pelosi: "I Don't Even Know Why There Aren't Uprisings All Over The Country" Over Migrant Child Separation, June 14, 2018