Facebook posts
stated on July 6, 2021 in an Instagram post:
A study found an “82% miscarriage rate” among women between 30 days and 20 weeks pregnant who got an mRNA COVID-19 vaccine.

The findings of a preliminary paper that evaluated how pregnant women were faring months after receiving an mRNA COVID-19 vaccine are being misrepresented online.

Alarming posts, like one shared on Instagram on July 6, state that 82% of women who got vaccinated early in their pregnancies experienced a miscarriage.

"82% miscarriage rate among women who got the juice between 30 days and 20 weeks pregnant," its caption says. "Don’t tell me ‘that’s not what the study says’ if you only read the abstract. Read all of it. Do some math. Draw your own conclusions from this, but share the info. Don’t tell me you did the math until you took out the 700 people out who got their first dose in the 3rd trimester." 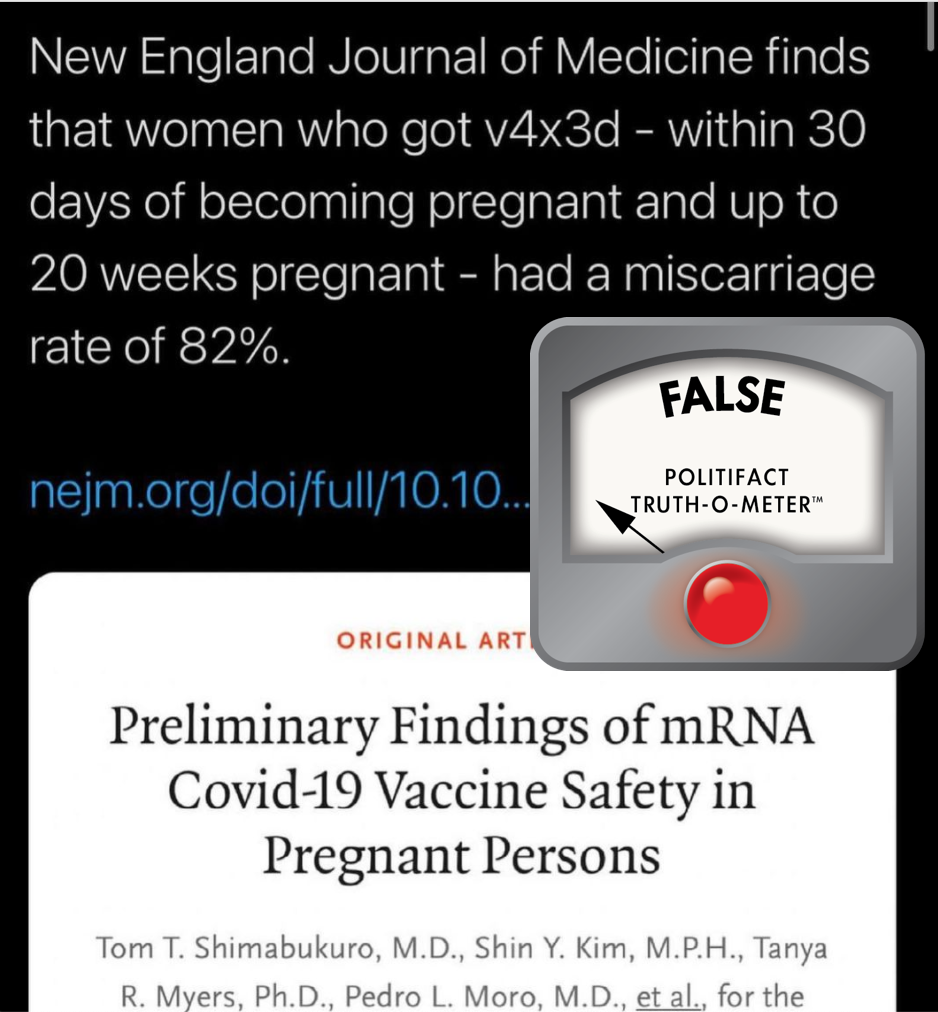 This result is skewed because it doesn’t account for all the pregnancies being evaluated in the study, just ones that were considered completed at the time. The majority of participants are either still pregnant, or have not yet had follow-ups with the paper’s authors.

While the preliminary results found no increased risk of miscarriage associated with COVID-19 vaccination, there is still a data deficit. Researchers acknowledge that available data on the topic remains limited and requires further research.

What the study says

The paper, titled "Preliminary Findings of mRNA Covid-19 Vaccine Safety in Pregnant Persons,"  was published by the New England Journal of Medicine on June 17. It was conducted by the Centers for Disease Control and Prevention’s v-safe COVID-19 Pregnancy Registry Team.

Researchers contacted 3,958 women, who had enrolled in the pregnancy registry, about three months after their vaccination.

They found that 712 had given birth to healthy babies, 104 experienced miscarriages and one case resulted in a stillbirth. Induced abortion and ectopic pregnancy happened in 10 cases. The rest of the participants — over 3,100 — were either still pregnant or had not yet completed follow-ups with the authors.

The 12.6% miscarriage rate only reflects the completed pregnancies the authors knew about at the time of the paper’s publication.

The catch, the claim’s proponents say, is that 700 of those 827 pregnant women received the vaccine when they were already in their third trimester, a point in pregnancy when fetuses are far more developed and miscarriage is less common. So, they changed the denominator by excluding those 700 to calculate a new miscarriage rate of about 82%. Other social media posts have put it as high as 84%.

Victoria Male, a professor in reproductive immunology at Imperial College in London, called the 84% "meaningless."

"The quoted rate of 84% is not the miscarriage rate," Male said in a series of tweets. "It just tells us that we can't go from the first trimester to giving birth to a healthy baby in three months. Which I think we all knew, right?"

This @NEJM paper on the safety of #COVID19 #vaccines during #pregnancy found no increased risk of miscarriage associated with vaccination.

So why is this person claiming that there was an 83% rate of miscarriage?

The CDC’s Immunization Safety Office told PolitiFact that the paper was an initial analysis of the v-safe pregnancy registry data, and said the department debated the best way to present the number of miscarriages, which it describes as "spontaneous abortions."

"We felt it was important to report all spontaneous abortions that had been observed in the registry thus far. At the same time, we also wanted to limit the analysis to pregnancies for which we had final outcome data as there may be completed pregnancies we are not yet aware of because they have not had a scheduled follow-up call," the CDC said.

In future reports, the CDC plans to limit its study to women who were vaccinated less than 20 weeks into their pregnancies and once their estimated delivery dates have passed.

In analyzing limited data for women who received a vaccine up to 20 weeks into their pregnancies, the CDC found 27 miscarriages among 1,364 women, a rate of about 2%. But this is likely an underestimate because scientists don’t yet know whether all the remaining pregnancies were still ongoing.

An Instagram post claims that a scientific paper found an 82% miscarriage rate among women who got an mRNA COVID-19 vaccine between 30 days and 20 weeks pregnant.

The post makes a conclusion based on a small sample of completed pregnancies known by researchers. The majority of study participants are either still pregnant, or have not yet had follow-ups with the paper’s authors.

Early results have not found an increased risk of miscarriage associated with COVID-19 vaccination. But until more authoritative data is released, any statistic on this topic should be considered preliminary.