Social media users are circulating an image that purportedly shows faith leaders surrounding and praying over a gold-painted statue of former President Donald Trump that appeared at the 2021 Conservative Political Action Conference. 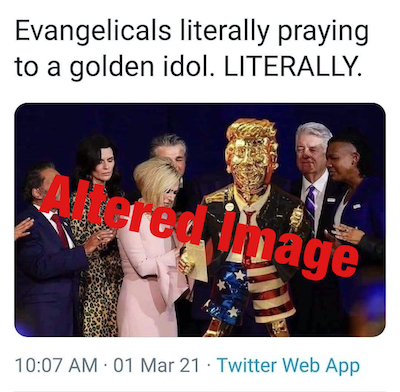 "Evangelicals literally praying to a golden idol. LITERALLY," one post said, alluding  to the golden calf idol in the Bible’s Old Testament.

"Caption this photo taken today of CPAC’s evangelical leaders. Yes, they are praying to a golden statue of their holy insurrectionist," another reads.

But the image is altered, and the photo it’s based on wasn’t taken in 2021.

We conducted a reverse-image search, which showed that the original photo depicted Trump meeting with a group of evangelical leaders. In the doctored version, the gold-painted statue was edited in to replace Trump.

The authentic photograph was taken by photographer Marco Bello at an "Evangelicals for Trump" launch event at the King Jesus International Ministry in Miami on Jan. 3, 2020.

News organizations such as the New York Times and NBC shared images and video of the moment.

These posts are False.

Check Your Fact, FACT CHECK: DOES THIS IMAGE SHOW PEOPLE PRAYING OVER A GOLDEN STATUE OF DONALD TRUMP?, March 1, 2021