Facebook posts
stated on May 22, 2021 in a Facebook post:
Lumber, gas, wheat, coal and corn cost more in April 2021 "in Joe Biden's America" than they did a year earlier.

An image widely shared on Facebook blames President Joe Biden for how much more five commodities cost in April 2021 versus a year earlier.

But it ignores the fact that in April 2020, the COVID-19 pandemic all but shut down the economy and depressed prices across the board.

"How much more does it cost to live in Joe Biden’s America?" is the headline of the image. Then the image lists what it says are the prices in April 2020 vs April 2021, Biden’s third month as president, attributing the figures to Markets Insider:

One Facebook user who shared the image added this in a post: "No explanation needed… ruining America 2.0…." 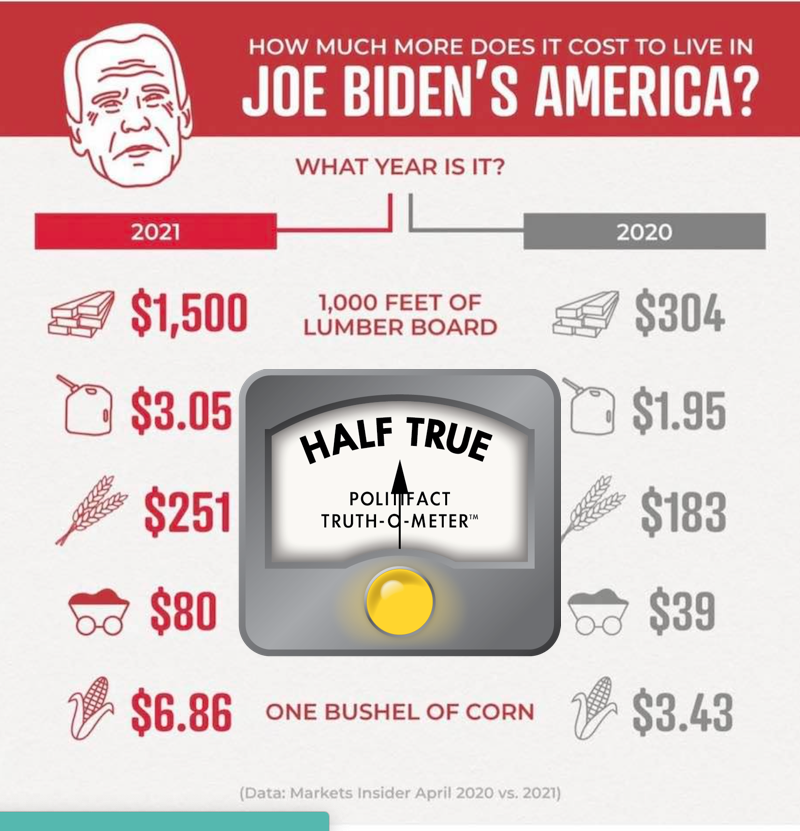 (Screengrab from Facebook)
The post was flagged as part of Facebook’s efforts to combat false news and misinformation on its News Feed. (Read more about our partnership with Facebook.)
Yes, Biden’s time in office has coincided with a rise in commodities prices. It has also coincided with the recovery of consumer demand, a decline in COVID-19 cases and an increase in COVID-19 vaccination rates.
How much prices are up

Lumber: In a previous article, we found that depending on the type, the cost of plywood had risen dramatically. In the South, for example, the price of a 23/32-inch panel was $455 per thousand square feet in the first week of April 2020 and $1,500 a year later. Similarly, Markets Insider shows lumber overall was roughly five times more expensive in April 2021 than a year earlier.

Key reason: Recovery from the pandemic

We examined the threat of inflation in an article in mid-May.

Economists said that most of the current rise in consumer prices stems from supply chains having to adjust quickly to greater economic activity after increased vaccination has eased the pandemic. Recent price trends for some basic commodities illustrate the ripple effect of the widespread business shutdowns that hit just a little over a year ago, and the resurgence of demand as vaccinations and declining COVID-19 case numbers promise a return to normal business activity.

For example, in the case of gasoline, experts said, tight supplies drove prices up from January, when Biden took office, to April (before a May hacker attack shut down a key pipeline). In general, a president has limited control over the weekly and monthly shifts in gasoline prices.

And for plywood, mills that shut down or reduced production during the throes of the pandemic in 2020 still haven’t caught up to increased demand.

All in all, the peculiar transition to a post-pandemic economy has produced mismatches in supply and demand that are now driving the sharpest inflation. Economists expect these price increases to reverse once supply chains iron out delays and shortages.

The only Biden policy that has affected prices is the $1.9 trillion COVID-19 relief bill he signed March 11, said Abdur Chowdhury, an emeritus economics professor at Marquette University in Milwaukee. "Consumers have ample cash in hand. As the economy reopens, consumer spending on leisure, travel, entertainment and other service-related activities will increase," he said.

Blaming Biden for the inflation "seems an exaggeration at best," said Jeffrey Miron, a senior lecturer in economics at Harvard University and  director of economics studies at the libertarian Cato Institute. "It likely reflects recovery from the recession/pandemic, concerns about monetary policy being too accommodating, as well as concerns that fiscal stimuli, including several adopted pre-Biden, are increasing aggregate demand and pushing up prices."

The specific price increases claimed are roughly accurate, but they compared April 2020, when the COVID-19 pandemic had all but shut down the economy and driven down prices, with April 2021, as the nation’s recovery from the pandemic was in swing.

Economists say that post-pandemic mismatches in supply and demand are to blame for higher prices in April 2021. While presidents often get blamed for inflation, in this case the sharp contrast in prices from a year earlier is due mainly to the economy having hit a low in April 2020.

For a statement that is partially accurate but leaves out important details, our rating is Half True.

Email, Jeffrey Miron, senior lecturer in the Department of Economics at Harvard University, director of economics studies at Cato Institute, May 27, 2021