Facebook posts
stated on October 5, 2021 in social media posts:
“In case you forgot. Two years ago today, we were experiencing the greatest economy in the history of the world.”

• Unemployment was near historical lows under President Donald Trump.

• However, growth in gross domestic product was well below what previous presidents achieved, and other metrics such as wages and business investment ranged from decent to mediocre.

Fans of former President Donald Trump have been sharing a post on social media that pines for the economy during his tenure.

The text-only post says, "In case you forgot. Two years ago today, we were experiencing the greatest economy in the history of the world." 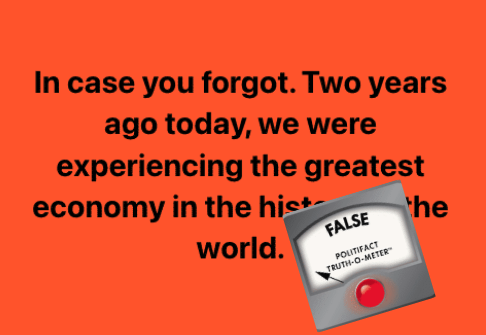 The message of these posts is a drastic overstatement, economists say, whether you look at just U.S. history or all of world history.

While the U.S. economy prior to the pandemic was in many ways stronger than it is today, we found general agreement that there’s no support for the argument that it was "the greatest economy in the history of the world."

We looked at a similar claim just over a year ago, made by Trump himself, and rated it False.

In this achievement, Trump benefited from the continuation of trends that had been in place under the Obama recovery.

"While Trump can take some credit, I see it like the relief pitcher who comes in during the 9th inning with a seven-run lead, then boasts about winning the game," Dean Baker, co-founder of the liberal Center for Economic and Policy Research, told PolitiFact last year. "It’s fine to get some credit for holding the lead, but this is much more an Obama story than a Trump story."

By contrast, growth in the nation’s gross domestic product — probably the single most important statistic used to gauge the overall strength of the economy — was so-so on Trump’s watch.

The annual increases in GDP under Trump were broadly similar to what they were during the final six years under his predecessor, Barack Obama. And GDP growth under Trump was well below that of prior presidents.

If you adjust GDP to take account of population, the picture remains weak for the economy under Trump.

Calculations by Burtless found that inflation-adjusted GDP per capita prior to the pandemic increased 1.9% annually under Trump, which makes this three-year period the 16th highest among the past 30 non-overlapping three-year periods — right about average compared with his predecessors.

Economists added a couple other factors that cast doubt on the supremacy of the economy under Trump.

One is wages. Adjusted for inflation, wages that began rising during the Obama years continued to increase under Trump. But these inflation-adjusted wage increases were modest compared with the 2% a year seen in the 1960s. "This is not what you would expect with a 3.5% unemployment rate," Baker said, alluding to the pre-pandemic rate of February 2020.

In addition, federal deficits relative to GDP have historically fallen during "great" economic periods, such as the 1960s and the late 1990s, when unemployment rates weren’t much higher than what the U.S. experienced before the pandemic, said Steve Fazzari, an economist at Washington University in St. Louis.

By contrast, under Trump, the federal budget deficit widened even before the pandemic hit.

Another factor undermining the claim about Trump’s economy is that the Federal Reserve was feeding the economy with historically low interest rates — rates on par with what the Fed usually enacts during poor economic times to revive the economy. In fact, the Fed went so far as to interrupt its plan to "normalize" interest rates by stopping interest-rate increases in early 2019, and it began cutting rates in August 2019, well before the pandemic. (The Trump administration made it clear that it wanted to keep rates low.)

This "certainly contradicts the assessment of the economy as being ‘great,’" Fazzari said.

Burtless also looked at the growth rate in personal consumption per person, adjusted for inflation — a metric that for many families is the bottom line of economic activity, determining how much they can spend on food, clothing, housing, health care, and travel.

In Trump’s three years in office through January 2020, real consumption per person grew by 2% a year. Of the 30 non-overlapping three-year periods since 1929, this ranks Trump 12th from the bottom.

It’s worth noting that presidents can have an impact on economic conditions, but they are not the only factor. Oil price fluctuations, changes in technology and the state of the global economy are among the things outside of their control.

In Trump’s case, even the things he did, such as a major tax bill in 2017, had "disappointing" results for economic growth, Fazzari said.

Specifically, Fazzari pointed to the inflation-adjusted rate of nonresidential private fixed investment, which measures purchases of such items as nonresidential structures, equipment and software. This metric rose for a while after the tax cut passed, but since then has been on a downward trend and actually went negative in late 2019 before collapsing during the pandemic.

Facebook posts said, "In case you forgot. Two years ago today, we were experiencing the greatest economy in the history of the world."

Economists offer multiple data points that undermine this assertion. While unemployment was near historical lows under Trump, growth in gross domestic product was well below what previous presidents achieved, and other metrics such as wages and business investment ranged from decent to mediocre.

Email interview with Dean Baker, co-founder of the Center for Economic and Policy Research, Sept. 30, 2020