Amid a real-world supply chain backlog at the Port of Los Angeles, social media users are sharing images of maps that appear to show hordes of vessels idling in ocean waters, waiting to dock.

"All sitting ships... I don’t care what y’all say things are about to get real," reads the caption of one viral image of a map shared on Facebook. "Welcome to the next Trojan horse." 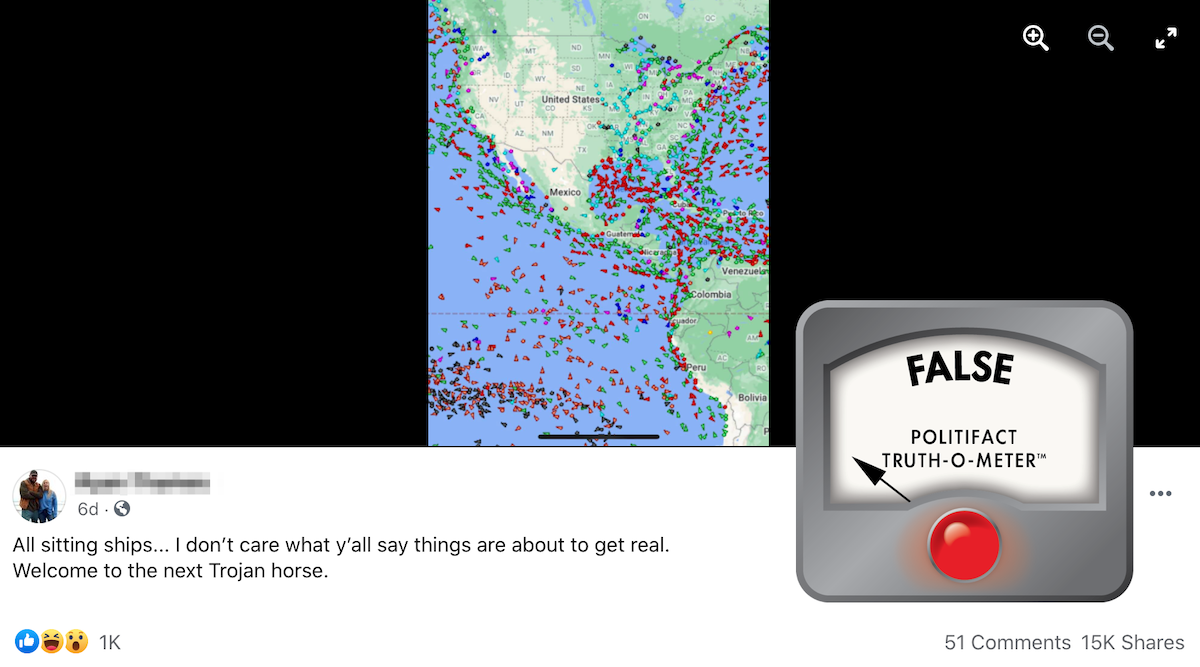 While there has been a record-breaking number of ships at anchor in California waiting to unload their cargo, most of the vessels in this Facebook image are actually moving.

The screenshot was taken from the MarineTraffic website, which has a live map that provides real-time information on the movements and current locations of ships in harbors and ports around the world.

"This appears to be an image of our map, centered on the Americas, showing all vessels currently transmitting their position via AIS," said Georgios Hatzimanolis, a media strategist at MarineTraffic. "They are clearly not all ‘sitting ships’ as the vast majority of them are in fact in transit."

The ships that appear as an arrow icon are in transit, while the ones that appear as dots are stationary. The different colors represent different types of vessels. Cargo ships are green, tankers are red and passenger vessels are blue.

Experts say that the real backup of cargo ships is being caused by labor shortages, holiday buying surges and other COVID-19 related issues, and that these supply-chain disruptions are to be expected as the world continues to navigate the pandemic.

On Oct. 13, the Biden White House announced a series of measures to relieve the supply chain issues. One development: the Port of Los Angeles will operate 24 hours a day, seven days a week.

A Facebook post claims that a screenshot of a map shows hundreds of "sitting" ships around the Americas waiting to dock.

That’s inaccurate. The map is from MarineTraffic’s website and shows all the vessels transmitting their positions. Some are sitting, but the vast majority are in transit.

PolitiFact, No, back-up of cargo ships off Southern California coast not due to ‘manufactured supply-chain halt’, Oct. 1, 2021