On Oct. 21, President Joe Biden answered audience questions at a town hall hosted by CNN in Baltimore. That night, a claim about the president purportedly making a derogatory gesture at a Black man in the crowd started to spread on social media.

"Biden flashed the white power sign while a black man was asking him a question," the post says. "I’m literally shaking."

The post includes an image of the president during the town hall holding his hand up to his eye with his thumb and pointer finger joined and his other fingers up — a hand gesture that typically means "OK" but in recent years has been connected to white supremacy. 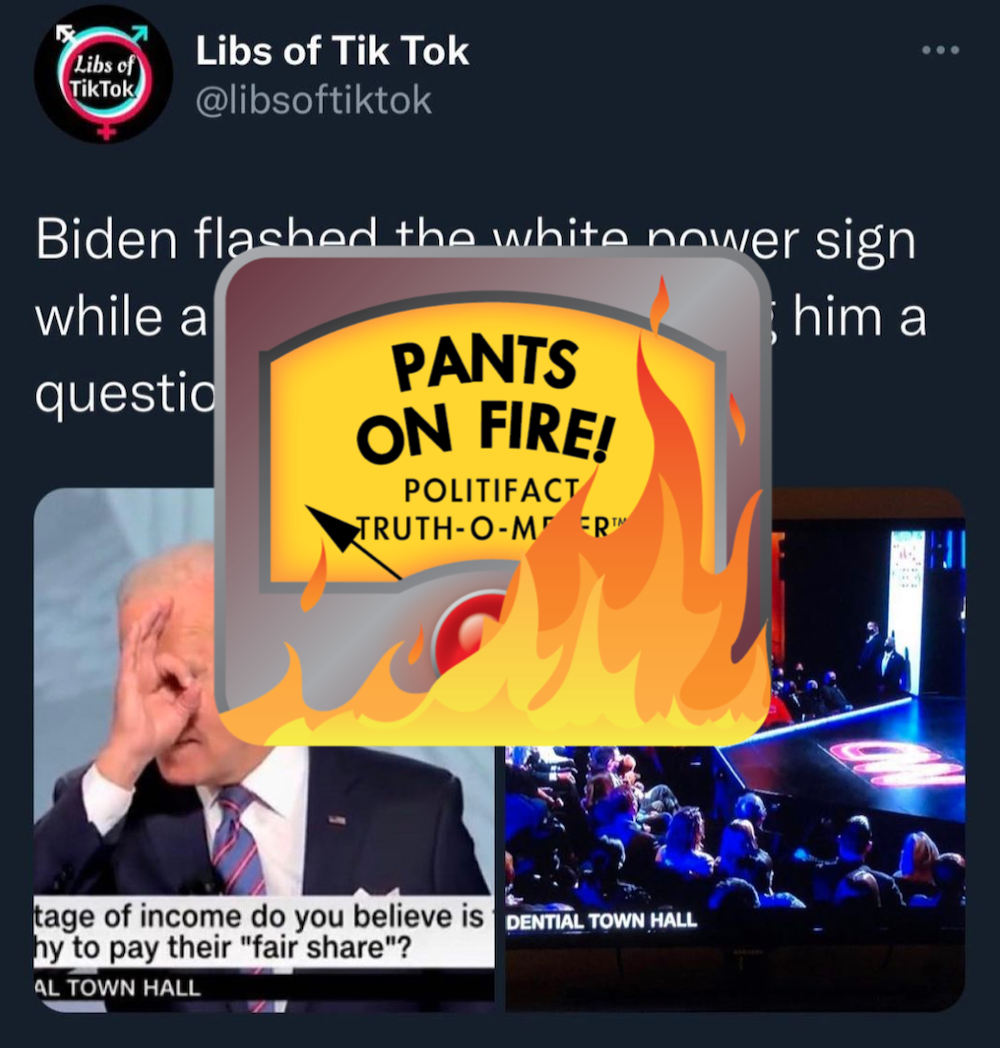 (Screenshot from Instagram)
This post was flagged as part of Facebook’s efforts to combat false news and misinformation on its News Feed. (Read more about our partnership with Facebook.)
We reviewed a recording of the town hall and starting around the 13:20 mark, a Baltimore real estate agent named Ben Frederick asked Biden about income taxes.
"IRS data shows that the top 5% of income earners pay 60% of the income taxes in this country," Frederick said. "I hear you repeatedly say that the wealthy are not paying their fair share of income taxes. What is the percentage of income that you believe is fair?"
Biden replied that corporate America "is not paying their fair share."

"You have 55 corporations, for example, in the United States of America, making over $40 billion, don’t pay a cent," Biden said, bringing his fingers forming a circle to his eye as pictured in the Instagram post. "Not a single little red cent."

First, a word of caution about interpreting that gesture as a white power gesture. According to the Anti-Defamation League, in 2017, members of the website 4chan falsely claimed that it represented the letters "WP" for "white power."

"The hoaxers hoped that the media and liberals would overreact by condemning a common image as white supremacist," the Anti-Defamation League says in this article explaining the gesture. While overwhelmingly people use the gesture to signify assent or approval, "as well as other usages unrelated to white supremacy," the league says, it has also been used as a sincere expression of white supremacy.

In this case, however, the context makes clear that Biden is using the gesture to illustrate the number zero, as in how many cents he said some corporations pay in taxes.

That’s also how Frederick, the man who asked the question, interpreted the gesture.

"He was saying the biggest corporations pay zero income tax," Frederick told us. "It had nothing to do with race of any kind whatsoever."

"I am most definitely a white man," he said.

Viral image
stated on August 7, 2022 a Facebook post:
Photo shows electric cars that were bought for civil servants in France and then abandoned because “it was too expensive to replace the batteries.”

Viral image
stated on July 20, 2022 an Instagram post:
A Texas farmer was “arrested for using illegal immigrants for free labor by pretending to be Joe Biden.”

Viral image
stated on July 12, 2022 a Facebook post:
Photo shows a woman who is wanted for impersonating a nurse and kidnapping an infant from a local U.S. hospital.