Dan Sullivan
stated on March 23, 2022 in a Senate hearing:
In cutting greenhouse gas emissions, the United States is “the leader in the world by far.”

Alaska Republican Sen. Dan Sullivan says one of the best moves the United States could make is to speed up the shift in places like China and India from coal to natural gas.

Sullivan has a plan to increase American natural gas production, liquify it and ship it overseas. His key supporting argument is the hefty 14% drop in American carbon dioxide emissions over the last 15 years.

"If every other country in the world had a record like this, where do you think we would be on global emissions?" Sullivan said at a March 23 Senate hearing. "We are the leader in the world by far."

Whether the U.S. is the world leader in cutting emissions depends on how you measure things. In total metric tons, Sullivan is right. But in relative terms, many economic peers achieved steeper declines. 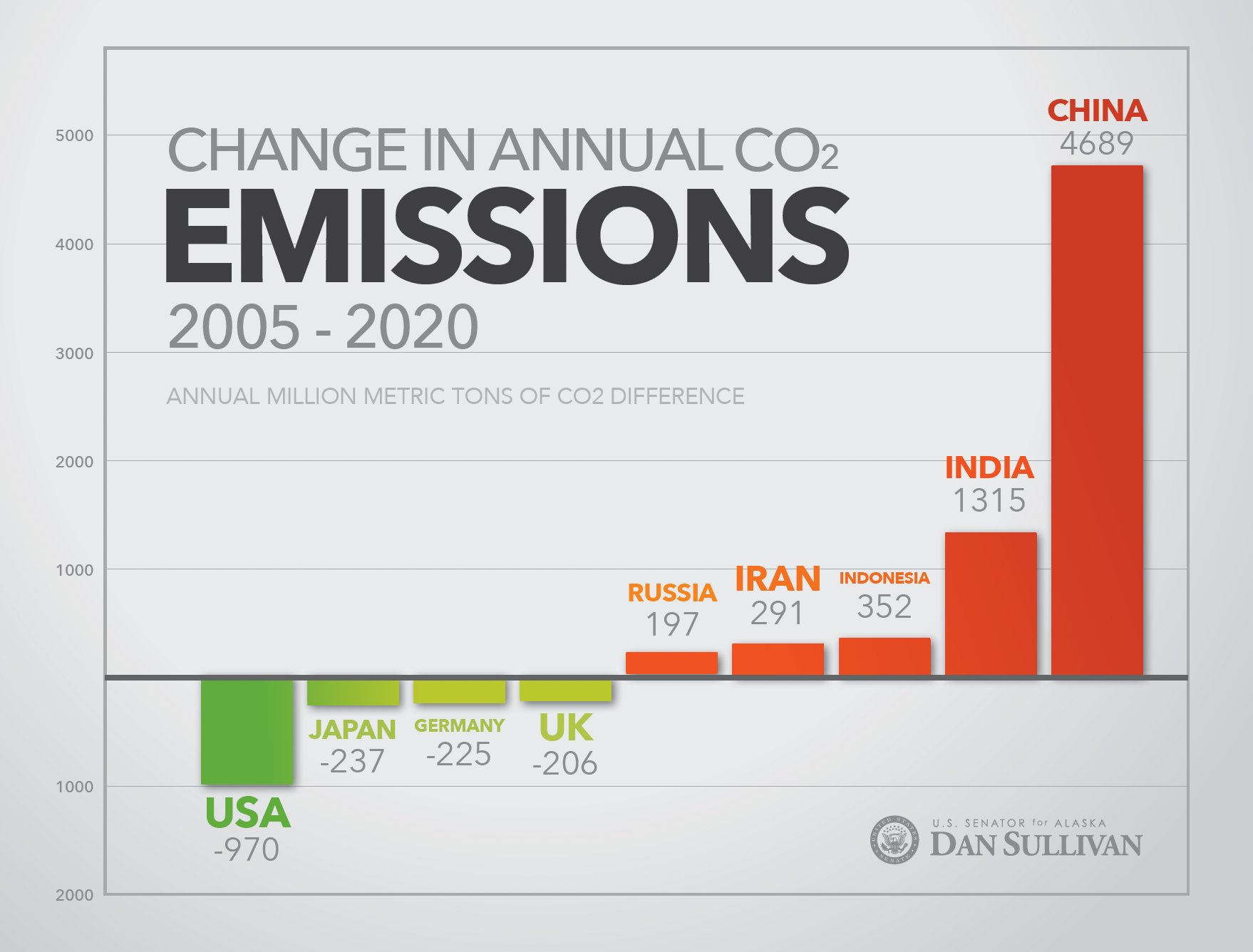 Sullivan’s staff pulled these numbers from the website Our World in Data, a reliable resource based at the University of Oxford in England. The numbers are accurate, although climate trackers warn against including 2020 numbers, because the COVID-19 economic shutdown distorted normal emission patterns. In our analysis, we looked at 2005 to 2019.

The first caveat to Sullivan’s approach is that he uses absolute numbers. Rob Jackson, an earth systems professor at Stanford University, said the chart is "conveniently misleading." The United States has the largest reduction because, in 2005, Jackson said, it had the highest emissions.

"Other countries, in Europe in particular, have done far more than we have to reduce greenhouse gas emissions," Jackson said.

Looking at the percentage change in carbon dioxide emissions, the United Kingdom made the greatest progress, with a reduction of 35%. Italy, France and Germany came next. The United States and Japan tied for fifth place with reductions of about 14%.

Sullivan spokesman Ben Dietderich agreed that the relative changes reshuffled the rankings, but he countered that the absolute number of tons mattered most. It’s the tons of carbon dioxide that affect the global climate, he said. At the end of the day, Dietderich said, the United States made the largest contribution to reducing carbon dioxide emissions.

Jackson raised another issue with Sullivan’s chart — it left out emissions per person. China’s emissions are enormous, but the country also has 1.4 billion people. Viewed through that lens, despite the decline in U.S. emissions, the United States remained the larger emitter per capita.

"Our per capita emissions are still twice China’s and eight times higher than India’s," Jackson said.

Factoring in all greenhouse gases, the U.S. trends are less dramatic. The total decline goes from a reduction of 879 million metric tons to 607 million metric tons. As a percentage, the decline goes from 14.3% for carbon dioxide alone to 9.5% for all greenhouse gases combined. The numbers work that way because it doesn’t take much of those other gases to put a lot of carbon into the air.

While natural gas was the single largest factor in cutting U.S. emissions, major contributions also came from the rise in wind power and efficiency gains in American industry that lowered demand.

Sullivan’s point was that if other countries followed the United States’ lead, global emissions would fall. Since the blossoming of natural gas production played a large role in the U.S., it makes sense, he said, to expand production further and export to coal-burning countries like China and India.

Not so fast, say energy researchers.

Michael Young, a senior scientist at the University of Texas at Austin, said building the pipelines and processing plants to send natural gas overseas adds carbon to the atmosphere. It’s possible, Young said, that exports to Asia could reduce emissions there if they replaced coal or wood.

"But it’s also true that liquified natural gas from the U.S. will embed carbon dioxide emissions in the production and transportation of the fuel, reducing the benefits," Young said. "Whether the two balance out depends on many factors."

Ben King, a senior analyst at Rhodium Group, a private research center, said while industry is getting better at preventing the release of methane gas, it still happens in the liquefaction process.

Sullivan said the United States is "the leader in the world by far" in cutting greenhouse gas emissions.

In absolute terms, that is accurate – but it isn’t telling the full story. Relative to the scale of emissions in other leading economies, other countries show much deeper reductions. Sullivan also left out emissions per person in the United States. While those have gone down, they are still about twice as high as they are in China.

Our World in Data, CO₂ and Greenhouse Gas Emissions, August 2020