Michael Savage
stated on April 25, 2022 in a Facebook post:
Blinken, Austin trip to Kyiv may have been staged

In this image provided by the U.S. Department of Defense, Secretary of Defense Lloyd Austin, left, and Secretary of State Antony Blinken, right, meet with Ukrainian President Volodymyr Zelenskyy on April 24, 2022 in Kyiv, Ukraine.

The April 24 trip almost didn’t happen, the New York Times reported, because Zelenskyy mentioned the planned meeting during a news conference the day before, blowing the U.S. officials’ cover. The secretaries stopped in Poland first, then Blinken and Austin traveled first by car, then by train to Kyiv, leaving members of the media behind because of what officials called security reasons, the Times reported.

Reporters were briefed later in Poland by Blinken and Austin and the U.S. Department of Defense provided Feb. 24 photos of the pair meeting with Zelenskyy and his staff in a room with  a conference table and an emblem showing Ukraine’s coat of arms on the wall. But the media-less trip prompted some speculation on social media that the whole trip was fabricated.

In an April 25 Facebook post, conservative author Michael Savage asked, "How do (sic) really know if BLINKEN & AUSTIN were actually in KIEV? was this meeting with Zelensky staged somewhere else? Poland? (no press traveled with them!)"

No, the meeting in Kyiv was not staged or held in Poland. There is no evidence of that. Photos show the room is the same one Zelenskyy has used for meetings — both before and after the Russian invasion began. A spokesperson for one U.S. senator who has also met Zelenskyy in that room also confirmed it is the same space. 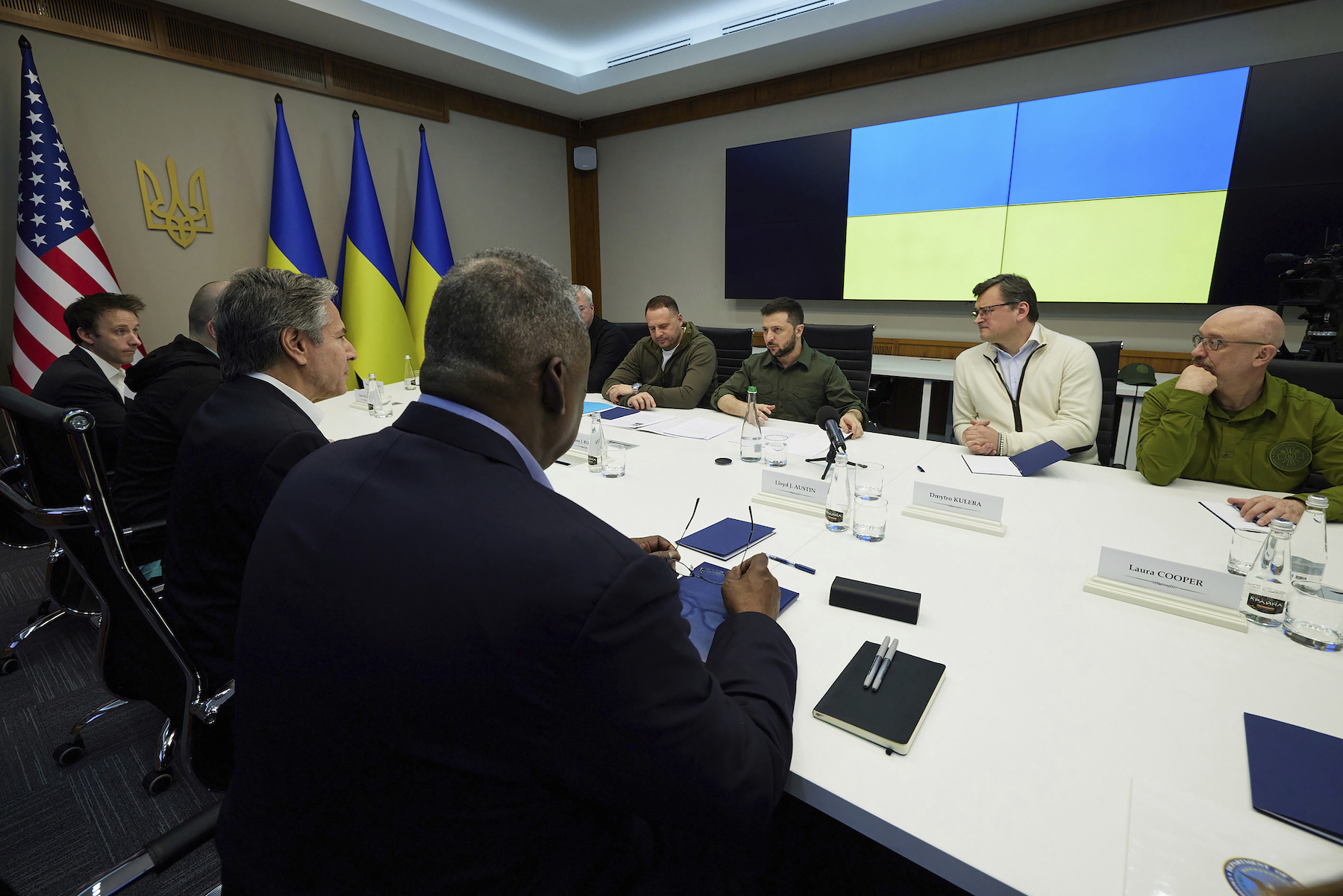 We found multiple images in which you can see the room with the same white table and large TV screens on either side of it. The Ukrainian coat of arms seen between Zelenskyy and the two Cabinet members is visible in other photos, as is the row of air vents above it. 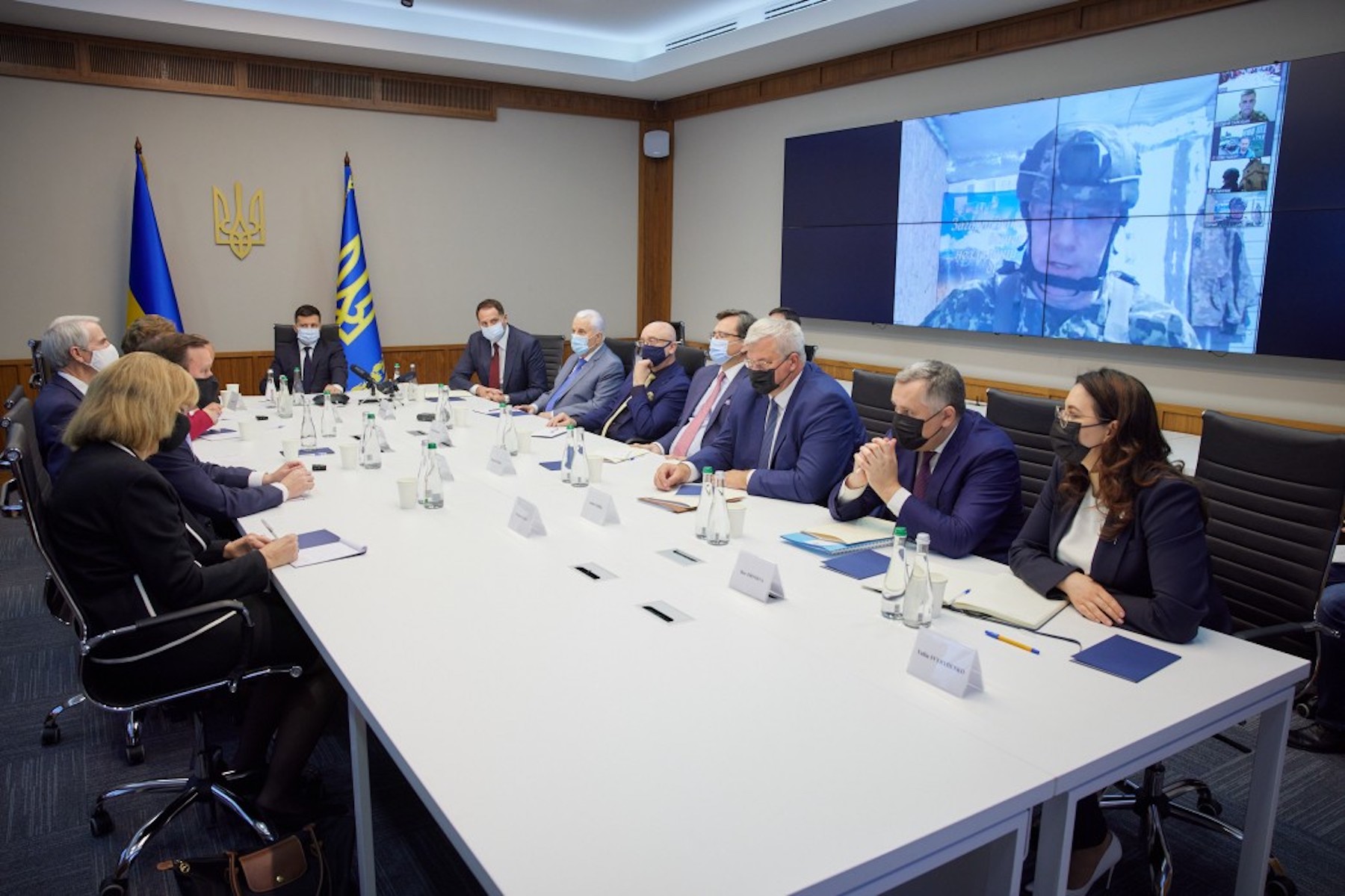 A spokesperson for Murphy confirmed to PolitiFact that the room he met the Ukrainian president in is the same one seen in the photos of Blinken and Austin’s visit. It was held in the Presidential Administration Building in Kyiv, the spokesperson said. 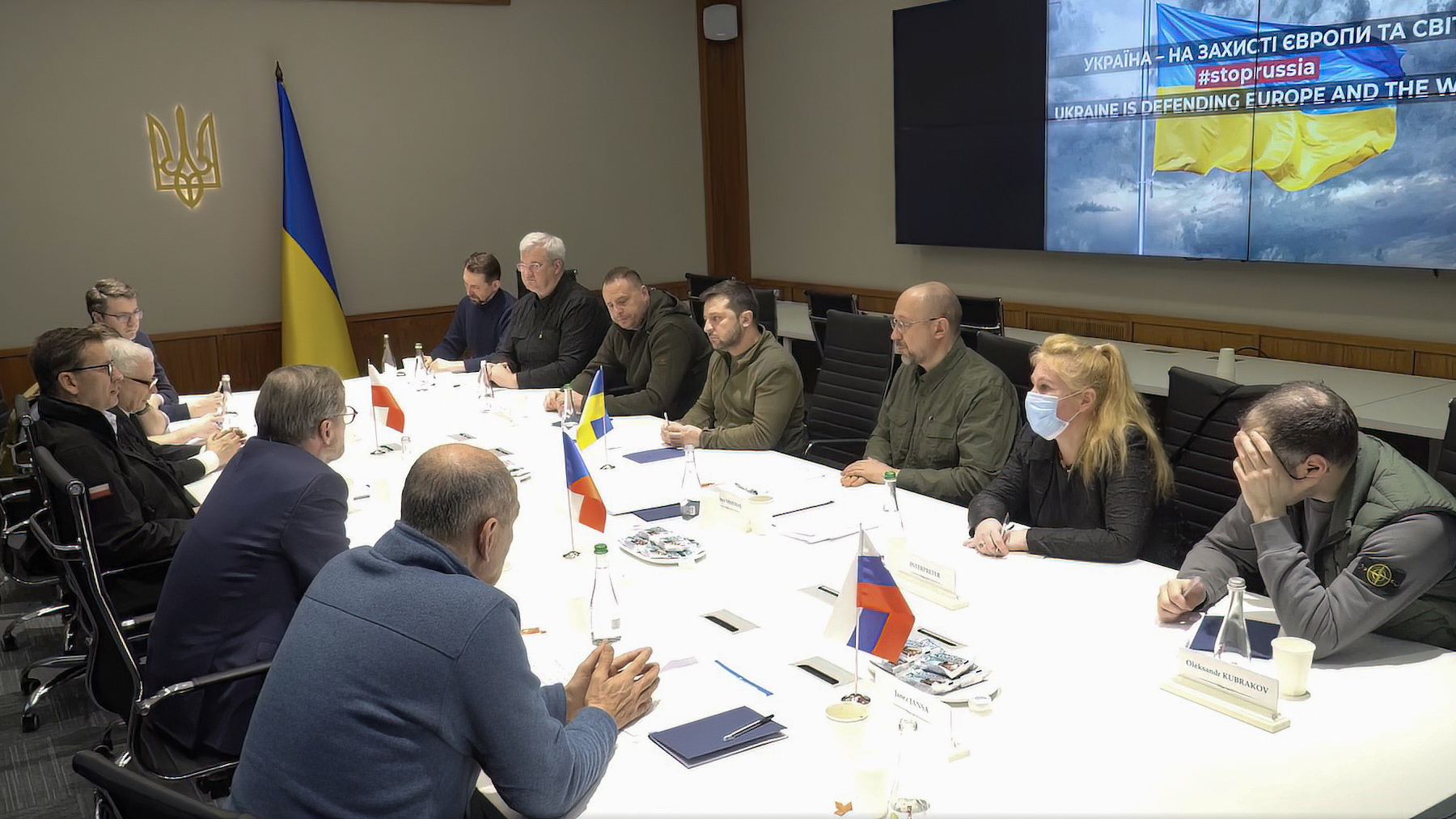 Images of that room can also be found on the Ukrainian president’s official website and in photos of a meeting on March 15 in Kyiv attended by the premiers of Poland, the Czech Republic and Slovenia.

Zelenskyy also held a video conference meeting in that room with representatives from Facebook on Sept. 27, 2021.

Savage suggested on Facebook that a secretive visit to a warzone in Kyiv was held elsewhere because no members of the media were there to document the trip.

The media was not allowed to accompany Blinken and Austin on the trip for security reasons, but that doesn’t mean it didn’t happen in Kyiv. Multiple photos show the exact same room in use by Zelenskyy in meetings with others well before the war began.

President of Ukraine official website, "For the first time in ten years, Ukraine has launched its satellite into space - Volodymyr Zelenskyy," Jan. 13, 2022

President of Ukraine official website, "President discussed security situation in Donbas and along Ukrainian-Russian border with US Senators," June 2, 2021

Instagram posts
stated on January 27, 2023 an Instagram post:
"Doctors say colon cancer is on the rise due to toxins absorbed while cooking food (in) the microwave.”