One Facebook post claimed Reinhart was in cahoots with another former president when it came to preparing for the search.

"BREAKING: Messages between former President Barack Obama and Judge Reinhart foreshadowed the unlawful raid on former Trump’s Mar-a-Lago estate," the post said before it was apparently deleted (we found a similar one here). "Instagram account @patriotave is posting leaked messages. Follow @patriotave before they are taken down!!!" 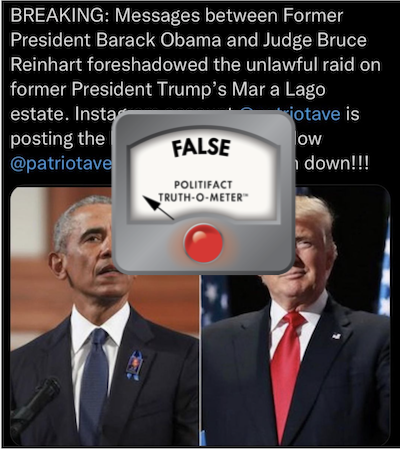 This post was flagged as part of Facebook’s efforts to combat false news and misinformation on its News Feed. (Read more about our partnership with Facebook.) It was not the first time since the warrant was executed that Reinhart was a target of misinformation.

We followed the initial account the post referred to but there were no leaked messages to be found there. These nesting doll-like accounts don’t know something that hasn’t previously been reported. Though records show Reinhart donated $1,000 to Obama when he was running for president in 2008, and another $1,000 to the Obama Victory Fund, a fundraising committee, we found no evidence to support the claim that messages between the two men were leaked in connection with the search of Trump’s estate. There are no credible news reports, nor other other sources to corroborate this post.

Facebook posts
stated on September 27, 2022 a Facebook post:
As Hurricane Ian approached, President Joe Biden said, “a vital part of preparing for hurricane season is to get vaccinated now.”

Viral image
stated on September 28, 2022 an Instagram post:
A news anchor warned that if Hurricane Ian “moves 20 miles to the west … you and everyone you know are dead.”