In recent weeks, social media users have criticized Florida Gov. Ron DeSantis over his policies to crack down on classroom instruction around LGBTQ issues and race.

The latest instance might have left some parents fearing for their school libraries.

The term "anti-woke" is reminiscent of Florida's "Stop W.O.K.E. Act," which allows the state to regulate how race and gender is addressed in school. Although "Freesus Patriot" later said the list was satirical, some people thought it was authentic.

The list featured 25 popular books, including Harper Lee’s "To Kill a Mockingbird," Alice Walker’s "The Color Purple" and Madeleine L’Engle’s "A Wrinkle in Time." 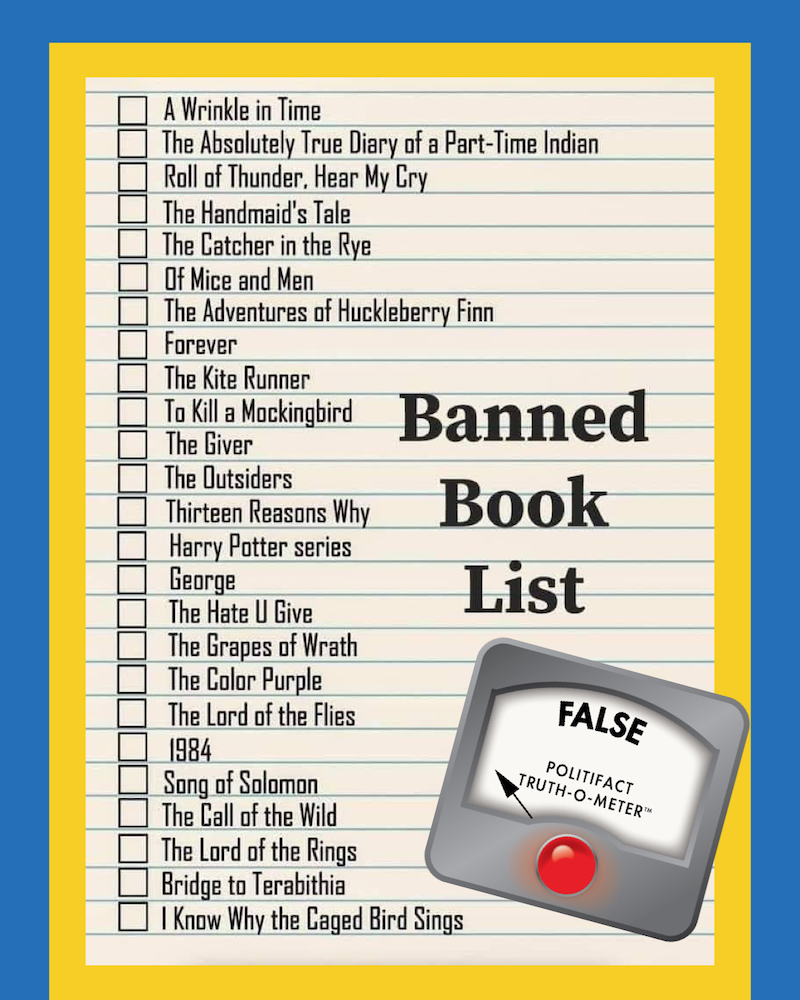 Randi Weingarten, president of the American Federation of Teachers, tweeted "books we have taught for generations," alongside the list. She later said she should have "double-checked" before sharing.
"Star Wars" actor Mark Hamill also shared a screenshot of the list on Twitter — amassing more than 100,000 likes and 24,000 retweets.
The Florida Department of Education did not respond to PolitiFact's request for comment. However, the governor's office called the list "completely fictitious."
"The image is fake," said Bryan Griffin, DeSantis' press secretary. "There is no banned book list at the state level. The state sets guidelines regarding content, and the local school districts are responsible for enforcing them."
Griffin also noted that the state’s Benchmarks for Excellent Student Thinking, or B.E.S.T., standards recommend several of the books included in the "anti-woke" list.
"To Kill a Mockingbird" and Jack London’s "The Call of the Wild" are recommended to eighth graders in Florida. George Orwell’s "1984" is a suggested book for ninth graders, while John Steinbeck’s "Of Mice and Men" and William Golding’s "Lord of the Flies" is recommended for 10th graders.
Florida adopted the B.E.S.T. standards, which measure literacy, after DeSantis eliminated Common Core educational standards in 2020.
School districts across Florida have banned around 200 books, according to a report published by PEN America, a nonprofit that tracks book banning in the U.S.
By PEN America’s count, Florida ranked third in the U.S. for books banned by schools from July 2021 to March 2022, trailing only Texas and Pennsylvania.
Eight of the tweet’s 25 listed books were challenged in Florida's Indian River County School District in February — "The Color Purple," Margaret Atwood’s "The Handmaid's Tale"; Alex Gino’s "George"; Judy Blume’s "Forever"; Angie Thomas’ "The Hate U Give"; Khaled Hosseini’s  "The Kite Runner"; Jay Asher’s "Thirteen Reasons Why"; and Sherman Alexie's "The Absolutely True Diary of a Part-Time Indian."
The books were removed during an investigation, but the district later restored them, concluding they were appropriate for students.
Likewise, Walton County in the Panhandle temporarily removed 58 books, including "George," "Forever," "The Hate U Give," "The Kite Runner," "Thirteen Reasons Why" and "The Absolutely True Diary of a Part-Time Indian," for review in April.
"The books on this list have been banned before, some in prominent places; but they have not all been banned recently, and only some have been banned in Florida," said Summer Lopez, chief program officer at PEN America.
HB 1467, which DeSantis signed into law, will require the state to publish a list of books challenged by parents — but won’t require their removal.
The viral image doesn't depict an authentic list of books banned in schools across Florida. We rate claims that say it does False.

Ron DeSantis
stated on January 17, 2023 a press conference:
"Almost every study now has said with these new boosters, you're more likely to get infected with the bivalent booster."

Sean Hannity
stated on January 10, 2023 a TV segment:
“The White House is now attempting to ban all gas ovens and burners.”

Joe Biden
stated on December 16, 2022 a town hall for U.S. veterans:
After Joe Biden became vice president, at the behest of his father, he gave his uncle, Frank H. Biden, a Purple Heart for serving in the U.S. military during World War II.

Rita Harris
stated on December 14, 2022 a press release:
Florida Senate Bill 2A does not provide "immediate relief" to homeowners dealing with high property insurance rates and "will force some … constituents to pay up to 20% more."

Karine Jean-Pierre
stated on December 9, 2022 a press conference:
Sen. Kyrsten Sinema "voted with the president 93% of the time."