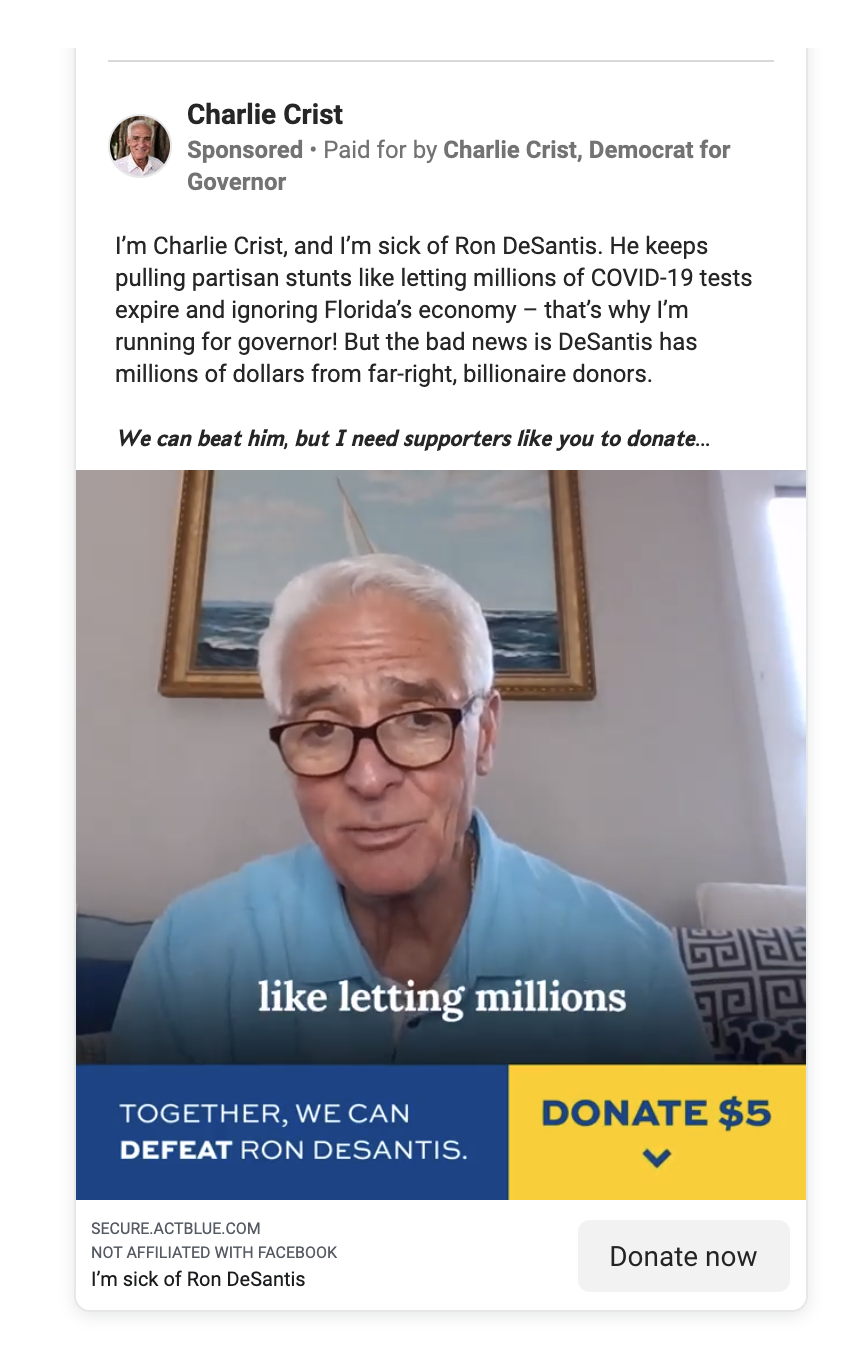 Crist represents Florida’s 13th Congressional district but is not seeking re-election in 2022. The former Republican previously served as the state’s governor.

DeSantis is running for a second gubernatorial term in 2022 and is seen as a contender for the 2024 GOP nomination for president.

Number of tests expired not in the 'millions'

Florida Agriculture Commissioner Nikki Fried said on Dec. 30 that Florida had "a significant number of COVID-19 tests stockpiled that are set to expire imminently." Fried, another Democratic candidate for governor, called on DeSantis to release the tests immediately to cities and counties.

We didn’t find any evidence that the expired tests numbered in the millions. When we asked Crist’s campaign about the ad, which began running Jan. 28, a spokesperson said Feb. 3 that "millions" was "a typo" and that the ad would be corrected. A new version of the ad, posted Feb. 3, says "up to a million" in the text, but the same video is used, in which Crist says "millions."

Florida emergency management director Kevin Guthrie on Jan. 6 said the state had between 800,000 and 1 million rapid-test kits manufactured by Abbott in a warehouse "that did expire" earlier in 2021.

DeSantis said the same day the tests were not distributed earlier in 2021 because of a lack of demand from testing sites. He also said they couldn’t be distributed in December — when Floridians were waiting in long lines at community testing sites — because state officials were waiting for federal approval for the tests to be used after their listed expiration.

Florida began distributing the tests after a Jan. 7 approval from the U.S. Food and Drug Administration.

Abbott and the federal government, in effect, gave Florida a three-month extension in September 2021 so that the tests would not be considered expired until late-December 2021, Guthrie said. Abbott made the extension request, as required by the U.S. Food and Drug Administration.

The FDA regularly grants requests to extend the shelf life of medical products if the products have been properly stored.

But the tests remained in the warehouse after that initial extension. Guthrie said that before the tests expired in late-December, the state asked Abbott to request a second extension. The tests’ December expiration date passed before the FDA granted that additional extension on Jan. 7.

On Jan. 12, DeSantis said at a news conference that the FDA’s second three-month extension meant the tests could be used by March 2022.

Florida Health Department spokesperson Jeremey Redfern told PolitiFact on Feb. 2 that 99% of the tests have been distributed to testing sites.

Crist overstated the number of tests that expired, it was up to 1 million, not "millions." Crist’s statement leaves the impression that the tests were no longer usable. However, because the tests were stored safely, the FDA has allowed the tests to be used by March 2022.

Nearly all tests have been distributed to testing sites, according to the state’s health department.

DeSantis has acknowledged the tests twice passed their expiration dates in 2021. He attributed that to little demand from testing sites during most of the second half of 2021 and pending federal approval regarding the tests’ safety.

Crist’s statement contains an element of truth but ignores critical facts that would give a different impression. We rate it Mostly False.

CBS News, "1 million COVID tests that expired in a Florida warehouse get FDA approval for use," updated Jan. 14, 2022