J.D. Vance
stated on February 7, 2022 in an ad on Facebook:
“Joe Biden uses the ATF to illegally track your gun transactions.”

An ATF worker scans a firearm transaction document from a dealer no longer in business, at the ATF National Trace Center in Martinsburg, West Virginia. (AP)

The Ohio U.S. Senate race is wide open, with both Republicans and Democrats vying for the seat currently held by retiring Republican Rob Portman. In a Facebook ad, GOP candidate J.D. Vance took aim at Rep. Tim Ryan, a contender on the Democratic side.

"Tim Ryan pretends to care about the working class, but he's a fraud who does nothing while his friend Joe Biden uses the ATF to illegally track your gun transactions and trample on your 2nd Amendment rights," Vance’s ad said Feb. 7. "Unlike Tim Ryan, I'll fight to end Biden's illegal gun database."

The Bureau of Alcohol, Tobacco, Firearms and Explosives is a frequent target of gun rights supporters. ATF operates under a number of legal restrictions, and here, we look into whether it has violated those limits, as Vance claims.

The core complaint is that ATF has millions of records, and gun rights advocates view those records as an invitation to abuse. But the Vance campaign was unable to point to a specific act by the agency that broke the law, and we couldn’t find one either.

The Vance ad links to an interview Vance had with Fox News’ Tucker Carlson. During the brief Feb. 4 segment, Vance talked about an ATF "database" that "is ultimately a back door to a gun registry in this country."

"Once you allow gun registry, you effectively allow the disarming of your citizenry," Vance said.

A gun registry would be a comprehensive database of every gun owner in America, showing who they were, where they lived and what weapons they owned. Lawmakers have passed laws aimed at preventing the ATF from spending a dime on creating such a database. As recently as 2011, Congress barred the ATF from "consolidating or centralizing" records.

Fox News did not say the ATF actually had a gun registry. As Vance mentioned an ATF database, the chyron changed to say "Biden admin appears to be creating unlawful federal gun database." Appearing to do something is not the same as doing it.

There’s no particular tie between Biden and gun records. Most of the gun records Vance is talking about predate Biden’s administration by decades, although Biden has drawn the ire of gun rights supporters for proposing that firearm dealers retain their records forever, rather than disposing of them after 20 years. 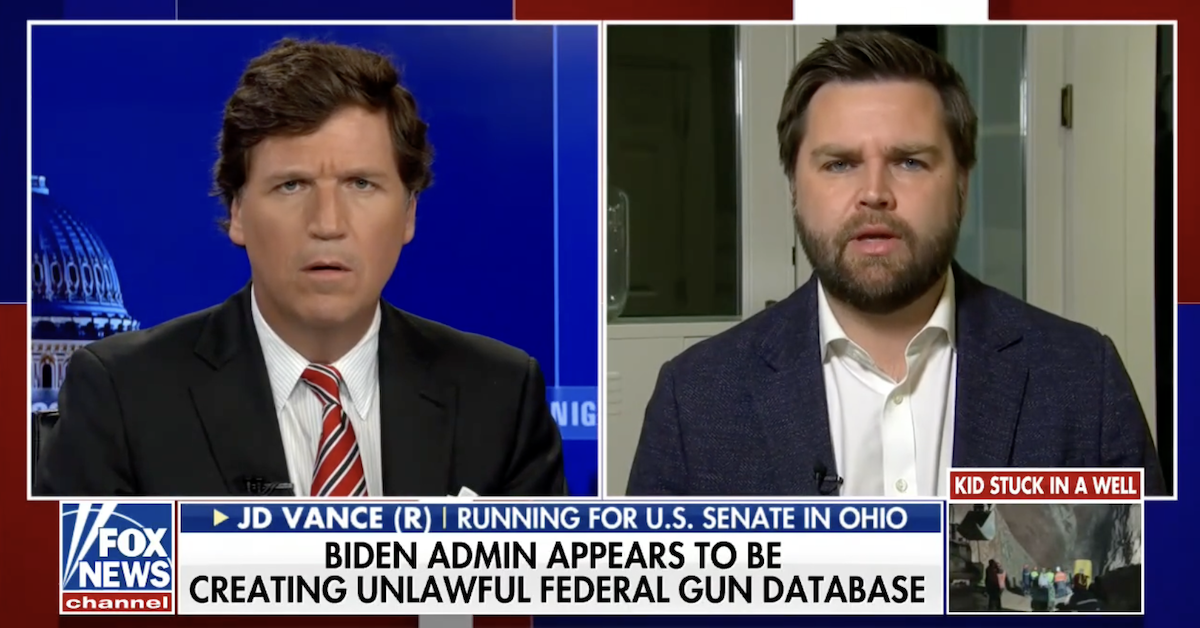 We asked the Vance campaign what ATF action had been found illegal. The campaign press office gave no example, and cast the ad’s claim of illegal ATF activity as an opinion, rather than an assertion of fact.

In his interview, Vance voiced concern about the ATF collecting records. The argument is that it would be a short hop from simply holding the records to converting them into a comprehensive database. What’s missing is evidence that any such hop has been made.

ATF has long been caught in the tension between the need to keep records to catch criminals and concerns about how those records could be used. Over the years, both Republican and Democratic lawmakers have passed laws aimed at allowing the agency to help law enforcement when a weapon is used in a crime. That requires a lot of record keeping. Congress has paired those laws with others that set detailed limits that often make those records difficult to use.

The records of firearm dealers who go out of business is a perfect example.

The ATF manages several large collections of forms that track when firearms change hands. This includes when a manufacturer sells weapons to a licensed gun store, when federally licensed firearm dealers sell to other dealers, and when they sell to a retail customer.

In a country that has more privately owned guns than people, these exchanges happen often. One particular collection has amassed more than 920 million records over the past five decades. About 867 million are images of the records, and the rest are hard copies waiting to be converted to images. These come from licensed dealers that have gone out of business. Under a 1968 law, they must send their sales records to the ATF. The records contain the make and serial number of the weapon and the company or person who bought it.

The Out of Business Records are a critical tool for investigating gun crimes. When law enforcement officers recover a gun connected to a crime, they turn to the FBI and ATF to trace who owns it. The first step is to call the gunmaker, which leads to a wholesaler, which leads to a retailer, and so on. About 40% of the time, this process leads to a company that is no longer in business. That’s when the Out of Business Records come into play.

It’s this bank of records that Vance and some other gun-rights advocates warn will become the seed of an illegal national database of gun owners. But the Out of Business Records system isn’t set up to work that way. It simply doesn’t fit the modern definition of a database.

By law, these forms are stored as digital images that cannot be searched by a computer. There is no way for someone to enter a serial number and have the system spit out the details from the files. It doesn’t have computer readable data fields, it can’t be sorted by field, and it can’t be queried by field.

Instead, each search is done by a staffer going through images one by one. The ATF sent us a picture of how a digital image file appears on a screen in their record tracing center. 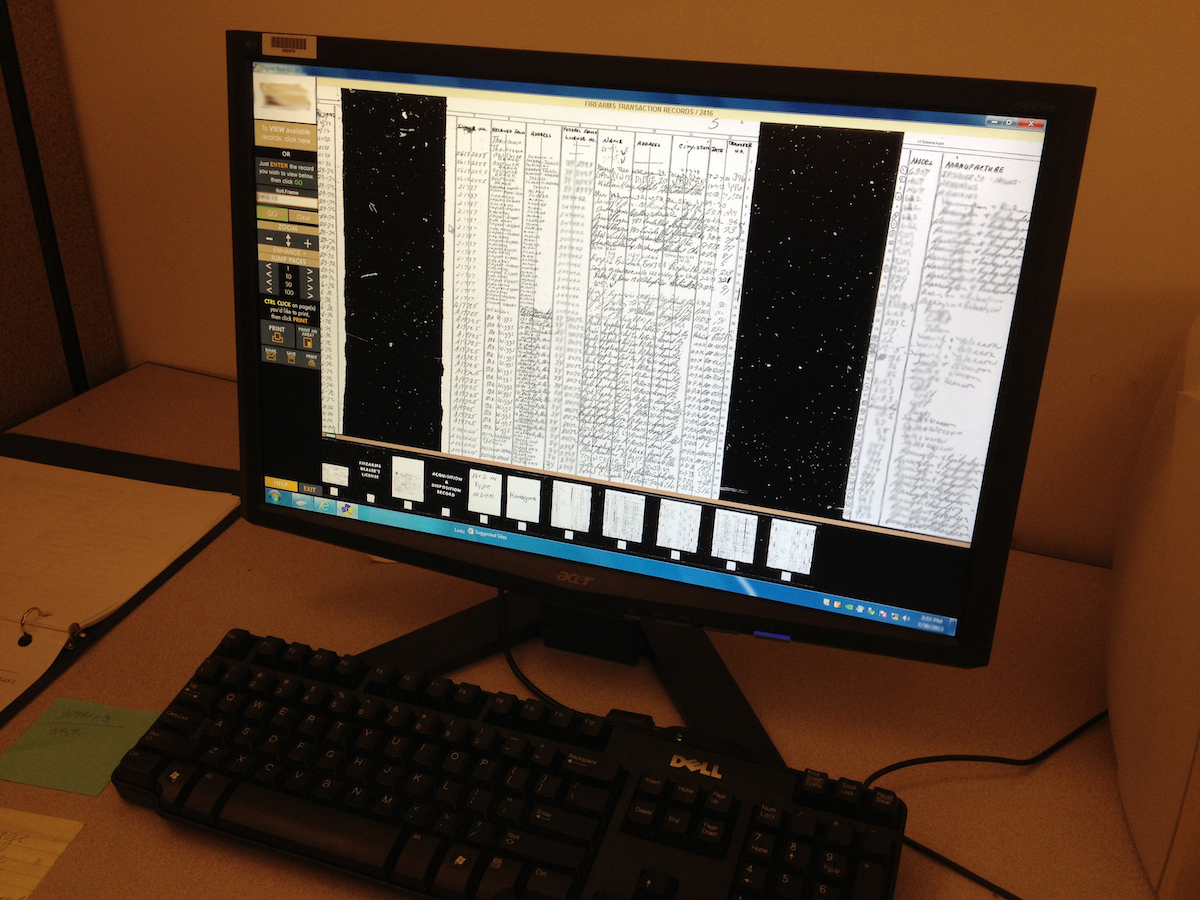 "Imagine looking at pictures on your phone," April Langwell, chief of public affairs at ATF said. "Our people sit there and literally flip through thousands and thousands of images."

That said, staff typically find a matching record in about 20 minutes, although with about 1,700 requests coming in each day, it can take a day before the search begins.

Langwell also noted that the 920 million figure doesn’t represent the number of firearms that were transferred by these dealers. Each transaction could produce three, six or even more images. Some of the recorded transactions involved more than one weapon. A majority of the transactions, Langwell said, don’t involve a person buying for their own use; they were transfers between dealers, or between a gunmaker and a wholesaler.

Vance tied this digital image system to Democrats, but it has Republican roots. It was funded as part of an omnibus spending bill in 2004 when Republicans controlled both the House and the Senate, and George W. Bush was president. Until then, old records were stored on microfiche.

The lawmakers’ agreement on the bill said that members of both parties agreed on "the need for the ATF to begin converting tens of thousands of existing records of out-of-business federal firearms dealers from film to digital images."

And it doesn’t run afoul of any law. The Government Accountability Office examined ATF legal compliance in 2016. While it found some issues with other firearms tracking systems, for the Out of Business Records, the GAO found full compliance. And for the issues it did find, it said ATF changed its practices to meet legal requirements. In one case, the ATF had decided on its own in 2009 that one program went too far and canceled it. In another instance, in response to the GAO inquiry, the ATF deleted files that went beyond its legal authorization.

Adam Winkler, who specializes in constitutional law and gun policy at the UCLA School of Law, told us he sees no truth in the claim that the ATF has broken the law.

His campaign did not identify any actual legal infraction to back the claim. Some gun rights advocates warn that the vast collection of transaction records at the ATF could lay the groundwork for a national gun registry, which would be illegal. But Biden is not involved in any such effort.

By law, the ATF’s largest collection of records can’t be searched by a computer. A 2016 GAO review found that the agency followed the law for these records, and had corrected its practices for other data systems it ran.

Government Accountability Office, ATF Did Not Always Comply with the Appropriations Act Restriction and Should Better Adhere to Its Policies, Aug. 1, 2016