Is Costco trying to avert blame for high fuel prices by telling customers at the pump to blame President Joe Biden?

That’s what one image shared on Facebook purports to show.

"Forget Stickers. Costco just went digital," read the caption on the May 27 Facebook post along with a picture that supposedly shows a Costco gas pump screen with the message, "Don’t blame us. Blame Joe Biden." (The sticker comment refers to stickers being placed on gas pumps with Biden’s face that read, "I did that!") 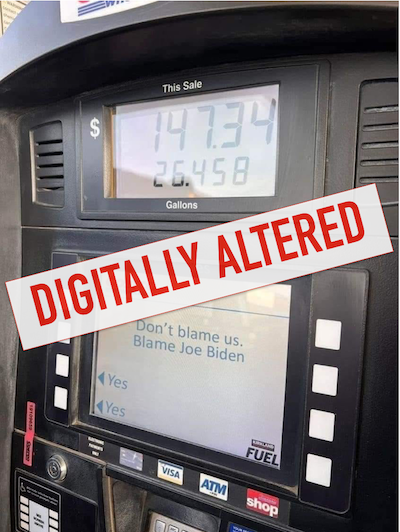 (Screenshot from Facebook)
The photograph was digitally altered. Costco said it didn’t authorize the message to appear on its gas station screens.
"The Costco gas station post/image you are referring to is not affiliated with or approved by Costco," a company spokesperson told PolitiFact in an email.
A review of the image shows signs that it was manipulated, most likely on a program like Adobe Photoshop.
Instead of "Yes" and "No" options on the screen, which are usually presented when customers are asked if they want a receipt, the Facebook image instead showed two "Yes" options.
An extra "Yes" also appears in the center of the image above the text about Biden on the lower screen — an observation Snopes made in its fact-check of the post. This can happen in Photoshop when people forget to move or delete one of the layers they were editing in the program. New layers are automatically dropped in the center of a workspace, which is where the extra "Yes" is located.
An analysis by FotoForensics, a visual research tool, also showed signs that the photo was doctored. Though the tool does not provide conclusive evidence of manipulation, it can be useful in highlighting regions of the image that were subject to splicing, drawing or otherwise edited.
Our ruling

The photograph is doctored. Inconsistencies in the image’s digital footprint show that the message was altered, and Costco representatives denied any of its screens were programmed or approved to display the words.