Viral image
stated on March 5, 2022 in a tweet:
“The Simpsons” predicted Russia’s invasion of Ukraine.

A collection of images from "The Simpsons," the long-running animated TV show on Fox, is surfacing on social media, where users are falsely claiming that it "predicted " Russia’s invasion of Ukraine.

"The Simpsons, who predicted everything, also saw this war," one post sharing the collage wrote. "The situation is serious, everyone goes to the shelters."

"Oh look," another post said. "The Simpsons predicted the Ukraine ‘war’ too. How fun is life in the DS Matrix?"

Tucker Carlson
stated on October 27, 2022 in a TV segment
The United States is "about to run out of diesel fuel ... by the Monday of Thanksgiving week."

The animated TV show has, on occasion, predicted the future — including Lady Gaga’s Super Bowl halftime show and Donald Trump’s presidency. But it did not predict Russia’s war in Ukraine.

As fact-checkers at Reuters have reported, the images from "The Simpsons" that supposedly allude to the war were doctored. 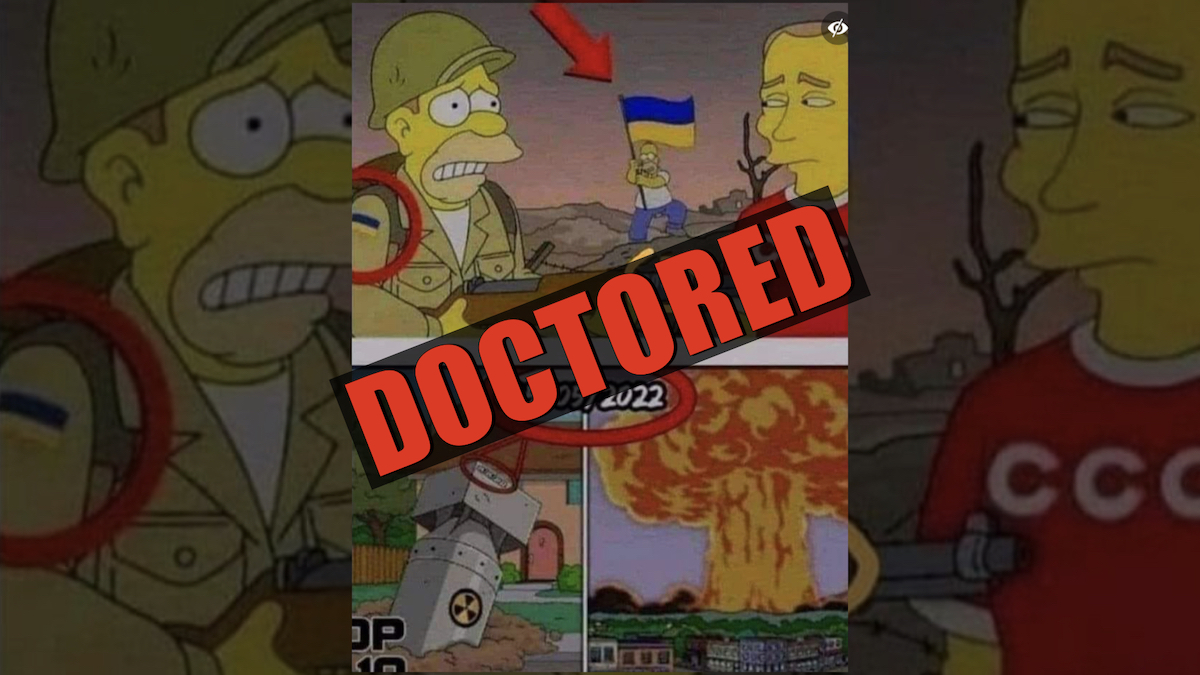 The first picture, showing a Ukrainian soldier aiming a rifle at Russia President Vladimir Putin, is a composite of multiple scenes.
The screengrab is from episode 11 of season 30, "Mad About the Toy." In the episode, the soldier appeared against the backdrop of a desolate, war-torn background. Much of the defining allusions to the invasion were superimposed onto the original frame.
Neither the Ukrainian flag nor the number "2022" appeared in the scene. The image of Homer waving a Ukrainian flag was also inserted into the picture from episode 8 of season 17, where the Simpson patriarch can be seen carrying a U.S. flag at an Italian airport.
The addition of Putin, wearing a red T-shirt and grimacing at the soldier, originated from a clip posted onto the show’s Facebook page ahead of the 2016 presidential election. In the scene, Putin, disguised as an American citizen, waited in line to cast his vote.
The second image, depicting a large projectile with a nuclear insignia buried into the Simpsons’ backyard, is not an authentic image from the animated TV show.
A reverse image search shows the image of the explosive — without the cartoon family’s house in the background — goes to 2016 when it appeared as a "limited-time decoration" in a Simpsons-themed game. The "05/05/2022" text does not appear on the original photo.
The third image of an orange, mushroom-shaped cloud rising from the outskirts of a city originated from an episode of "The Simpsons" that was released in 2010. Though the photo was not digitally altered, the episode made no reference to Ukraine.
We rate claims that these images show "The Simpsons" predicting Russia’s invasion of Ukraine False.

The Simpsons Wiki, To Surveil with Love/Gallery