Facebook posts
stated on March 28, 2022 in a Facebook post:
Says Chris Rock apologized after 94th Academy Awards, saying, “Last night I crossed a line that I shouldn’t have and paid the enormous price of my reputation as a renown comedian.”

Chris Rock presents the award for best documentary feature at the Oscars on Sunday, March 27, 2022, at the Dolby Theatre in Los Angeles. (AP)

Since actor Will Smith struck comedian Chris Rock at the 94th Academy Awards, social media users have pined for new development in the celebrity drama.

But in the absence of a comment from Rock, it appears some have resorted to crafting their own.

A March 28 Facebook post shared a purported statement from the comedian. It was flagged as part of Facebook’s efforts to combat false news and misinformation on its News Feed. (Read more about our partnership with Facebook.)

"As a comedian it can be difficult to understand which lines are to be crossed and which ones aren't," Rock’s alleged statement read. "Last night I crossed a line that I shouldn't have and paid the enormous price of my reputation as a renown comedian."

The grammatically problematic statement attributed to Rock  continued for a few more sentences with a "sincere apology" to Smith and actress Jada Pinkett-Smith before ending with Rock’s "hope that, with time, forgiveness can come of this situation and we can all be better, more considerate people in the end." 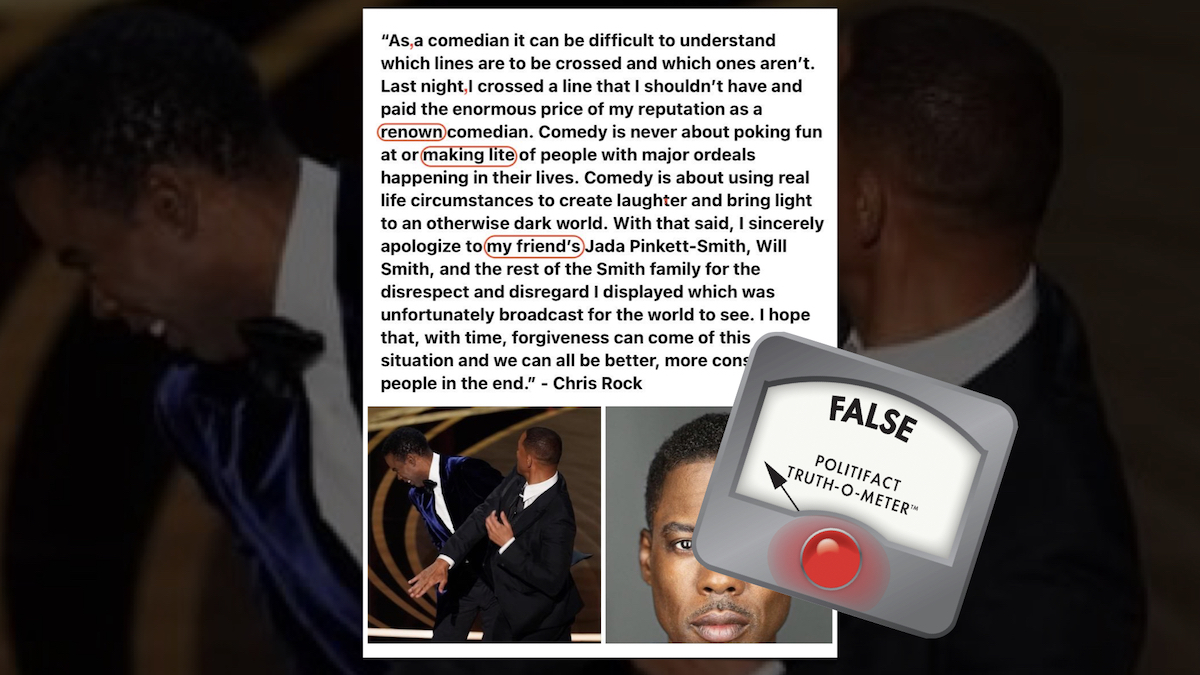 Rock’s alleged statement also made its rounds on Twitter. "This is Chris Rock's apology to Jada and Will Smith," read one tweet sharing the statement. "Obviously, he's the only Man in this debacle."
Though one of the celebrities involved in the incident did release an apology — it wasn’t Rock. The comedian’s Twitter, Facebook, Instagram and website were void of the alleged statement, with his last posts centered on an upcoming tour. And there have been no legitimate news stories reporting this development.
Smith, meanwhile, released a statement on March 28, publicly apologizing to Rock and others, describing his behavior as "unacceptable and inexcusable."
"I was out of line and I was wrong," Smith wrote.
Though Rock did not immediately respond to PolitiFact’s request for comment, Rebecca Keegan, an editor for The Hollywood Reporter, tweeted that his representatives denied crafting the statement.
PolitiFact found no news reports or credible evidence to support that the apology was authentic. We rate claims that Rock issued this statement regarding the incident False.

Charlie Crist
stated on July 14, 2022 a campaign ad:
Ron DeSantis "opposes any background checks on guns, even for violent criminals."

Val Demings
stated on July 13, 2022 a campaign ad:
Sen. Marco Rubio has "one of the worst attendance records in the Senate."

Ron DeSantis
stated on June 30, 2022 a press release:
The Civics Secures Democracy Act “would allow the Biden administration to buy off states with $6 billion” if they adopt critical race theory.

Marco Rubio
stated on May 25, 2022 an interview on CNN:
“There hasn't been a single of these mass shootings that have been purchased at a gun show or on the internet.”

Facebook posts
stated on May 17, 2022 a Facebook post:
“Florida Highway Patrol has a semi-truck … The FHP uses a fleet of three such ‘hidden in plain sight’ trucks to snitch on bad drivers.”