• The U.S. Food & Drug Administration advises against making homemade formula and says consuming it can result in adverse health effects for infants.

• The American Academy of Pediatrics also strongly advises against homemade formula, saying it isn't safe and does not meet babies’ nutritional needs.

The Facebook post makes it sound deceptively simple: To circumvent a nationwide shortage of baby formula, just make your own. But experts strongly disagree.

The May 11 post says people can follow a 1960 recipe for homemade baby formula as a workaround during the current shortage. It shows a photo of the recipe, with ingredients that include evaporated milk and Karo syrup.

The caption says, "Y’all, I felt this was pertinent information to share considering the shortages we are facing with our babies. I personally have not used this method yet but glad to have the details just in case!" 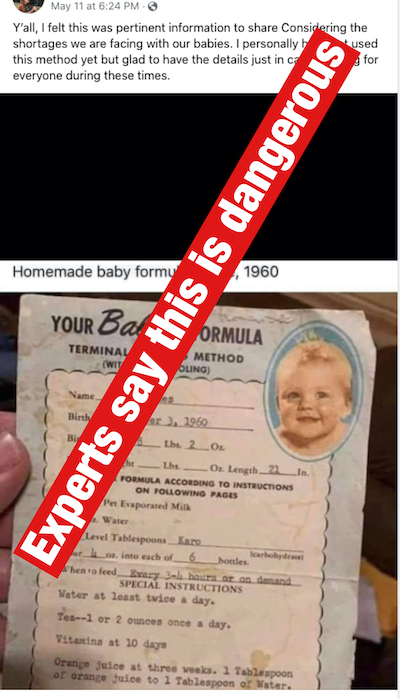 (Screenshot from Facebook)
Making baby formula is not as simple as it sounds, though. The U.S. Food & Drug Administration advises against it, and says consuming homemade formula can result in adverse health effects for infants.
The American Academy of Pediatrics also strongly advises against homemade formulas, saying they are not safe and do not meet babies’ nutritional needs.
The shortage of infant formula, attributed to COVID-19 related supply chain issues and a product recall that led to a temporary facility shutdown by a major formula manufacturer, has increased dramatically since the first half of 2021, with 40% of formulas now out of stock nationwide, The Atlantic reported. The White House recently announced steps intended to ease the shortage, including making it easier to import formula and cracking down on price gouging. The FDA is also expediting and streamlining some of its processes in an effort to address the shortage.
Following cases in 2021 of hospitalized infants suffering from low calcium after being fed homemade formula, the FDA reported that potential problems with homemade versions include contamination and inadequate amounts of critical nutrients.
"These problems are very serious, and the consequences range from severe nutritional imbalances to foodborne illnesses, both of which can be life-threatening," according to the agency.
Homemade formulas may not provide enough of some nutrients, or they can contain too-large quantities of others, which is equally dangerous. For example, homemade formula might have too much salt, which infants’ kidneys and livers cannot handle in large amounts, wrote Dr. Steven Abrams, chair of the National Committee on Nutrition for the American Academy of Pediatrics, in a May 9 blog post.
Commercial infant formulas, on the other hand, "are designed to mimic human breast milk as closely as possible, and are carefully regulated to make sure they have the nutrients growing babies need — in a form their bodies can process," the New York Times reported.
Regarding the 1960 recipe featured in the Facebook post, a pediatric gastroenterologist told CBS News DFW that our understanding of nutrition has evolved since that time.
"What worked or what they thought worked in the 1960s, we have much better scientific knowledge now to know that it can cause short-term harm, but most importantly, long-term harm for the baby," said Dr. Rina Sanghavi, of UT Southwestern Children's Health Dallas.
Our ruling

Healthychildren.org, "With the baby formula shortage, what should I do if I can't find any?" May 11, 2022

The Atlantic, "What’s Behind America’s Shocking Baby-Formula Shortage?" May 12, 2022

Instagram posts
stated on July 27, 2022 a video:
There is documentation of bull sharks in the Great Lakes.

Instagram posts
stated on July 31, 2022 a post:
“China threatens to shoot Nancy Pelosi’s plane down if she visits Taiwan.”

Facebook posts
stated on July 26, 2022 a post:
“Know what they always find in Alzheimer’s patients? Excessive aluminum in the brain. Know what makes your body hoard aluminum? Fluoride.”

The Gateway Pundit
stated on July 28, 2022 a post:
“Three doctors from the same hospital ‘die suddenly’ in the same week,” after the hospital mandated a fourth COVID-19 vaccine for employees.

Facebook posts
stated on July 15, 2022 a reel:
"To date, nobody has been able to show that there is a law for the average American citizen working day in and day out to pay an income tax."

Young America's Foundation
stated on June 13, 2022 a post:
A doctor at the Mayo Clinic is misdiagnosing pregnancies of Trump supporters so they have abortions.

Facebook posts
stated on June 12, 2022 a post:
"President Biden confirm(ed) everyone will receive their $1k gas checks this week!!"

Charlie Kirk
stated on May 23, 2022 a tweet:
The World Economic Forum has its own police force.

Facebook posts
stated on May 21, 2022 a post:
Suggests a January traffic accident involving lab monkeys was responsible for spreading monkeypox to humans.