Tweets
stated on May 26, 2022 in a tweet:
“These mass shootings happen so much that Ted Cruz really got a template ready to tweet whenever they occur.”

Offers of "thoughts and prayers" by U.S. elected officials after mass shootings are often received with criticism — with people claiming the messages are empty and void of any actionable response.

After the Uvalde, Texas, school shooting on May 24, some social media users accused Sen. Ted Cruz, R-Texas, of having a response template ready to go whenever a shooting occurs. At least 19 students and two teachers were killed at Robb Elementary School in Uvalde by a man named Salvador Ramos, authorities said.

"These mass shootings happen so much that Ted Cruz really got a template ready to tweet whenever they occur," a May 26 tweet said.

The tweet shows a wall of screenshots supposedly from Cruz’s Twitter account, with the most recent being about the Uvalde school shooting. Each tweet is almost exactly the same, with the exception of the location of the shooting, making it look as if  Cruz uses the same apologetic message for each tragedy. 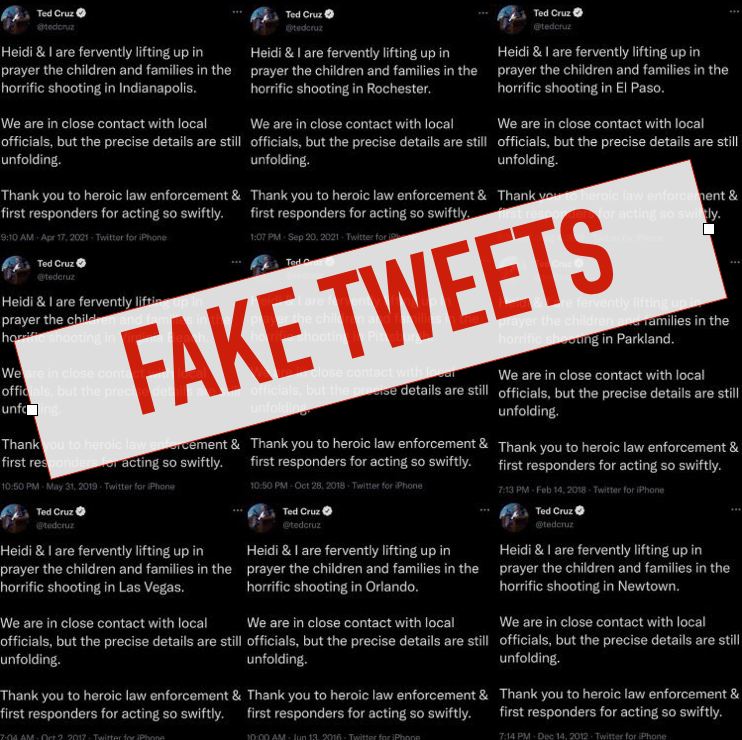 This claim is bogus. The tweet Cruz wrote on May 24 about the Uvalde shooting is real, but the rest of the images of the other tweets are fake.

Instagram posts
stated on November 8, 2022 in a post
“Many elections in Bexar are being called with 0% of precincts reporting! I smell MAJOR FRAUD!”

Heidi & I are fervently lifting up in prayer the children and families in the horrific shooting in Uvalde.

We are in close contact with local officials, but the precise details are still unfolding.

Thank you to heroic law enforcement & first responders for acting so swiftly.

A review of Cruz’s Twitter account shows that he has posted different messages following mass shootings. Many do follow similar patterns, with him and his wife offering prayers to the victims and their families, but the posts aren’t copied and pasted like the claim suggests.

Examples of some of his tweets:

On May 16, after a gunman killed 10 people at a supermarket in Buffalo, NY, Cruz wrote: "Heidi & I are praying for the families of the victims of the horrific shooting in Buffalo, NY. The killer must be prosecuted to the fullest extent of the law and brought to justice. The racism & antisemitism that purportedly motivated this killer have no place in America … I’m thankful there are heroes like security guard Aaron Salter, Jr.,  retired police officer, who fought back, and lost his life defending those around him."

On Aug. 3, 2019, after a shooter killed 23 people in a Walmart in El Paso, Texas, Cruz wrote: "My heart is with everyone in El Paso struck by this unspeakable evil. Heidi & I are praying for the victims & their families & are grateful for the first responders, local authorities & law enforcement working tirelessly to bring the perpetrator of this depraved act to justice."

On June 18, 2015, after a gunman killed nine people at a historic Black church in Charleston, South Carolina, Cruz wrote: ​​"My thoughts and prayers are with the families of the victims of last night's shooting in Charleston."