• Under a bill that all Senate Democrats voted for and that Biden signed into law, Medicare was permitted for the first time  to negotiate drug prices with manufacturers.

• On the government’s budget scorecard, this is projected to save up to $300 billion in federal outlays.

• But that reduction wouldn’t represent cuts to Medicare beneficiaries. Rather, by leveraging Medicare’s market power, the government would be able to pay less for certain prescription drugs, thus preserving the same level of benefits for less money.

It’s a staple of campaign season: Either Republicans or Democrats claim that the opposite party intends to slash Medicare, the federal health insurance program for Americans age 65 and older.

This theme has come up in Georgia’s Senate race, which pits Republican Herschel Walker against incumbent Democratic Sen. Raphael Warnock. 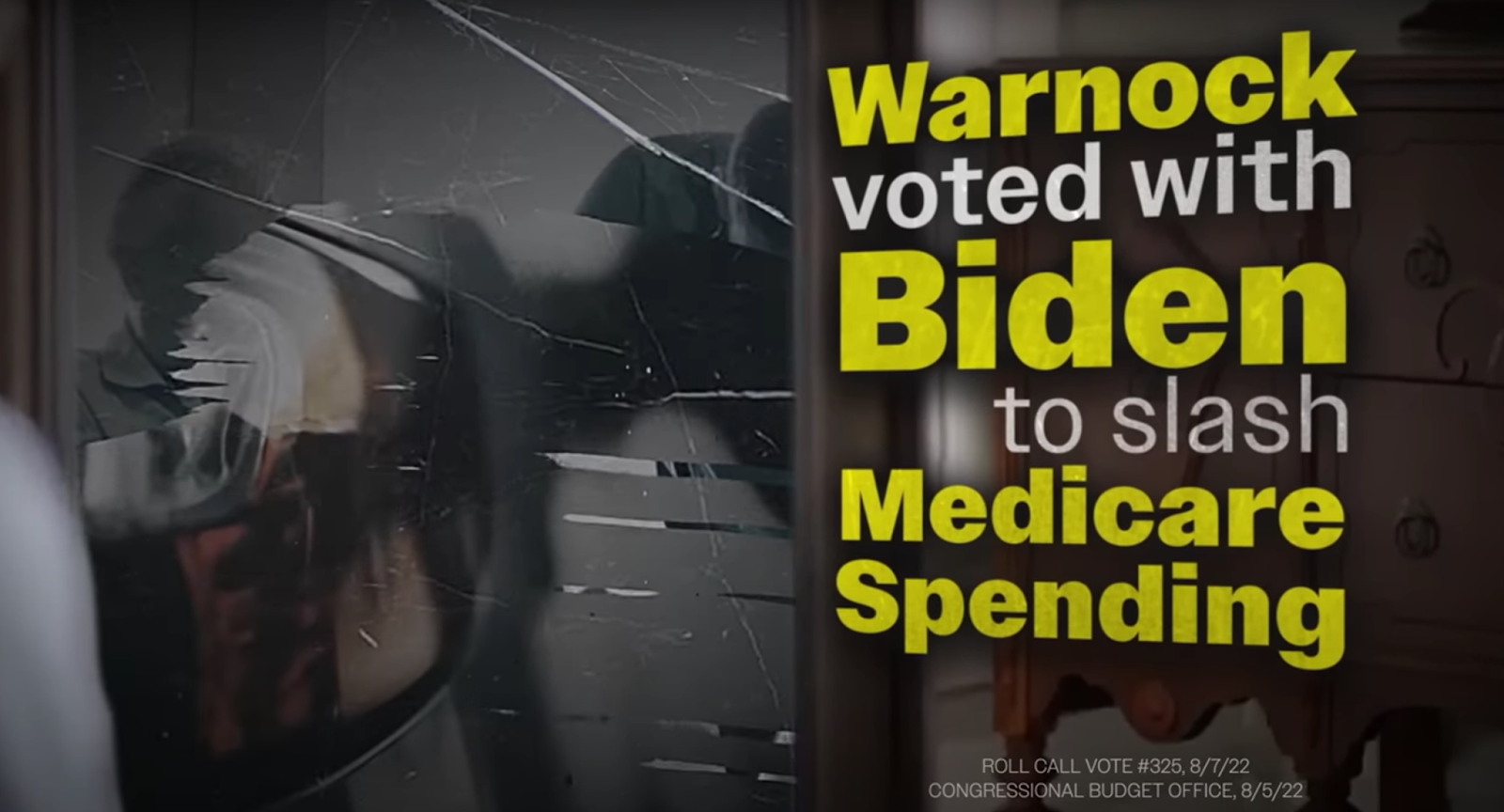 For starters, it’s a stretch to say "it didn’t take long" for Warnock to become a politician, since he spent most of his adult life as a preacher before winning his first bid for elected office at age 51.

As for two of the ad’s other assertions, we’ve previously concluded that Walker oversold the extent of anti-oil drilling policies undertaken by Biden, and found that Biden’s American Rescue Plan probably did exacerbate inflation, although multiple other factors were involved, too.

In this article, we’ll examine whether "Warnock voted with Biden to slash Medicare spending."

The National Republican Senatorial Committee did not respond to inquiries for this article. However, we recently looked at a similar statement and found the statement in this ad to be no more accurate. (Other outlets, including The Washington Post Fact Checker, CNN, and FactCheck.org have come to similar conclusions.)

Herschel Walker
stated on November 11, 2022 in an interview
Raphael Warnock "believes in no cash bail" and "letting people out of prison that are going to make us prisoners in our own home."

In the on-screen fine print, the ad cites Senate roll-call vote 325, which was the final vote to approve the Inflation Reduction Act, a Biden-backed bill that included provisions addressing climate change, the taxation of very large corporations, and Medicare drug pricing, among other topics. It passed both chambers with only Democratic votes, including Warnock’s, and it received Biden’s signature.

The $300 billion — technically, somewhere between $237 billion and $288 billion, depending on how the numbers are estimated — stems from a provision in the Democratic bill that would end the longstanding bar that kept Medicare from negotiating with drugmakers over the price of certain medicines. Not being able to negotiate prices has meant that Medicare — the pharmaceutical market’s biggest single buyer — could not leverage its weight to secure lower prices for taxpayers. This has been part of the reason pharmaceutical prices in the U.S. have been higher than any other major country.

Although the bill is projected to reduce federal spending by almost $300 billion, that would reflect government savings and not benefit cuts. In other words, Medicare recipients would receive the same amount of medicines, just for less taxpayer money.

"In reality, the bill's prescription drug savings would save the federal government nearly $300 billion through 2031 without cutting benefits," wrote the Committee for a Responsible Federal Budget, a group that favors deficit reduction and has been skeptical of many of Biden’s legislative efforts, citing their cost.

"Lowering Medicare costs is not the same as reducing benefits," the committee wrote. "Quite the opposite — many measures to reduce costs for the government would reduce costs for individuals as well."

After combining the drug-cost savings with the bill’s other health care provisions, Medicare beneficiaries would see decreases in premiums and out-of-pocket costs, including through a $2,000 annual cap on out-of-pocket costs, the committee projected. "In addition to saving the government nearly $300 billion, the (bill) would save American families nearly $300 billion more," the committee has projected.

Steve Ellis, president of Taxpayers for Common Sense, another group seeking to keep deficits low, told PolitiFact in August that the claims of Medicare cuts from this provision are problematic.

"Those are savings resulting mostly from the government negotiating prescription drug prices and limiting drug price increases to inflation," Ellis said. "So rather than taking money out of Medicare, it is reducing Medicare costs."

This claim is more than misleading. The federal government would see its outlays reduced by about $300 billion as a result of a Medicare drug-price negotiation provision. However, that reduction wouldn’t represent cuts to Medicare beneficiaries.

Rather, by leveraging Medicare’s market power, the government would be able to pay less to provide the same medicines, thus delivering the same level of benefits to people on Medicare.