Days after it was reported that classified documents were found in President Joe Biden’s office at a Washington, D.C., think tank and at his Delaware home, conservative commentators launched new allegations about him and his son, Hunter Biden.

"Hunter Biden paid his dad $50,000 a MONTH in rent for the home that housed classified documents… During the same time, Joe Biden only claimed less than $20,000 in rent payments PER YEAR!!!" read a Jan 17 Instagram post by Newsmax host Carl Higbie.

These posts are inaccurate and were flagged as part of Facebook’s efforts to combat false news and misinformation on its News Feed. (Read more about our partnership with Meta, which owns Facebook and Instagram.

The rumor took off after Carlson ran a segment on Jan. 16 about a newly surfaced background screening document that Hunter Biden purportedly filled out in July 2018 as part of an application for a rental property in California. It appears to contain some errors. 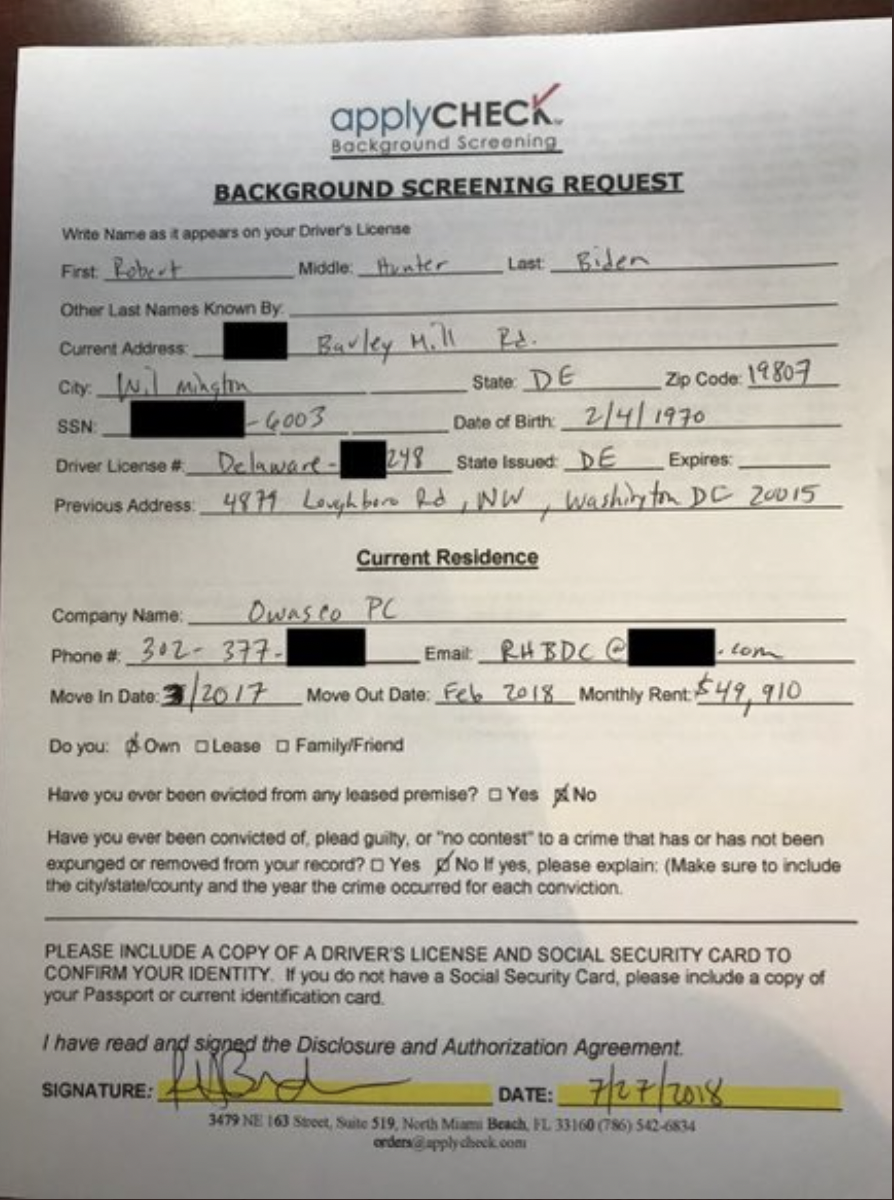 We couldn’t confirm whether it was Hunter Biden who filled out the form on July 27, 2018, but emails shared online by a former Trump White House aide suggest Hunter Biden’s former assistant completed the form for him. The date of an email titled "background app" matches the date the form was signed. It also follows a separate email Hunter Biden appears to have sent inquiring about a rental in California.

No matter who filled it out, the document does not show that Hunter Biden paid his father $50,000 in monthly rent to live at the family’s Wilmington, Delaware, home.

The figure in question — $49,910 — matches the quarterly rent for office space at the House of Sweden, home to the Swedish and Icelandic embassies on K Street in Washington, D.C. Business records show that an office for Rosemont Seneca Advisors, an investment firm Hunter Biden co-founded, was located there.

New York Post reporter Miranda Devine, who was one of the first to share the document online, made an updated post after rumors surfaced suggesting it showed rental payments to his father.

"Caution re wild speculation. This was for Hunter Biden’s application for an apartment in a hip Hollywood complex he was desperate to get into," Devine wrote on Twitter. "Big-noting by falsely claiming to own dad’s house in DE. The rent may refer to the $50k rent he paid for his office at House of Sweden."

Caution re wild speculation. This was for Hunter Biden’s application for an apartment in a hip Hollywood complex he was desperate to get into. Big-noting by falsely claiming to own dad’s house in DE. The rent may refer to the $50k rent he paid for his office at House of Sweden pic.twitter.com/5NhblYNSal

This is wrong. The figure refers to quarterly rent Hunter Biden paid for office space in Washington, D.C., a spokesperson for Sweden’s National Property Board confirmed.

Update, Jan. 23, 2023: This story has been updated to include confirmation from Sweden’s National Property Board on the lease dates for Hunter Biden's business.