Don't panic. Use your Truth-O-Meter.

Election Day is tomorrow. Don't panic. Your Truth-O-Meter is here to help.

It's been working hard all election season, which means that AJC PolitiFact Georgia can now present to you a roundup of some of our rulings on the governor's race.

Our findings aren't pretty. Experts told us the rivalry between Democrat Roy Barnes, a former governor, and Republican Nathan Deal, a former U.S. congressman, will go down as one of the ugliest in recent history.

The state's biggest congressional race, which is in the Macon area, also took a stroll through the mud. And the Atlanta area's toughest General Assembly race is in flames.

Brace yourselves. And don't forget your Truth-O-Meter.

Barnes: "I can put 10,000 people to work. Electricians, plumbers, sheet metal workers -- by retrofitting all of the state buildings for energy independence or efficiency."

Barnes made this striking claim in a TV ad, adding the energy cost savings would pay for the jobs. His campaign based its jobs estimate on two reports:

One by the state said such an initiative can create up to 5,000 new jobs and benefit about 6,000 people who are already employed. The second by a University of Massachusetts, Amherst research group estimates that each $1 million spent on energy-efficiency efforts creates about 20 jobs.

The state estimate for retrofitting costs exceeds the number the university calculates needs to be spent to put 10,000 people to work. And since state officials estimate that retrofitting can save as much as $67.5 million in a single year, it could pay for itself over time.

But Barnes gave the impression that all of these workers would be new hires and they'd start work quickly. That wouldn't happen.

This election season, illegal immigrants are some of the Republicans' favorite bad guys.

Now a Republican Governors Association attack on Roy Barnes says he fought to give them the right to vote.

The RGA's proof is that Barnes, an attorney, unsuccessfully filed suit against Georgia's 2006 voter ID law. If the challenge won, state law would have let voters use bank statements as ID. Since Barnes served on the board of Georgia Appleseed, a nonprofit the RGA said helped illegal immigrants get bank accounts without Social Security numbers, he'd be helping illegal immigrants vote, the RGA claimed.

But experts called the RGA's characterization of Barnes' suit "outrageous" and a "misrepresentation."

And Georgia Appleseed doesn't aid illegal immigrants. It fixes systemic legal problems. It did run a financial literacy initiative for Latino immigrants. But a noncitizen is a far cry from a person who crossed the border illegally.

In a recent RGA ad, two gray-haired men sit around a table with a red-and-white checkerboard tablecloth, saying Georgia suffered when Roy Barnes was governor.

One says Barnes "made Georgia last, dead last, in education." And "Georgia led the nation in job losses."

On the education claim, an RGA spokesman pointed to average SAT scores and a Manhattan Institute report published in 2001 that found Georgia had the lowest high school graduation rate of any state. The report, however, was about students who graduated the year before Barnes took office. Other graduation rate data placed Georgia near the bottom or tied for last.

In 2002 Georgia ranked last in the SATs, but experts said making state-to-state comparisons is a bad idea.

On the job-loss front, a front-page 2001 article in The Atlanta Journal-Constitution reported that Georgia lost nearly 80,000 jobs during a 12-month stretch, more than any other state.

Birthers think that President Barack Obama isn't a "natural-born citizen" and therefore doesn't qualify for his job. They also think his Hawaii birth certificate is bogus. Their ideas have been widely discredited as conspiracy theories.

Nathan Deal, a former U.S congressman and the Republican candidate for governor, publicly expressed doubts about Obama's birth certificate and sent a letter to the president asking for a birth certificate "or other documentary evidence" that his constituents could view. He did this even though the birth certificate had been repeatedly reviewed by journalists. Copies and photographs have been readily available on the Web since 2008.

Birthers hailed Deal's letter as a victory for their cause, but it wasn't clear that it was. The letter wasn't released until AJC PolitiFact Georgia asked for it.

It said: "I accept your assurance you meet that [citizenship] requirement, and in no way intend to show anything but respect for the Office of President and for you personally."

Deal's no birther, but he did head down the birther path. We rate this statement Mostly True.


Flip-O-Meter:  Deal:  On bringing casino gambling and other gaming to Georgia

Deal's recent statements on gambling made some conservatives cringe.

During an Aug. 18 forum on tourism in Savannah, Deal said the state should keep an "open mind" about gambling.

Days later, Deal told a television reporter that he didn't "favor it on a personal basis. I just don"t think you can gamble yourself out of a bad economy."

We reviewed his statements and voting record and talked to his campaign spokesman. During the forum, Deal stopped short of endorsing casinos, but did say there are benefits to them and he supports looking into them in detail.

Since the controversy, Deal has shifted what he says on gambling. He's no longer using the phrase "open mind." He has not mentioned studying the pros and cons of gambling, either. Plus, a Deal spokesman told AJC PolitiFact Georgia that he would support gubernatorial appointments who do not favor gambling expansion.

We gave Deal a Half Flip.

It's the most incendiary TV ad in the race for governor so far.

"It was my niece. If Nathan Deal had won his fight to weaken the rape shield law, and my niece took the stand, she would have been forced to defend what she wore and that she didn"t deserve to be raped," a woman's voice says.

In 1991, Deal, then second in command in the state Senate, introduced a bill that would overhaul the state's rules of evidence. This included making changes to the rape shield that gave the defense leeway that didn't exist in state law or federal rules.

Deal pursued the change until public protest reached a fevered pitch. And while he didn't fight to help rapists or hurt victims, he invested his considerable political capital on behalf of a bill that would have weakened the rape shield act.

Republicans made this accusation in a recorded message that went out Aug. 10 to voters across U.S. Rep. Jim Marshall's district. It said Rangel, who is in a heap of ethics trouble, made $37,000 in campaign contributions to Marshall.

The message called for Marshall to give the money back.

But that money arrived before Rangel's ethics problems. All of the contributions were made by 2007, a year before the ethics allegations surfaced. Marshall has since refused to accept contributions from Rangel or the PAC, the spokesman said.

We ruled the Republicans' statement Half True because it takes some things out of context and leaves out important details.

Your stimulus money is being shanghaied, Republicans are saying. Literally, it's going to China.

And credit belongs in part to Marshall, according to a TV commercial released Oct. 5 by Scott that contains the above claim.

Marshall and Scott are in one of the state's toughest races. Similar accusations about China and wind power are haunting Democratic congressmen across the country who voted for the American Reinvestment and Recovery Act of 2009, otherwise known as the stimulus bill.

While green-energy grants did end up in the hands of foreign companies, the situation is far from what Scott's commercial claimed. China had barely any role in this issue.

The $2 billion figure is old and incorrect. Even critics agree that money is staying in the country in the form of domestic construction and manufacturing jobs, though the amount is unclear and most jobs are short-term.

On the race for state House District 81, north DeKalb County

Even among this election season's accusations of dastardly deeds, an attack in a local state House race stands out.

A recorded telephone message recently told voters that Democrat Elena Parent is taking "over $22,000 intended for our schoolchildren in campaign contributions from a law firm representing the corrupt DeKalb school board."

Yes, corruption accusations are rocking DeKalb schools. Sutherland Asbill & Brennan, the firm to which the ad refers, does work for them. The donation amount is correct.

But those contributions come from Sutherland employees, not the firm. No DeKalb school board member was named in the corruption.

Plus, saying campaign contributions to Parent came from money intended for schoolchildren tests the bounds of logic.

Using Chambers' reasoning, if a Sutherland lawyer bought a candy bar at a Wal-Mart, you could accuse the retailer of taking money intended for students.

We rule Chambers' accusation as Pants on Fire.

If you believe her rival, Chambers is the candidate of your nightmares.

She "sold out our families," according to a mailer from Parent. The Republican lets businesses "prey on consumers."

At AJC PolitiFact, the burden of proof rests on the accuser. Parent has not proved Chambers exaggerated the amount of work she performed while the Legislature was out of session.

Furthermore, the accusations are misleading. Parent suggests Chambers is wasteful or dodging the rules. But her actual reported expenses in recent years have been less than half of what is allowed by law. Her per diem is set by state statute, and the days she claimed dropped when she could have used the cash (she filed for bankruptcy in October).

Given the flimsy backing to Parent's claim, by her rules, you could say any legislator "profits" from her work if she claims per diem and mileage.

"I can put 10,000 people to work. Electricians, plumbers, sheet metal workers -- by retrofitting all of the state buildings for energy independence or efficiency."
— Roy Barnes, Wednesday, June 23rd, 2010. 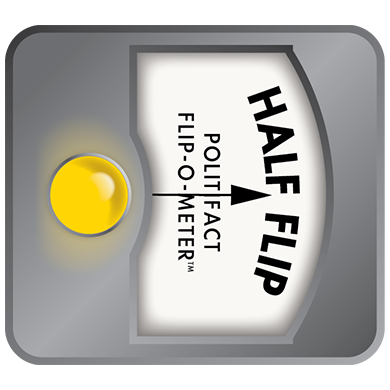 Keep up to date with PolitiFact Georgia