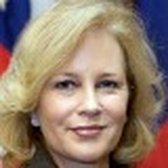 Anita Perry became the First Lady of Texas when her husband, Rick, became governor in late 2000. According to a biographical post on the governor's website, she is dedicated to improving the health of her state, preserving its culture and promoting its business climate. Her husband didn't seek re-election in 2014.