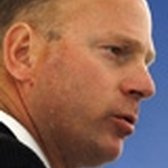 Bill Janis, a Republican, served in the Virginia House of Delegates from 2002 to 2012, representing the 56th District, which covers an area west of Richmond including parts of Henrico, Goochland and Louisa counties. He was the Majority Whip beginning in 2011. Following his term in the house, he was deputy commissioner at the Virginia Department of Veterans Services. He then became corporat counsel for HealthcarePays, a national healthcare payment network. He graduated from Virginia Military Institute, Lexington, in 1984, and the University of Virginia School of Law in 1999. He served in the U.S. Navy from 1984 to 1995.