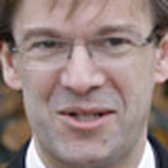 Chris Abele is Milwaukee County Executive, a position he won in an April 2011 special election to finish out the final year of the term of Scott Walker, who was elected governor in November 2010. The election was the first attempt at political office for Abele, a Milwaukee philanthropist and business owner. The office is nonpartisan, but Abele has indicated he is a Democrat.