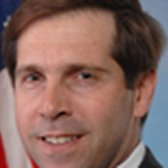 From Ooltewah near Chattanooga, Fleischmann is a Univeristy of Tennessee law school graduate who established a law firm, Fleischmann and Fleischmann, with his wife Brenda. They have three sons. He was elected in 2010 after longtime incumbent Zach Wamp chose to run for governor, and won the 2012 GOP primary despite vigorous opposition from dairy industry magnate Scotty Mayfield and Weston Wamp, the son of the former Congressman.