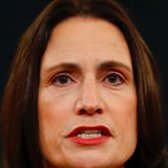 Fiona Hill joined the National Intelligence Council, an office that produces reports for the intelligence community, in 2006, focusing on Russia and Eurasia. She joined the Brookings Institution, a centrist to left-of-center think tank, in 2009. While there, she co-authored the book "Mr. Putin: Operative in the Kremlin" in 2013. During the Trump administration, Hill served as a top National Security Council expert on Russia and Europe, supervising previous impeachment witness Lt. Col. Alexander Vindman. She left her post in the summer of 2019 and was succeeded in that post by another impeachment witness, Tim Morrison, before he resigned the NSC post in October.