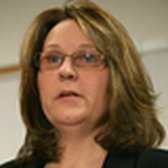 Kathy Nickolaus is the Waukesha County clerk, a partisan post that oversees elections. She was first elected in November 2002 after winning a Republican primary. She was re-elected in 2004, 2006 and 2008 without opposition, when state law was changed and made the term four years Nickolaus has had a long career in Republican politics. In the 1990s, she worked as a staffer for the Assembly Republican caucus.