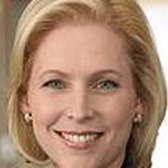 Kirsten Gillibrand is a senator from New York. Gillibrand was appointed as senator in 2009 to fill Hillary Clinton’s vacated seat, as Clinton became U.S. Secretary of State under Barack Obama. Gillibrand won a special election in 2010 to retain her senate seat and won re-elections in 2012 and 2018. From 2007 to 2009, she served as the representative of New York’s 20th Congressional District. Gillibrand received a bachelor’s degree in Asian Studies from Dartmouth College and a J.D. from UCLA School of Law. In 2019, she ran for the Democratic nomination for president and dropped out in August.