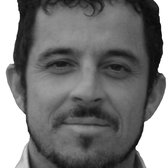 Mario Loyola is a Senior Fellow at the Texas Public Policy Foundation. Loyola joined the Foundation in July 2010 as founding director of the Center for Tenth Amendment Action, focusing on energy and environment, healthcare, and other federalism issues. He began his career in corporate law. Since 2003, he has focused on public policy, dividing his time between government service and research and writing at prominent policy institutes. He served in the Pentagon as a special assistant to the Under Secretary of Defense for Policy, and on Capitol Hill as counsel for foreign and defense affairs to the U.S. Senate Republican Policy Committee.