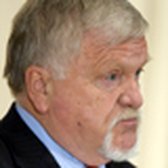 Tom Hughes was elected president of Metro, the Portland area's regional government, in 2010. He served two terms as mayor of Hillsboro. He was first elected to office in 1976, winning a spot on the Hillsboro City Council that he held until 2000. He served on Hillsboro’s Planning and Zoning Hearings Board and was appointed to the Hillsboro Planning Commission. He was elected mayor in 2001. He also was a high school teacher for many years.