Will "support doubling federal funding for basic research over ten years, changing the posture of our federal government...to one that embraces science and technology. This will foster home-grown innovation, help ensure the competitiveness of US technology-based businesses, and ensure that 21st century jobs can and will grow in America."

Part of candidate Barack Obama's message of hope was he would unlock the power of science to cure disease, generate clean energy, create new jobs and otherwise put the country on an upward path.

In 2007, a year before the election, he unveiled his plan which included a pledge to "support doubling federal funding for basic research over 10 years."

Dollars for basic research come through many agencies, but the big ones are the National Institutes of Health, the National Science Foundation, and the departments of Energy, Defense and Agriculture.

There have been 10 fiscal years since Obama made his promise. We looked at the period from 2007 to 2016 and checked the results using different combinations of agencies and definitions of research.

Under no scenario did basic research double.

The chart below shows the budget trends for basic research across all the agencies, using the American Association for the Advancement of Science record of research spending. 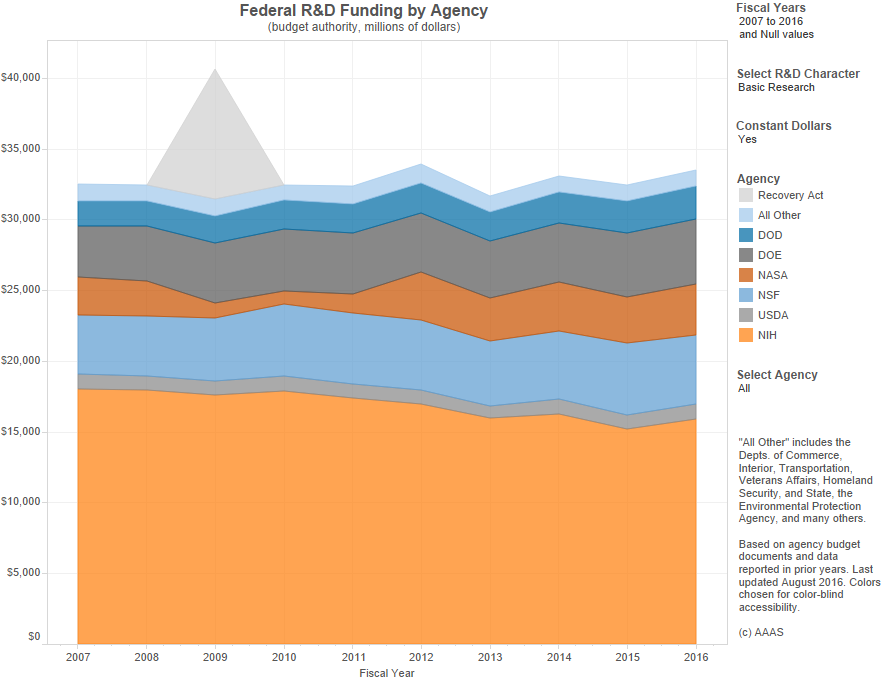 Except for the 2009 bump from the economic stimulus package, by and large, budgets have held steady.

The drive to reduce the deficit basically put this promise out of reach, said Matthew Hourihan, who oversees the research and development budget and policy program for the American Association for the Advancement of Science.

"A 10-year doubling would have required annual increases of 8 percent for each of these agencies," Hourihan said. "In most years, the administration did not ask for anywhere near this increase. Certainly not for the National Institutes of Health or the Office of Science. They did regularly seek funding boosts for the big three basic research agencies, but usually not enough to put the agencies on a 10-year doubling path."

On this promise, the numbers speak for themselves. Obama said he would push to double basic research spending, and it largely held steady. We rate this Promise Broken.

American Association for the Advancement of Science, Federal R&D in the FY 2016 Budget: An Overview, Oct. 18, 2016

Certainly no one is happy that the U.S. economy is in such dire straits that policymakers are talking about a stimulus plan that could cost more than $500 billion. But an unintended benefit for Barack Obama is that the bill gives him a chance to make good on a number of his more expensive campaign promises.

Obama discussed the broad outline of his hopes for the bill in a speech at George Mason University on Jan. 8, 2009.

"It is not just another public-works program," Obama said. "It's a plan that recognizes both the paradox and the promise of this moment — the fact that there are millions of Americans trying to find work even as all around the country there's so much work to be done. That's why we'll invest in priorities like energy and education; health care and a new infrastructure that are necessary to keep us strong and competitive in the 21st century."

Democrats in the U.S. House released a broad outline of what they hope to include in the 2009 stimulus bill and it contained many ideas Obama promised during the campaign, including a big chunk for basic research.

We're not sure how far the new proposal goes toward doubling federal funding for basic research. But it directs $10 billion toward science, including $2.5 billion for basic research. That's a start. And it's enough for us to move the Obameter from No Action to In the Works.