Will "create 5 million 'green' jobs; will invest $150 billion over ten years to deploy clean technologies, protect our existing manufacturing base and create millions of new jobs."

During his 2008 campaign, President Obama promised to "create 5 million 'green' jobs." Back in 2012, we rated this In the Works because while the promise has a 10-year window, the funding had all but disappeared.

Since then, the number of "green" jobs has increased, but it's hard to say if it will reach 5 million.

According to the Bureau of Labor Statistics, "green" jobs have a broad definition. They include:

• Jobs in businesses that produce goods or provide services that benefit the environment or conserve natural resources;

• and jobs in which workers' duties involve making their establishment's production processes more environmentally friendly or use fewer natural resources.

This broad definition makes it difficult to count the exact number of "green" jobs. In addition, the federal government did not start tracking of the number of "green" jobs until 2010, and the Bureau of Labor Statistics discontinued all "measuring green jobs" products in 2013 because of the Balanced Budget and Emergency Deficit Control Act.

However, as of March 2016 there were 2.5 million jobs in clean energy alone, according to the nonpartisan group Environmental Entrepreneurs, with about 77,088 jobs solely in the wind industry.

Solar power jobs doubled in the past five years, according to the independent Solar Foundation, a nonprofit promoting solar energy. 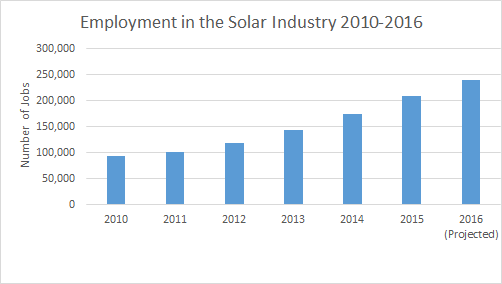 Also last year, the number of jobs in the solar industry overtook those in oil and natural gas extraction for the first time, Bloomberg reported.

This growth in clean jobs is caused in part by the Business Energy Investment Tax Credit (ITC), and the Renewable Electricity Production Tax Credit (PTC) — both of which were extended in December 2015.

Plus, there are other reasons clean jobs could be on rise, said Severin Borenstein, a research associate of the Energy Institute at Hass and former director of the University of California Energy Institute.

"Probably two of the most important are that many states have expanded their Renewable Portfolio Standards, requiring more renewable power, and creating more jobs in that sector," Borenstein said. "The other reason is that the real cost of wind and solar power have come down dramatically during the Obama administration, making them more attractive investments."

He added that because "green" jobs have such a broad definition, they would have increased along with the general employment rate.

Obama promised to "create 5 million 'green' jobs." He did extend tax credits, and the demand for renewable power increased as the cost to make it decreased. But since the Bureau of Labor Statistics stopped counting "green" jobs in 2013, and there was no baseline to begin with, we can't know for certain the exact number created during Obama's time in office. We rate this Compromise.

Email interview with Severin Borenstein, research associate of the Energy Institute at Hass and former director of the University of California Energy Institute, Oct. 27, 2016

Rewind four years ago to the presidential campaign and you'll recall that An Inconvenient Truth, a documentary about climate change, was fresh in the minds of many Democrats.

As a candidate Barack Obama pledged to enact a market-based cap-and-trade carbon-emissions system designed to reduce air pollution. Obama envisioned the government auctioning off carbon-emission permits for a set price per metric ton of a greenhouse gas such as carbon dioxide.

Under Obama's plan, auctioning revenue would hand the president an extra $15 billion per year, which he would invest in clean-energy technology and -- voila! Five million new jobs in the clean-energy sector in the next 10 years.

Despite the president's support for cap and trade, the bill stalled in Congress. That means the main pot of money intended to create Obama's 5 million green jobs -- $150 billion over 10 years -- doesn't exist.

Obama would have another problem in meeting his original green jobs promise -- it would be difficult to prove he achieved it.

That's because the federal government didn't count green jobs until this year. But two years ago, Congress appropriated money for the Bureau of Labor Statistics to survey businesses and establish a baseline number. The bureau says the U.S. had an estimated 3.1 million jobs related to green goods and services in 2010. Later this year we'll learn how many green jobs existed in 2011. But we do not know how many comparable green jobs existed in 2009 or in the pre-Obama years.

Economists from the Brookings Institution, a nonpartisan policy research group, made their own definition of a green job and calculated seven years' worth of historical data from 2003 to 2010. They estimate the U.S. economy had 2.1 million green jobs in 2003 and 2.7 million in 2010.

"Green job growth has increased during the Obama Administration, and green jobs have grown faster than jobs in all sectors,” said Jonathan Rothwell, one of the Brookings researchers who wrote the report.

But Rothwell cautioned against assuming those new jobs were the result of Obama policies. He noted that few of the jobs added -- about 17 percent of the roughly 211,000 new jobs in 2009 and 2010, were in the clean-technology areas targeted by the Obama administration.

"The stimulus bill and Obama administration budgets have certainly increased spending on green activities, and that spending has created jobs,” Rothwell said. "Whether or not Obama administration policies have been effective or worthwhile investments of tax dollars very much depends on the program, how it was designed and implemented, and how the companies fare going forward.”

The last point we should address is the timeline. It is true that Obama's promise came with a 10-year deadline. Theoretically, he could win reelection, find a source of revenue to fund green job growth and still meet that goal. Nonetheless, the key to his green-job creation plan -- a cap-and-trade law -- has no prospects of passing in 2012. Even if he wins reelection, he is likely to face ongoing opposition by Republicans in Congress, making a landmark law on climate change improbable.

The near future looks bleak for Obama's green jobs promise, but since he gave himself a 10-year window, we'll leave this promise In the Works for now.

Interview with Kate Gordon, senior fellow at the Center for American Progress and director of the advanced energy and sustainability program at The Center for the Next Generation, Sept. 12, 2012

Interview with Donald Haughton, economist at the U.S. Bureau of Labor Statistics, Aug. 27, 2012

Center for American Progress, Cap and trade 101: What is cap and trade, and how can we implement it successfully?, Jan. 16, 2008

WhiteHouse.gov, The economic impact of the American Recovery and Reinvestment Act of 2009,  Supplement to the third quarterly report: the ARRA and the clean energy transformation

The Washington Post, Push to reduce greenhouse gases would put a price on emitting pollution, March 13, 2009

Throughout his 2008 presidential campaign Barack Obama promised to create 5 million "green” jobs to both mitigate unemployment and boost the nascent clean energy sector. "We'll invest $15 billion a year over the next decade in renewable energy, creating five million new green jobs that pay well, can't be outsourced and help end our dependence on foreign oil," Obama said during the fall of 2008.

Did the seed planted by the American Recovery and Investment Act germinate into a field of greens?

First, we should clarify what is meant by "green jobs.” Perhaps the best definitions come from the Bureau of Labor Statistics (BLS). In December 2009, President Obama signed the 2010 Consolidated Appropriations Act, which appropriated $8 million to the BLS to use to determine the number of green jobs in the United States. The BLS will release two surveys of this data in 2012. The BLS uses two definitions for "green” jobs -- one for each survey:

• Jobs in businesses that produce goods or provide services that benefit the environment or conserve natural resources.

Until the BLS completes these surveys, the exact number of newly created green jobs is open to debate. The Council of Economic Advisers -- which advises the president on economic matters --claims that 225,000 green jobs have been saved or created through the first nine months of 2010. This was accomplished through an $80 billion injection from the stimulus. The White House further predicts that 825,000 green jobs will be filled by the end of President Obama"s current term in office. Both numbers, however, are estimates.

Even if the 225,000 number is accurate, it's clear that President Obama has a long way to go in fulfilling his pledge to create 5 million green jobs. June 2011 employment data evinces the difficulty in fulfilling this pledge -- with anemic job growth of 18,000 and a rise in the unemployment rate to 9.2 percent. Furthermore, with political debate focused on cutting expenditures, future government investment in such programs appears unlikely.

Finally, it's fair to say that Obama didn"t predict the severe economic downturn of recent years when he made his promise. That downturn is slowing down all job growth, including green jobs, said Robert Greenstein, president of the left-leaning Center on Budget and Policy Priorities. "Any job creation target espoused in 2008 was made at a time when no one expected the economy would suffer such a deep financial and economic crisis and have unemployment so high and job creation so low for such an extended period,” Greenstein said. "So any job creation goal is going to be hard to reach, regardless of how effective the policies in question may be, until the economy has a much stronger recovery.”

Hard numbers are difficult to come by until the BLS releases its green jobs study next year. It's entirely possible that the 5 million or more green jobs may be created within a decade once the national economy recovers. As of yet, there is simply not enough data to accurately gauge the progress in green job growth. Because of this, we continue to rate this promise as In the Works.

E-mail interview with Robert Greenstein, president of the Center on Budget and Policy Priorities.

This is a long-term promise and we are only in the third month of the Obama presidency, but there's plenty of "green job" stuff in both the economic stimulus package signed by Obama in February as well as in the administration's proposed 2010 budget, enough that we wanted to acknowledge the progress made toward this promise.

There's also $6 billion in the stimulus to modernize the nation's electricity grid; as well as hundreds of millions for research into renewable energy technologies like biomass and geothermal.

* Support for the plan to modernize the nation's electric grid.

It's too early to say how many green jobs all of this will translate into. Suffice to say a lot. Five million? Time will tell. But there's enough in these two plans to move this to In the Works.

Office of Budget and Management, Budget Documents for Fiscal Year 2010

American Recovery and Reinvestment Act of 2009

Department of Energy, Overview of the American Recovery and Reinvestment Act of 2009 (Recovery Act)