"A hiring freeze on all federal employees to reduce federal workforce through attrition (exempting military, public safety, and public health)."

Shortly after taking office, President Donald Trump took a significant step toward fulfilling his campaign promise to impose "a hiring freeze on all federal employees to reduce (the) federal workforce through attrition," exempting military, public safety, and public health positions.

Trump imposed a freeze, but in April, his budget director, Mick Mulvaney, released a memo to the heads of executive departments and agencies. Mulvaney said during a press briefing April 11 that the administration would be replacing the initial freeze "with a smarter plan, a more strategic plan, a more surgical plan." The lifted ban, he said, "does not mean that the agencies will be free to hire willy-nilly."

Now, roughly nine months later, there is no indication that a broad-based hiring freeze is on tap, the White House told PolitiFact, though some agencies may be continuing to operate under an informal hiring freeze.

Data from the federal Office of Personnel Management suggests that beyond the areas exempted in Trump's campaign promise -- namely military, public safety, and public health positions -- recent hiring trends in cabinet-level agencies have been mixed.

The departments of Justice, Labor, Energy, Education, Housing and Urban Development, State, Transportation, and Treasury have all seen declines in employment over the past four quarters, though the decreases have generally been modest. 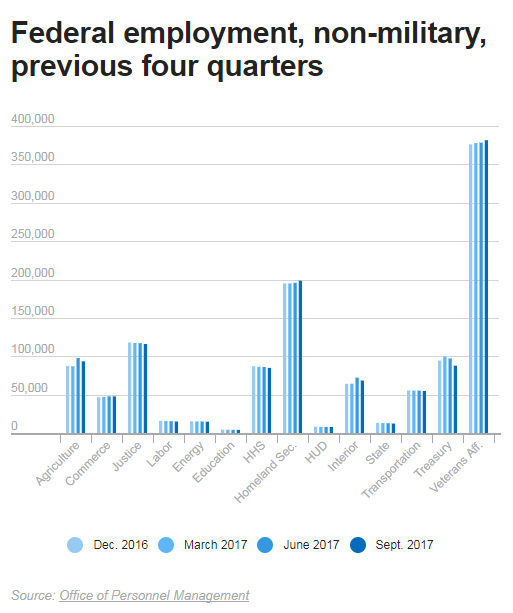 Overall, the federal workforce hasn't grown or shrunk much at all since Trump has been in office, according to Office of Personnel Management figures: 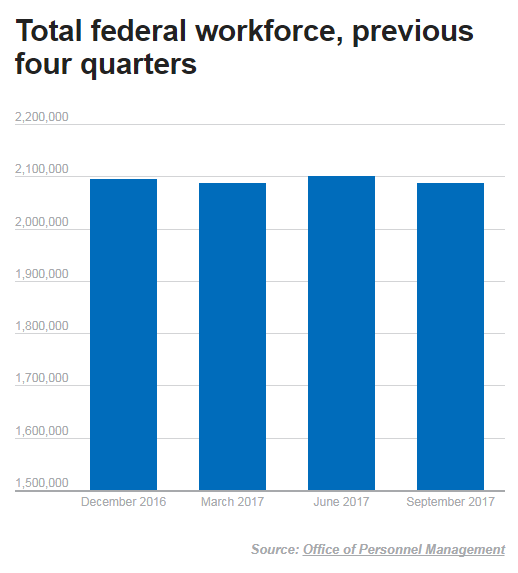 Trump's promise -- to use attrition to shrink the federal workforce -- isn't currently enforced by a formal order, and there is little evidence that the number of federal workers is shrinking noticeably. We rate this promise Stalled.

A federal hiring freeze imposed during the first days of President Donald Trump's administration has been lifted, allowing departments and agencies to hire again but under new directives.

The hiring freeze was expected to be lifted this month after the director of the White House Office of Management and Budget recommended a plan to reduce the size of the federal workforce through attrition.

Trump's budget director, Mick Mulvaney, on April 12 issued a memo to the heads of executive departments and agencies outlining a plan to reform the federal government and reduce the federal civilian workforce.

"What we're doing tomorrow is replacing the across-the-board hiring freeze that we put into place on day one in office, and replacing it with a smarter plan, a more strategic plan, a more surgical plan," Mulvaney said during a press briefing April 11.

The lifted ban "does not mean that the agencies will be free to hire willy-nilly," Mulvaney said.

Guided by Trump's priorities, some agencies will end up hiring more people and others will cut the size of their workforce, Mulvaney said. For instance, given proposed budget cuts to the Environmental Protection Agency, that agency will likely have to trim its size, while the Defense Department may increase its staffing, he said.

Reuters reported on April 13 that the hiring freeze remained in place for the State Department, "until the plan to downsize and reorganize had been fully developed."

Mulvaney's memo directs agencies to submit an Agency Reform Plan in September 2017 that details long-term workforce reductions. A draft is due by the end of June 2017.

Pending the submission of plans and the reduction of federal jobs through attrition, we continue to rate this promise In the Works.

Trump signed the order on his first full weekday in office, making good on one of Trump's key pledges included in his 100-day action plan, the "Contract with the American Voter." The contract outlines steps to "clean up corruption and special interest collusion in Washington D.C." as well as ways to reduce the scope of the federal government.

The memorandum, sent to the heads of executive departments and agencies, reads:

"By the authority vested in me as President by the Constitution and the laws of the United States of America, I hereby order a freeze on the hiring of Federal civilian employees to be applied across the board in the executive branch. As part of this freeze, no vacant positions existing at noon on January 22, 2017, may be filled and no new positions may be created, except in limited circumstances."

The order primarily applies to executive branch civilian employees, which numbered more than 1.3 million in 2014, according to the Office of Personnel Management.

On April 22, 2017, or 90 days after the memorandum's effective date, the director of the Office of Management and Budget will "recommend a long-term plan to reduce the size of the Federal Government's workforce through attrition," at which point the hiring freeze will end, according to Trump's directive.

This order does not affect Trump's appointments to his Cabinet, along with the national security, public safety and military personnel.

"Some people are working two, three jobs just to get by," Spicer said in a Jan. 23 press briefing. "And to see money get wasted in Washington on a job that is duplicative is insulting to the hard work that they do to pay their taxes."

Trump is not the first president to enact across-the-board hiring freezes. Democrat Jimmy Carter and Republican Ronald Reagan were the last presidents to impose similar orders.

In 1982, the Government Accountability Office examined hiring freezes imposed by the former presidents and concluded the actions were not effective at controlling government costs. The report said the freezes "had little effect on Federal employment levels, and it is not known whether they saved money."

While Trump has made progress by issuing the order, the real measure of success for this pledge will come down to how much he is able to reduce the scope of the government through attrition. For that reason, we rate this promise In the Works.