Grow the economy by 4 percent a year

“We're bringing it (the GDP) from 1 percent up to 4 percent. And I actually think we can go higher than 4 percent. I think you can go to 5 percent or 6 percent.”

As a presidential candidate, Donald Trump promised to secure 4% growth for the national economy. But he hasn't succeeded, even before the coronavirus pandemic sent the economy into a recession.

Here's a chart of year-over-year growth in inflation-adjusted gross domestic product. It shows that the economy didn't hit an annual 4% increase in any of Trump's three completed years in office. The periods under Trump are shown in red, while the periods in blue were under his predecessor, Barack Obama. 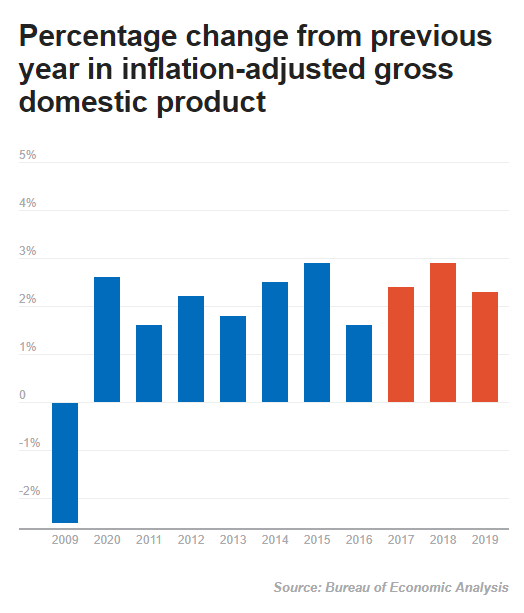 In addition, the economy didn't even hit the 4% mark in any single quarter under Trump. This chart shows the annualized quarterly growth in U.S. GDP. 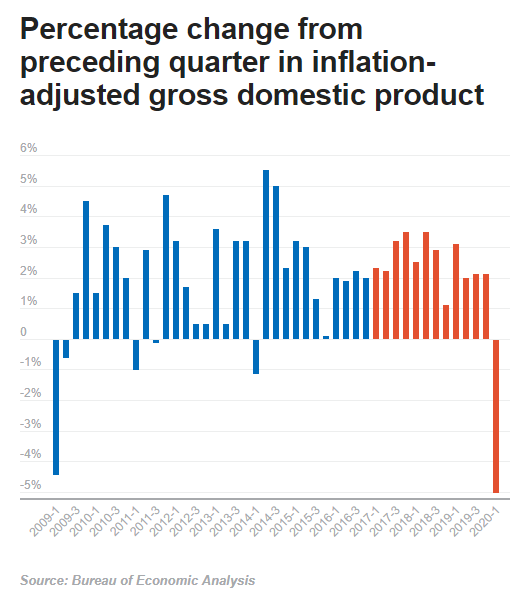 This chart shows that growth in any quarter maxed out at 3.5%, on two occasions.

Meanwhile, the onset of the pandemic-driven recession "means the president will not achieve his goal of 4% growth" by the end of his first four years, Burtless said.

"Even if there is a quick turnaround in the second half of the year, something that is now viewed by many economic forecasters as unlikely, few economists would give the administration much credit for a quarter or two of 4%-per-year growth if GDP remains substantially below its level in the 4th quarter of 2019," Burtless said.

We'll also mention our usual disclaimer: Presidents are not all-powerful on the economy, so they don't deserve too much credit or blame for the economic performance on their watch.

President Donald Trump's promise to grow the economy by 4 percent a year did not come through in 2017, although the economy did see a 4.1 percent boost in the second quarter of 2018.

The gross domestic product, a broad measure of the national economy, grew 2.3 percent in 2017, better than the 1.5 percent growth in 2016 but lower than the 2.9 percent increase in 2015, according to data from the Department of Commerce's Bureau of Economic Analysis.

The bureau's advance estimates showed a 4.1 percent real GDP growth in the second quarter of 2018, compared to the 2.2 percent increase in 2018's first quarter. (A "second" estimate with more complete data for the second quarter is scheduled to be released Aug. 29.)

The 4.1 percent growth reflected increases in consumer spending, exports, business investments, and government spending, partly offset by a decrease in private inventory investment and housing investment, the bureau reported. Imports — a subtraction in the calculation of GDP — increased in the second quarter.

Trump in July touted the second quarter's 4.1 percent growth and said that as "trade deals come in, one by one, we're going to go a lot higher than these numbers."

That remains to be seen; many independent economists project that the annual real GDP growth in 2018 will be lower than 4 percent. (Here are several reasons why economists are skeptical about Trump's promised GDP growth.)

PolitiFact will continue to monitor annual economic growth under Trump's watch. For now, we rate this promise as In the Works.

New York Times, Trump Claims Credit for an Economy He Calls the 'Envy of the Entire World', July 27, 2018

The World Bank, Global Economic Prospects The Turning of the Tide?

Though the economy has grown, Donald Trump's promise to grow the economy to a benchmark of 4 percent has yet to materialize in his first year in office.

During the campaign, then-candidate Trump promised a substantial increase to the country's gross domestic product, the foremost measure of the national economy. We're tracking Trump's vow to raise the GDP to 4 percent annually, though he promised it could go as high as 6 percent.

"We're bringing it (the GDP) from 1 percent up to 4 percent. And I actually think we can go higher than 4 percent. I think you can go to 5 percent or 6 percent," Trump said at an Oct. 19, 2016, presidential debate in Las Vegas.

The Bureau of Economic Analysis' final tally of the 2017 GDP won't be available until late March. But, meantime, Trump's promise has fallen short in each of the three quarters for which we have data.

The economy grew 1.2 percent in the first quarter of 2017, 3.1 percent in the second quarter and 3.2 percent in the third quarter. Assuming these numbers aren't revised, fourth quarter growth would have to be at least 8.5 percent to reach an annual 4 percent GDP growth rate for 2017, a highly implausible scenario.

"It's safe to say we're not going to hit 4 percent GDP in 2017," said Gary Burtless, a senior fellow at the Brookings Institution.

That said, some of Trump's economic policies have yet to register their full impact. For instance, the Republican tax plan only went into effect at the beginning of 2018. Trump has also touted his deregulatory efforts' potential to unleash further growth.

We'll continue to monitor this pledge. Meantime, we rate this promise In the Works.

Interview with Gary Burtless, a senior fellow at the Brookings Institution, Jan. 4, 2017